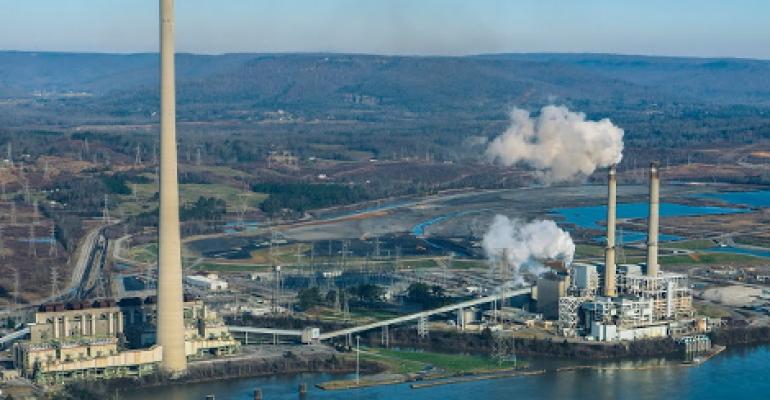 The Widows Creek coal power plant in Jackson County, Alabama. Google plans to build a data center on the site of the power plant, which is scheduled for shutdown. (Photo: Google)
Companies>Google (Alphabet)

Google is planning to repurpose infrastructure of an Alabama power plant that is scheduled for shutdown to build a data center, the company announced today.

The approach is highly unusual, but a lot of power-plant equipment can be reused for a data center project, according to Google. Like in other areas of its operations, the company has never shied away from unusual approaches to data center design and construction.

The company expects to start data center construction on the grounds of the Widows Creek coal power plant in Jackson County early next year. This will be the first Google data center in Alabama and its 14th data center location worldwide.

The power plant has been in operation since the 1960s.

“Decades of investment shouldn’t go to waste just because a site has closed; we can repurpose existing electric and other infrastructure to make sure our data centers are reliably serving our users around the world,” Patrick Cammons, senior manager for Google data center energy and location strategy, wrote in a blog post.

“At Widows Creek, we can use the plants’ many electric transmission lines to bring in lots of renewable energy to power our new data center.”

While Google hasn’t repurposed a power plant before, this is not the first time it has chosen to convert an old industrial site into a data center. The Google data center in Hamina, Finland, is a repurposed 60-year-old paper mill.

In Hamina, Google reused the cooling infrastructure that drew water from the Bay of Finland to cool equipment at the mill for data center cooling.

As the company’s user base grows and as it adds new services, it continues to invest enormous amounts of money in data center construction, as do its rivals in the cloud services business. Data centers power all of Google’s services, and the company has to continue building out this infrastructure to keep up with demand growth.

The company went from running about 100 servers 15 years ago when it started to spending about $5 billion per quarter on building and operating data centers.

As it builds out its global infrastructure, the company also invests in renewable energy to offset carbon emissions associated with the enormous amount of power its data centers consume. Google said it will work with Tennessee Valley Authority, its electric utility in Alabama, to bring renewable energy generation onto the grid that will serve its future data center there.