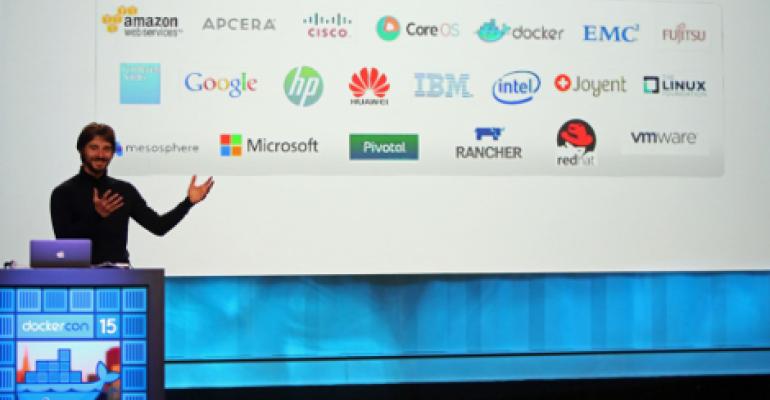 Docker founder and CTO Solomon Hykes on stage at DockerCon 2015 in San Francisco, with logos of the founding members of the Open Container Project in the background (Photo: Docker)
Business

Docker founder Hykes says developers should not be constrained by platforms

SAN FRANCISCO – Few people know that while Docker the company may be only about two years old, work on the technology behind it has gone on for about eight years.

Its approach to packaging software in a way that makes it easy to quickly take an application from the developer’s laptop and deploy it in production in the company’s data center or in a public cloud has drawn a lot of attention from developers and DevOps professionals, and nearly every major IT vendor and service provider has been eager to get on board by either partnering with Docker or at least supporting the technology.

Over the two years that Docker has been in existence, its container software has been downloaded about 500 million times, according to the company’s CEO Ben Golub. About 150,000 “Dockerized” applications exist as of this month, and there are about 40,000 projects that use Docker on GitHub, the popular repository for open source software.

Docker already touts a long list of big-name companies either trying the technology out or (a much rarer case) using it in production. That list includes eBay, Baidu, Yelp, Spotify, Capital One, the New York Times, and the U.S. General Services Administration.

But it took a lot longer than two years to get there. Solomon Hykes, Docker founder and CTO, said his team has been working on the technology, “trying to make it work,” for eight years.

Both Hykes and Golub were keynote speakers at the company’s second annual DockerCon conference in San Francisco Monday.

Their goal, ultimately, is to make the internet programmable.

“The internet is a pretty sweet piece of hardware,” he said. “It’s probably the coolest piece of engineering that we as an industry have created.”

The network has been around for about 50 years. It has continued to scale, and nobody has ever rebooted it for maintenance.

Instead of programming individual devices or systems that are connected to the internet – servers, phones, TVs, cars, sensors, drones, and so on – people should be able to program across all of them. “Is it possible we can take all of that … and make the whole thing programmable?” Hykes asked from the stage.

Five Years to Reach the Goal

A developer today is forced to choose particular platforms and write for them, which is why Docker is building an open software layer it hopes will eventually enable developers to program whatever device is connected to the internet. And they plan to get there in five more years.

“We’ve been doing it for eight years, so what’s another five?” Hykes said.

There’s a consensus that while some end users have managed to build things around it to make it work in production for them, Docker is not ready for prime time just yet. Hykes admitted that there were still a lot of bugs that had to be worked through.

The response from the developer community, however, is a sign that the company’s vision is on point. “Honestly, we think it’s working,” he said. “We think it’s the right way to do it, and we’re going to keep doing that.”

Besides bugs, there is still a number of big infrastructure questions the Docker ecosystem has to answer. The company offered answers to some of them at DockerCon, introducing software-defined network functionality for Docker containers, a new plugin architecture, and improvements to orchestration tools.

It Takes a Village

It’s also not alone in plugging the holes that need to be plugged. In addition to the developer community contributing to the open source project, major vendors and tiny startups are building solutions that make Docker stronger as a platform for production applications.

Google launched a beta release of Container Engine, its cloud service where developers can spin up containers the way they spin up cloud VMs today. IBM launched Docker-based container services on Bluemix, its Platform-as-a-Service offering. VMware introduced AppCatalyst, a hypervisor that simulates a private cloud on a developer’s laptop and includes Docker’s engine for creating hosts for Docker containers.

To ensure healthy growth for the ecosystem around application containers, unencumbered by fragmentation, Docker teamed up with CoreOS, Google, Microsoft and a host of other startups and heavyweights to launch a container standardization effort that’s independent from any one vendor.

There have been fears of fragmentation since late last year, when CoreOS, another rising star on the intersection of software development and IT operations, introduced a container standard and runtime it said were superior to Docker’s. The new Open Container Project with vendor-agnostic governance that’s part of the Linux Foundation seems to provide at least some degree of resolution to what many have referred to as container standard wars.

As if to demonstrate that CoreOS and Docker are back to speaking terms, Hykes shook CoreOS CEO Alex Polvi’s hand from stage Monday, giving him credit for being a major driving force behind the new standard organization.