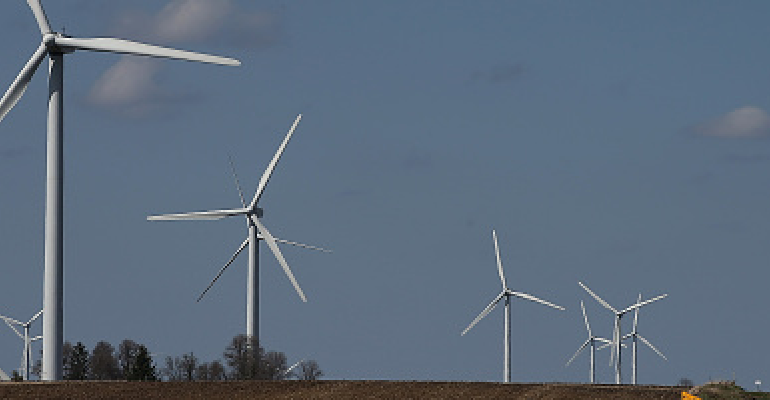 The GE Digital Wind Farm uses cloud technology to boost energy production by up to 20 percent.

The GE Digital Wind Farm uses cloud technology to boost energy production by up to 20 percent. The company announced Tuesday that it is using digital infrastructure along with turbines to help generate up to $50 billion with a new Digital Wind Farm package.

GE Wind PowerUp* technology was introduced 18 months ago and improves turbine efficiency that creates the profitability increase for each turbine. “We envision that we are going to develop many more apps to come, as we work with more and more customers,” Anne McEntree, head of GE’s renewable energy unit told TheStreet. “No one is even thinking about doing what we are launching today, the way we are coupling industrials and big data.”

Greener technology utilizing existing infrastructure is becoming of greater interest to the industry. Last year researchers at Stanford found that current algorithms were causing 80 percent of CPU power to go unutilized. Apple and Google have both worked to increase the efficiency of data centers to make them more sustainable. Data centers account for two percent of all energy consumption in the US and that number is likely to rise as the appetite for cloud services grows.

GE said that it will utilize the existing power grid more efficiently with the GE Digital Wind Farm by using the cloud along with advanced turbines. “Once the turbines are built, their embedded sensors are connected and the data gathered from them is analyzed in real time with GE’s Predix software, which allows operators to monitor performance from data across turbines, farms or even entire industry fleets,” according to the press release. “The data provides information on temperature, turbine misalignments or vibrations that can affect performance.”

The system gathers data about performance and over time uses analytics to become more predictive and more effectively run the turbines. “Big data is worthless without the insight to take action, and our vision for the industry is to use today’s data to predict tomorrow’s outcomes,” said Steve Bolze, president and CEO of GE Power & Water. “By harnessing the full power of the Industrial Internet, we can create a world where wind farms learn, adapt and perform better tomorrow than they do today.”

This first ran at: http://www.thewhir.com/web-hosting-news/ge-launches-digital-wind-farm-with-cloud-infrastructure-to-boost-production-by-20-percent