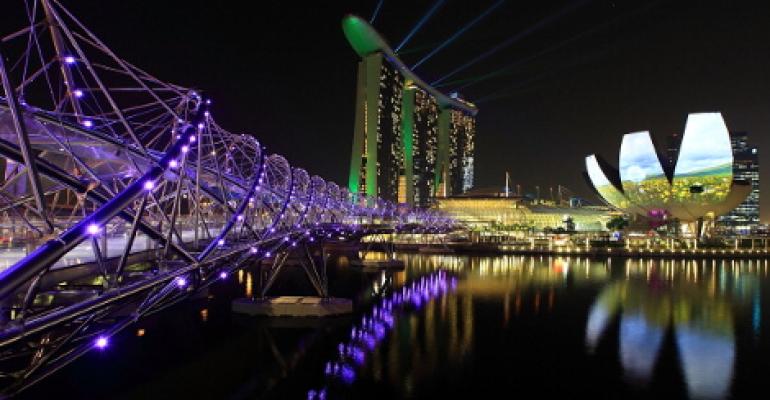 A view of the Helix Bridge, Marina Bay Sands, ArtScience Museum and the city skyline in Singapore. (Photo by Suhaimi Abdullah/Getty Images)
Business

The Allure of Singapore, the World’s Second Gateway to China

IO began as a fairly standard colo company but very quickly differentiated by putting a spin on its business that was unusual in the colocation business: it would provide colo space inside shipping-container-like modules it designed and manufactured at its own factory outside of Phoenix. A customer could also deploy modules in a location of their choosing, with IO providing management services. Finally, you could simply buy an IO module if you wanted to.

It was a colo with a highly differentiated business model that never stopped evolving.

IO’s bold strategic evolution has always been accompanied by its CEO’s equally bold public statements. During a presentation at an industry symposium in 2011, Slessman said that no “snowflake” data center would be built after May 2013. By “snowflake” he meant custom non-standardized data center facilities.

The rather specific prediction was obviously meant to raise eyebrows and help the cause of convincing the industry that IO’s modules were indeed a one-size-fits-all data center solution. Snowflake data centers have not gone away of course. Nobody could accurately predict whether that would happen in 2011, and nobody can today, but the statement served its purpose. The message was out.

Following ‘the Center of the Internet’

His most recent bold statement has to do with Asia. Chinese e-commerce giant Alibaba’s IPO in September – reportedly the largest tech IPO ever – marked the moment when “the center of the Internet moved to China,” Slessman told Data Center Knowledge in an interview.

That bold statement, as customary, was accompanied by a bold move. Earlier this year, Slessman and his wife changed their place of permanent residence from Phoenix to Singapore, and his belief that the center of the Internet was now in China had everything to do with it.

The idea to move to the Southeast Asian city-state came around the time IO launched its Singapore data center in September 2013. “I just became increasingly intrigued with the [Singapore] market in general,” he recalls. 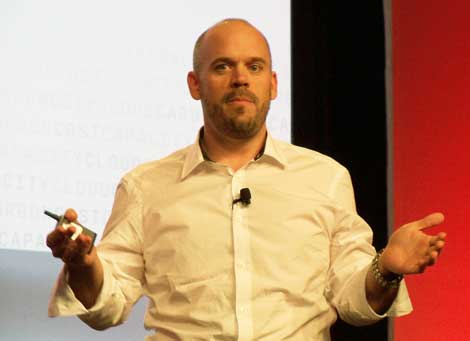 The hundreds of millions of people in Southeast Asia, and the rate of growth in Internet users reminds him of the U.S. a decade or so ago. Alibaba’s blockbuster IPO was a sign that Asian markets were just starting to mature. And, compared to major U.S. metros, the Singapore data center market was fairly open. There are data center providers, but there aren’t nearly as many of them as there are in mature North American or European markets.

“There just aren’t a lot of international companies that want to take the time to understand the local geography and market,” Slessman says. He thinks Singapore will be the largest growth market for IO in the next five years. The company entered the New York market about two years ago, and is now also preparing to launch in Slough, U.K.

The Second Gateway to China

The primary reason the small island nation has such an active data center market is that it has become an Internet gateway between China and the rest of the world, Tan explains. Now on its way to reaching a gateway status that’s on par with Hong Kong, Singapore is where international companies go to serve customers in China, and where Chinese companies go to serve customers in Europe or North America.

Demand is Growing, but so is Supply

Demand for space in the Singapore data center market comes from companies that already have presence there but want to expand as well as from newcomers. “You’re primarily seeing [demand from] cloud and IT service providers,” Tan says. Just this month, CenturyLink announced the launch of a Singapore location for its cloud services, and so did Fujitsu.

There is also quite a bit of demand from financial services companies. One example was Goldman Sachs, which was the anchor tenant at IO’s Singapore data center.

(Watch a video of a motorcade consisting of Goldman’s data center modules and local police on motorcycles rolling through Singapore streets.)

There is also a new local provider called Rack Central that’s “trying to enter Singapore in a big way,” Tan says. Rack Central is an example of a company using the island nation as a gateway to China. It is planning two locations in Singapore and one in China.

Equinix announced the launch of its third Singapore data center this month, its largest in Asia Pacific, and more than a handful of other existing players are looking to expand over the next several years. They include OneNet, Global Switch, Telecom Indonesia, and StarHub, an IO partner. Not all of this capacity is going to come online this year. It will happen over a period of three years or so, Tan says. “I don’t think you’re going to see a supply glut in Singapore.”

Singapore being such a rapidly growing market, Slessman felt it was important for him to be there physically. His vision extends beyond Singapore alone. “We are going to be expanding significantly in the Asian market,” he says. “It’s important to us to have that focus and the clarity of having the senior leadership team there.”

Now that IO has been split into two companies – one of them is IO the colocation provider, and the other is BaseLayer, the maker of data center modules and management software led by Slessman’s brother William – he can focus on growing its colocation business in one of Asia’s hottest markets. Providing senior leadership with the ability to focus on their respective missions was the primary reason given for the split.

But Slessman also simply likes Singapore as a place to live. “It’s the safest country in the world,” he says. “It’s a wonderfully organized, clean, safe place.”

Correction: A previous version of this article incorrectly said that New Zealand's OneNet had major data center presence in Singapore. The company is actually called 1-Net. It's based in Singapore and has no relation to OneNet from New Zealand. Data Center Knowledge regrets the error.