Microsoft CEO Satya Nadella addresses shareholders during Microsoft Shareholders Meeting in December 2014 in Bellevue, Washington. The meeting was the first for Nadella as CEO. (Photo by Stephen Brashear/Getty Images)
Blades

How Microsoft Got Rid of the Big Data Center UPS

Big uninterruptible power supply cabinets and rows of batteries that are similar in size to the ones under the hood of your car have been an unquestioned data center mainstay for years. This infrastructure is what ensures servers keep running between the time the utility power feed goes down and backup generators get a chance to start and stabilize.

But companies that operate some of the world’s largest data centers – companies like Microsoft, Facebook, or Google – are in the habit of questioning just such mainstays. At their scale, even incremental efficiency improvements translate into millions upon millions of dollars saved, but something like being able to shave 150,000 square feet off the size of a facility or improve the Power Usage Effectiveness rating by north of 15 percent has substantial impact on the bottom line.

Those are the kinds of efficiency improvements Microsoft claims to have achieved by rethinking (and finally rejecting) the very idea of the big central stand-alone data center UPS system. The company now builds what essentially is a mini-UPS directly into each server chassis – an approach it has dubbed Local Energy Storage.

This week, Microsoft announced it would contribute the LES design to the Open Compute Project like it has done with the designs of servers that support its cloud services in data centers around the world. OCP is Facebook’s open source data center and hardware design initiative that was started in 2011. Microsoft joined OCP last year and has already contributed two generations of server design specs to the open source project. LES is part of the second one, called Open CloudServer v2, which the company submitted in October. 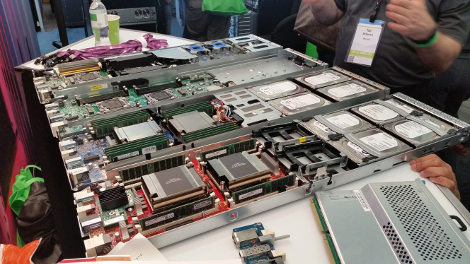 It saves physical space (150,000 square feet for a typical 25-megawatt data center, according to Shaun Harris, director of engineering for cloud server infrastructure at Microsoft, who blogged about LES this week). It is also more energy efficient, because it avoids double conversion electricity goes through in a traditional data center UPS. Finally, Microsoft saves by not adding reserve UPS systems (in case the primary ones fail) and by not having to build a “safety margin” in the primary UPS. Data center designers usually go through a lot of trouble to make sure the central UPS plant doesn’t fail, because if it does, every server downstream will go down when the utility feed fails.

But building less stuff is only part of the story. Another big cost advantage of LES is that it uses commodity components that have been mass-produced for other industries for a long time, so they are less expensive than specialized data center equipment. The design uses battery cells that power cordless hand tools and electric vehicles, which ensures LES can “leverage industry volume economics and supply chain,” Harris wrote.

It also leverages the power train design of power supply units that already ship with every server, using something that has proven itself over time. “The LES design innovation takes commodity energy storage devices (batteries) and an industry proven PSU power train, fusing these together in a single package to maximize energy delivery efficiency and minimize cost overheads.” 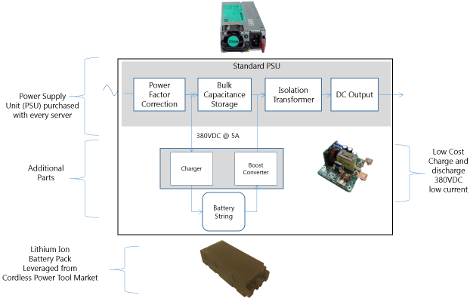 Microsoft’s server and data center engineers are not likely to stop at bringing UPS directly to the IT load. The company is also experimenting with bringing the primary power source all the way to the rack. Last year it announced completion of a proof-of-concept for a design that puts gas-powered fuel cells directly into the server rack, which both eliminates the losses that result from energy traveling through multiple devices before reaching destination and opens doors for using biogas to power IT – something Microsoft has been spending a lot of resources and brain power on.