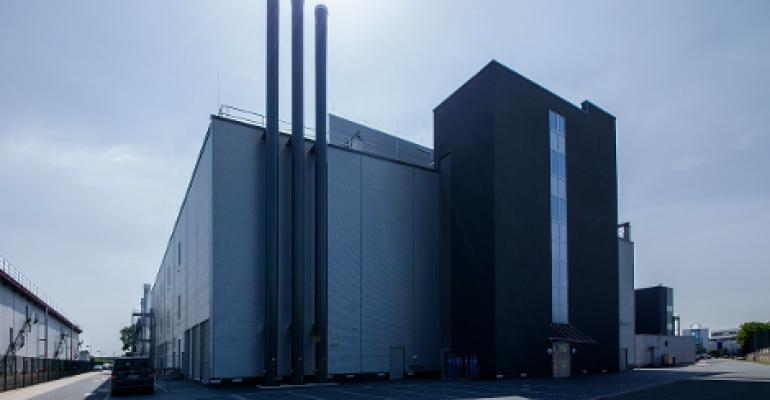 The bulk of e-shelter&#8217;s inventory is on the five-building Frankfurt 1 campus (Photo: e-shelter)
Business

The e-shelter acquisition almost quadruples NTT’s presence in the region.

Balance of power in the European data center market has transformed completely in a matter of a few weeks as a result of two big acquisitions – one announced in the first half of February and the other just this week.

The e-shelter acquisition almost quadruples NTT’s presence in the region, putting the Japan-based telecommunications and IT services company in a much stronger position to compete for multinational-client deals with Equinix and the giant that resulted from the fusion of TelecityGroup and Interxion. Also, following the deal, two-thirds of NTT’s data center space is now outside of Japan.

The main reason NTT agreed to dish out €742 million for a nearly 90-percent stake in e-shelter and its 775,000 square feet of data center space is that it cannot build data center space in Europe fast enough to satisfy the demand, Chris Davis, NTT’s senior director of marketing for the Americas region, said. “We’re building data centers as quickly as we can, but we needed the acquisition to quicken the pace,” he said.

German real estate developer Investa Holdings will retain a minority stake in e-shelter. E-shelter founder and CEO Rupprecht Rittweger owns a controlling interest in Investa. The developer held a 51-percent stake in e-shelter. The remaining shares were owned by the Boston-based private equity firm ABRY Partners. More than half of e-shelter’s new board of directors will be appointed by NTT.

Its customers want data center space in Europe, and e-shelter provided an opportunity to expand presence in another one of the region’s major business centers. NTT already has huge presence in London, with nine existing data centers there and one more under construction. Elsewhere in Europe, NTT has one data center each in Madrid, Paris, and Frankfurt. With the most recent deal, however, the company is going from having one data center in Frankfurt to being the largest provider in the German data center market.

The bulk of e-shelter’s inventory is on its five-building Frankfurt 1 campus, which has its own 120-megawatt substation. The company has two more sites in Frankfurt, two in Munich, and one each in Hamburg and Berlin. E-shelter also has data centers in Zurich and Vienna.

A Steady Diet of Acquisitions

Expanding its global data center inventory through acquisition has been a big part of NTT’s strategy in recent years. Its big famous deal was the $3.2 billion takeover of South African IT outsourcing giant Dimension Data in 2010, but that deal was about much more than just data centers. NTT has made numerous data center-focused acquisitions following the 2010 blockbuster.

NTT owes its massive London footprint primarily to its acquisition of a controlling stake in a company called Gyron in 2012. It has been growing its portfolio in London since the Gyron deal, the most recent example being the upcoming launch of a large data center near the London Heathrow Airport.

While it provides managed hosting, private, and public cloud services, the bulk of the company’s revenue comes from colocation, Davis said. Leveraging its global network, the company differentiates through vertical integration, providing a full package of services at global scale, unlike Equinix, which provides data center space and network access but chooses not to provide services higher up the stack on its own, relying instead on partners that use its facilities.

It places a lot of focus on multinational players, trying as much as possible to give them a consistent data center user experience everywhere around the world. The company has a dedicated team that facilitates international data center topology expansion for customers.

And a lot of its customers want to be in Europe – demand it is now in a much better position to satisfy.