What Interxion and TelecityGroup Merger Means for Europe's Colocation Market

Interxion and TelecityGroup merger would leapfrog Equinix as the top player in Europe and better position them for global expansion.

The merger between Interxion and TelecityGroup, two of Europe's top data center providers, changes the European colocation landscape and puts the company in better position to expand globally. The companies announced the deal earlier this week.

The merged company would leapfrog Equinix and take over a clear leadership position in the EMEA market, according to Synergy Research Group. TelecityGroup and Interxion have been in a close fight for second place behind Equinix in several of the region's markets.

Besides being a formidable player in the major markets, the new company will be top-ranked in terms of total footprint outside of the big four.

U.K. is recognized the largest colocation market in Europe, followed by Germany, France, and the Netherlands. These four countries account for majority of the region's colo revenue.

The merged company will be the biggest in the U.K. and Netherlands and third in Germany and France, according to Synergy Research. It also leaps to second in the fifth- and sixth-largest emerging markets of Spain and Switzerland, respectively.

Equinix has 1.4 million square feet of space in the larger EMEA (Europe and the Middle East) region across 32 data centers. Telecity and Interxion combined have just under 80 data centers, though total square footage is not known. 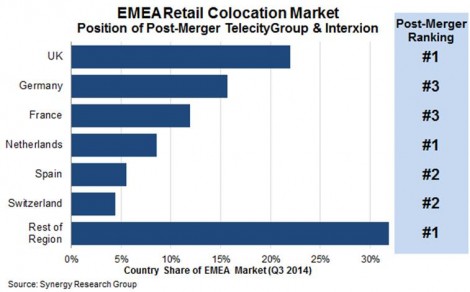 While the merger creates a company with massive footing in Europe, Equinix believes its global footprint gives it an edge.

“There’s no question that positive secular trends, including cloud, big data and mobile, are driving significant data center demand around the world, so this announcement is in line with what we’re seeing in the market,” said Eric Schwartz, president of EMEA at Equinix. “And, as enterprises operate increasingly interconnected, on-demand business models, it’s imperative they have a global data center strategy. Today, more than half of Equinix's business is derived from customers located in all three of the regions in which we operate — EMEA, Asia-Pacific, and the Americas — because they can access a critical mass of networks and easily connect to leading cloud services.”

The merger has repercussions outside of Europe as well, Jabez Tan, senior analyst at Structure Research, said. He believes that the deal positions the company better on a global basis.

“The merger essentially settles strong internal competition in Europe between both sides,” he said. “Telecity will soon be able set its sights on global expansion outside Europe with core international markets, such as the United States, Singapore, and Hong Kong, being likely candidates for future expansion plans.”

"While the company is in good position, the overall market itself is also showing healthy signs," John Dinsdale, chief analyst and research director at Synergy Research, said. Retail colocation market continues to grow about 10 percent per year, boosted by trends in big data, cloud services, outsourcing, video and social networking.