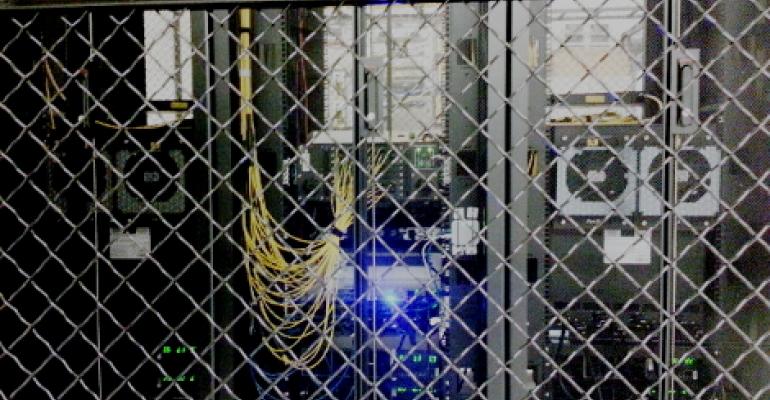 The AMS-IX Bay Area Internet exchange equipment inside a cage in one of the meet-me rooms at Digital Realty Trust&#8217;s 365 Main data center in San Francisco (Photo: Yevgeniy Sverdlik)
Colocation

AMS-IX USA, subsidiary of AMS-IX, operator of the Amsterdam Internet Exchange, is planning to put a Point of Presence at the Telx data center within the Google-owned carrier hotel and office building at 111 8th Ave., New York.

The New York IX PoP is the latest in a series of recent moves by the European Internet exchange giant to expand in the North American market. After signing agreements to put PoPs in four New York metro region data centers in 2013, last year AMS-IX put one at CME Group’s Chicago data center at 350 E. Cermak and expanded to West Coast with PoPs at Digital Realty and CoreSite data centers in San Francisco and Silicon Valley, respectively.

AMS-IX is a member of Open-IX, an effort by a group of companies, including Akamai, Netflix, and Google, to establish member-run Internet exchanges (similar to the exchange model widely used in Europe) that extend across multiple data centers in a metro. The ultimate goal is to bring more diversity to an exchange market currently controlled by a handful of data center providers, including, to the largest extent, Equinix.

The Telx data center where the new New York IX PoP by AMS-IX will be located is in one of the most connected buildings in the world, making it a key network interconnection hub. Besides all the carriers that have equipment in the building, there are also lots of data center providers.

One of the providers that had to move out because its lease was expiring was Internap, which relocated to a brand new data center in New Jersey last year. Telx CEO Chris Downey told us earlier that the provider was not facing a looming end of lease in the building. Its current lease will not expire for several decades, he said.

Companies peering on the AMS-IX exchange at 111 8th Ave. will also be able to peer with customers at the other two Telx data centers in Manhattan: 60 Hudson St. and 32 Avenue of the Americas.

“With several potential and existing AMS-IX customers within Telx’s data centers facilities, NY2 [name of the data center at 111 8th Ave.] is the perfect location for us to expand the AMS-IX New York platform and further grow our community,” Job Witteman, CEO of AMS-IX, said in a statement.