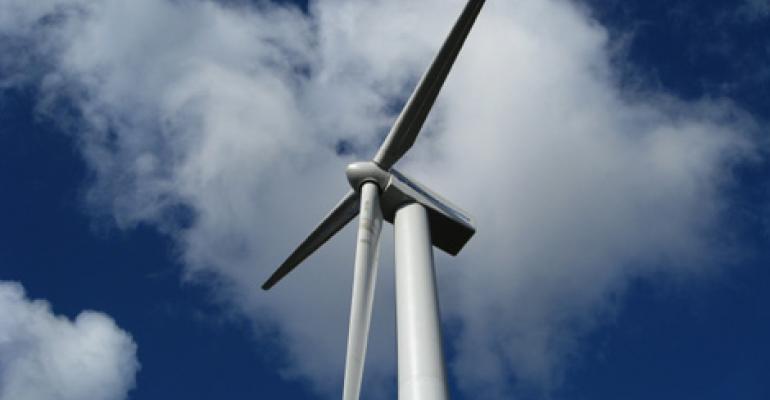 A 131-foot tall wind turbine at Other World Computing in Woodstock, Illinois.
Design>Power and Cooling

Amazon Web Services has signed a long-term power purchase agreement with developer of a wind farm in Benton County, Indiana, the cloud services provider announced Tuesday. The agreement will help the world’s largest provider of cloud infrastructure services make good on the commitment it made this past November to power its operations, including a fleet of massive data centers, entirely with renewable energy.

AWS has been one of the big Internet businesses Greenpeace has been calling out for powering their data centers with dirty energy. AWS and others, companies like Google, Facebook, Microsoft, and Twitter, are large customers that utilities covet, so they have bargaining power to pressure utilities to clean up their fuel mix, Greenpeace has argued.

Google has been using PPAs, among other instruments, to make its operations carbon neutral. Facebook and Microsoft started doing the same more recently. Microsoft’s biggest PPA to date was for 175 megawatts with a wind farm developer near Chicago, announced last July. Facebook’s big wind investment was in a wind farm project in Iowa, announced in November 2013.

The future 150 megawatt wind farm in Indiana, which will actually be called the Amazon Web Services Wind Farm, is scheduled to come online early next year. It will generate about 500,000 megawatt hours annually, according to AWS, which has a 13-year PPA with Pattern Energy Group, the project’s developer.

Jerry Hunter, vice president of infrastructure at AWS, said the farm will feed clean energy into a grid that feeds a large number of Amazon data centers. “This PPA helps to increase the renewable energy used to power our infrastructure in the U.S. and is one of many sustainability activities and renewable energy projects for powering our datacenters that we currently have in the works,” he said in a statement.

Greenpeace has criticized Amazon for not providing specifics about the energy mix that powers its data centers and also about the tactics it planned to use to achieve its goal of fully renewable operations. The environmentalist organization welcomed Tuesday’s announcement, but pointed out that it will take much more to achieve the renewable-energy goal.

The bulk of Amazon data center capacity is in Virginia, served by Dominion Power, a utility whose fuel mix includes only 2 percent of renewables, the rest coming from coal, nuclear, and gas-powered plants, according to Greenpeace. The company is expanding its capacity in Virginia substantially. A developer is building a massive data center for it in Ashburn (the one that caught on fire earlier this month). Dominion has also filed plans to build a high-capacity power transmission line for future data center in Haymarket, whose tenant will reportedly be Amazon. Dominion’s plans have run into strong opposition from a group of Haymarket residents.

“The massive size and rapid growth of Amazon Web Services’ infrastructure makes clear that Amazon’s Indiana wind farm ought to be the first of many similar investments,” Greenpeace senior energy campaigner David Pomerantz said in a statement.