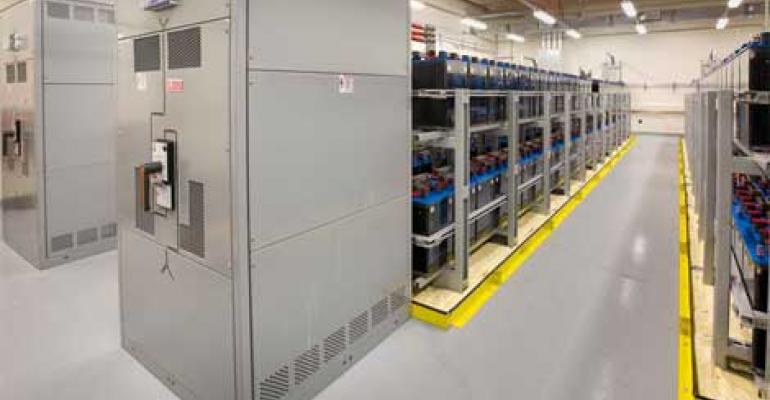 One of the battery rooms at ByteGrid&#8217;s MDC1 data center in suburban Maryland. (Image: ByteGrid)
Business

A lot of building and leasing activity continues to occur in core data center markets like Ashburn, Virginia, New York, and Santa Clara, California, but activity is also on the rise in smaller U.S. markets, in cities like Cleveland, Tampa Bay, Florida, and Pittsburgh, Pennsylvania.

A sizable enterprise base looking to operate fewer on-premise data centers and content and cloud providers' desire to host content and infrastructure close to users means unprecedented activity in cities not traditionally known for their data center industry.

Several providers that focus on finding these non-core markets where demand outpaces supply have emerged. They are using different strategies to tackle the opportunity.

As more applications and services are being outsourced to the Web, data centers are being built closer to end users, Gillis Cashman, managing partner at M/C Partners, explained. The private equity firm recently invested $50 million in Involta, a data center provider that has strong market positions serving enterprise customers in places like Akron, Ohio.

“In smaller markets, people have built their own data centers,” Cashman said. “They are coming to end of life, and there is a new wave of demand. [In] many of these smaller markets, the requirements are exactly the same as Tier I markets. The interesting dynamic is they lack of quality, highly redundant enterprise-grade infrastructure.”

vXchnge is another company that focuses on high-growth markets. The company exists thanks in part to the acquisition of Switch & Data by Equinix in 2009. Several Switch & Data executives joined a number of others others to form the company. Switch & Data operated in many secondary markets.

“Knowing where we operated, there’s a lot of obsolescence out there,” said Ernie Sampera, vXchnge chief marketing officer. Sampera was formerly with Switch & Data, and believes high-density needs are particularly underserved. “There are a lot of legacy data centers that can’t accommodate [high-density infrastructure], and it’s too expensive to build new or retrofit."

Many of the former Switch & Data facilities ended up in the hands of another player now working in Tier II markets. In 2012, 365 Main co-founders Chris Dolan and James McGrath resurrected the brand by acquiring 16 data centers from Equinix, seeing an opportunity to create a “national player with a local focus.”

John Scanlon, 365 CEO, sees a big opportunity in markets not traditionally known for data centers. 365 looks for underserved cities and locates in carrier-rich convergence points rather than building new facilities. He cites demographics and ongoing investment in backbone infrastructure as two reasons for these markets' potential.

"We like that downtown data center that is highly interconnected with adequate battery and backup – downtown sits on the ‘battle grids’," said Scanlon. "These cities have gone through a lot and they persevered.”

He said the trend was a rebirth of Tier II cities. “There’s a demographic trend occurring in these cities. There are millennials who want to live in or around where they work, so there’s a lot of construction around the cities. There needs to be access to broadband, to have the consumption and use of technology.”

Another example is ByteGrid, a wholesale player that goes into markets where it believes there’s healthy demand but low supply or a complete lack of wholesale options. The company said it completely sold its first phase ahead of opening of its facility in Cleveland.

“Our business model is predicated on the fact that there’s demand and opportunity in secondary markets,” said Ken Parent, CEO of ByteGrid. “A lot of people think that everything is happening in primary markets.”

Moving Up the Stack in Growth Markets

A lot of business in secondary markets comes from small and medium-size businesses, and many providers are finding that these customers need a variety of services in addition to space and power. This is what was behind 365's introduction of cloud storage services, and ByteGrid’s acquisition of managed hosting provider NetRiver.

“These markets have the best of both worlds,” said Parent. “In Cleveland, there are good large enterprises but you also have a lot of smaller customers. With more of the SMB market, you need to deliver a product that has services atop. It’s a different kind of customer and you need to adapt your business model. It’s why we started moving up the stack and looking at managed services as acquisition targets.”

Living on the Edge

Bringing content and cloud services closer to customers are important drivers for data center growth in Tier II markets. Instead of having 50 servers in one data center in the middle of nowhere, Cashman said, there are now 50 servers in 50 data centers very close to the end user.

Key inhibitors of cloud computing are application performance and security, he said. “It’s not a broad statement that applies to every app, but for the most part, proximity to the data center is increasingly more important.”

“A movement to the edge coupled with increasing metro investment of infrastructure make these areas promising data center markets,” said Sampera. “There’s good connectivity, 4G and LTE investment, good Wi-Fi. You’ll see the secondary, growth markets growing. There’s enough population density. Why would you long-haul from Reston when you can implement in a metro?”