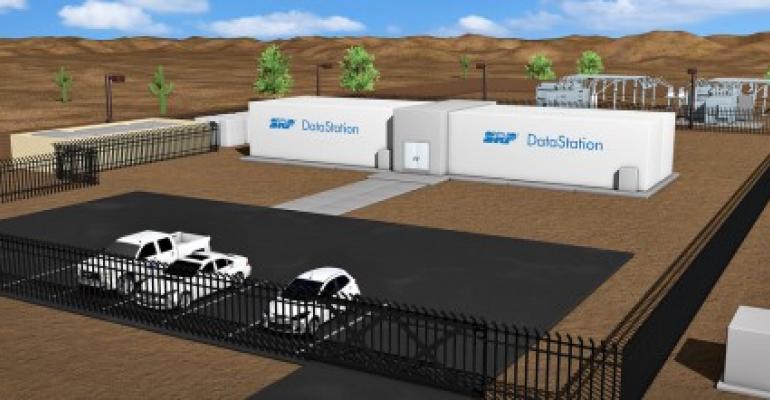 There is only so many ways to build a data center without a generator or some other kind of backup power source and still have the level of reliability companies that rely on their applications to stay up around the clock need.

One way is to feed the data center power directly from more reliable parts of the grid. BaseLayer, the company in the process of being spun out of the Phoenix-based data center provider IO, has partnered with Phoenix-area public utility Salt River Project to attempt just that.

SRP is going to deploy a BaseLayer data center container near one of its generation plants. The data center will receive power directly from a “bulk transmission” line, which is more reliable than distribution infrastructure, since, as the name implies, it is designed to transmit massive amounts of electricity over long distances.

To date, the most prominent example of a production data center that does not rely on generators for power backup is eBay’s latest facility in Salt Lake City, Utah. The data center is powered by fuel cells that convert natural gas to electricity and uses the local utility grid as backup.

Researchers at Microsoft have been other ways to get rid of the generator. One idea is to put a data center module at the site of a waste treatment plant and use fuel cells to convert biogas the plant generates into electricity for the data center. Microsoft has a proof of concept for this idea running in Wyoming.

SRP and BaseLayer’s deployment will also be a pilot project.

“It’s currently a proof of concept until we have the data to be able to show that it’s commercially viable,” William Slessman, BaseLayer CEO, said. “We believe that we can remove … need for generation or UPS capabilities.”

There isn’t an established system do validate reliability of the solution, such as the Uptime Institute’s Tier rating, so it is important to do the pilot and have a third party evaluate it, Poole explained.

Official availability of the bulk transmission line where the first “DataStation” will be installed is 99.99999 percent, but that number is conservative, according to Poole. “Our engineers allow me to say seven nines,” he said.

Since the data center will receive two redundant power feeds from the grid and since there will be no transfer switch in the power chain (fewer components usually means better reliability), he expects that availability number to be even closer to 100 percent than the official estimate.

SRP will operate the DataStation, but the model can be different if proven out and adopted by others. A company may buy a module (or several), deploy it on a utility’s property, and outsource management to a third party. In another possible model, a data center service provider may own and operate the modules and lease the space within.

For the utility there’s the immediate commercial interest of being able to sell power to customers with extremely high but steady load. Utilities value customers like that, since predictability of demand enables them to operate more efficiently.

But there is also potential long-term benefit for electrical utilities. Since more and more data centers are being built and data center power demand continues to grow, being able to put them next to transmission lines means utilities or independent grid operators will not have to make big investments in expanding transmission infrastructure to meet the demand, Poole explained.

For SRP, there is also the interest in selling connectivity services on its fiber network, which spans its entire bulk transmission system and parts of its distribution infrastructure and connects to major meet-me rooms throughout Phoenix. It is a “full-on commercial network,” Poole said.

The container SRP is going to use is BaseLayer’s next-generation Edge module. It is designed specifically for being deployed outdoors.

A single module will contain all necessary cooling and power distribution equipment and SRP’s particular model will support 500kW of IT load across 20 cabinets, but the design will be able to support higher densities too, Slessman said.

BaseLayer is a new company. It is one of the two companies that resulted from the split of data center service provider IO announced earlier this month. The other company will continue to be called IO.