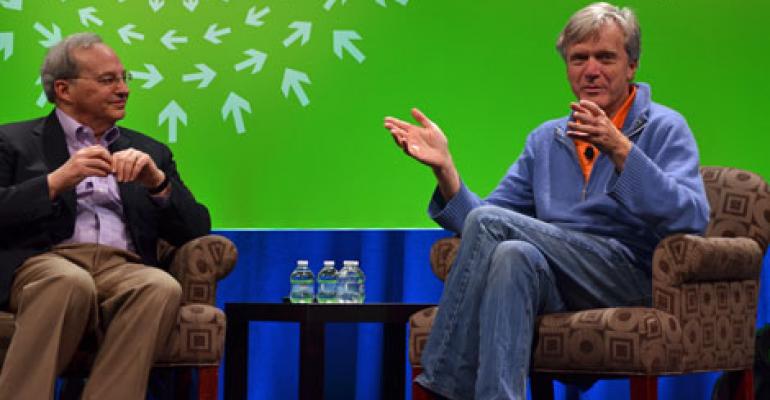 Arista Networks’ founder Andy Bechtolsheim (right) also co-founded Sun Microsystems and was one of the first two people to invest in Google. Here, he is speaking with Intel CTO Justin Rattner on stage at the 2013 Open Compute Summit in Santa Clara, California.
Design>Networks

Arista CEO on Cisco’s Lawsuit: “It’s Not the Cisco I Knew”

Leadership “disappointed” Cisco resorted to litigation instead of competing on products

Saying they have not had the chance to go over the details of accusations in Cisco’s litigation against the data center network technology vendor, Arista Networks management said the move was unbecoming of a market-leading company.

“While we have respect for Cisco as a fierce competitor and the dominant player in the market, we are disappointed that they have to resort to litigation rather than simply compete with us in products,” the company’s official statement in response to the two patent and copyright infringement lawsuits brought Friday read.

An Arista spokesperson emailed us a personal statement by the company’s president and CEO Jayshree Ullal, who said she was “disappointed at Cisco’s tactics. It’s not the Cisco I knew.”

One of the suits accuses Arista of using 12 features in its products covered by 14 U.S. patents the San Jose, California-based networking giant holds. The other suit accuses it of copying and pasting chunks of Cisco’s copyrighted product manuals into its own manuals and of ripping off command line interface expressions used in Cisco’s IOS software for its own EOS software.

Blow to a Quickly Rising Giant

The company had a successful IPO on the New York Stock Exchange in June. Its shares were down 6 percent Friday afternoon, following the lawsuit announcement. Arista’s current market capitalization is about $4.5 billion.

The company was founded by Andy Bechtolsheim, a co-founder of Sun Microsystems (now owned by Oracle). Bechtolsheim is also known to have been one of the first two people to invest in Google in the late 90s, when the company was just starting out.

Another company Bechtolsheim founded, a Gigabit Ethernet startup called Granite Systems, was acquired by Cisco in 1996. He served as vice president and general manager of Cisco’s Gigabit Ethernet business unit from the time of the acquisition until 2003, overseeing the development of Cisco’s Catalyst 4500 family of switches.

Arista’s deep Cisco roots will play a big role in the current litigation, since the technologies named in one of the lawsuits “were patented by individuals who worked for Cisco and are now at Arista, or who at Cisco worked with executives who are now at Arista,” according to a blog post by Cisco General Counsel Mark Chandler.