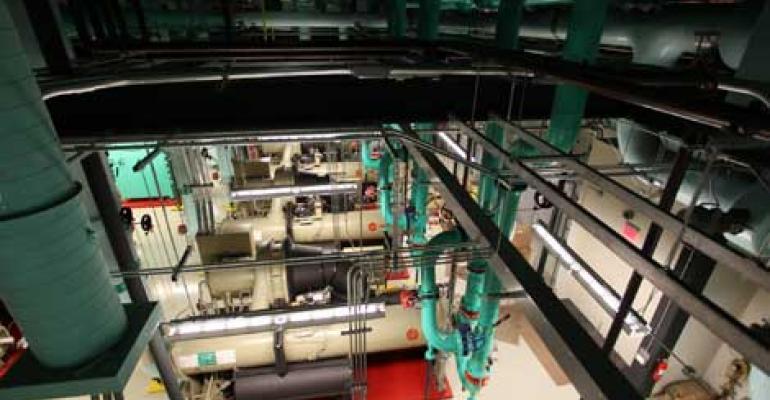 A top view of the chillers in Equinix NY4.
Business

In Americas, Equinix Focused on Brazil and New Jersey Markets

As it builds out is footprint in New Jersey and Brazil, Equinix is expanding its Business Suites product (an offering closer to wholesale) and positioning another new product, Performance Hub, to capture enterprise demand. Karl Strohmeyer, the company's president for the Americas, gave us an update on its strategy in the region.

Equinix has had a majority stake in ALOG since 2011 and finally acquired the company in July. ALOG gave Equinix home footing in Brazil in the form of four data centers, two in São Paulo and two Rio de Janeiro, the two largest markets in the country. The company just kicked off Phase Two of the RJ2 data center in Rio de Janeiro.

RJ2 is the first Tier III Certified data center in the city of Rio de Janeiro, as well as one of the biggest data centers there at over 160,000 square feet. A rain water harvesting system is one unique touch, expected to reduce water consumption by 70 percent.

Strohmeyer is optimistic about the South American market. “It’s in a unique position – Brazil’s an interesting dichotomy, because it’s closed, but for communications, it’s one of the fastest growing regions in the world,” he said. “It’s also one of the largest, if not fastest growing. We expect that to continue.”

The data center will be one of the first Equinix facilities to have dedicated space for containers, which will allow customers to ship and drop in their infrastructure within an Equinix data center. Strohmeyer notes that the company is seeing an increase in cross-border business, with containers one potential avenue for those global companies looking to establish presence in Brazil.

Equinix data centers all share a certain aesthetic, and this is true with the four Brazilian data centers that came with ALOG acquisition. “It’s been three and a half years, the company was funded and built within that time frame,” said Strohmeyer. “It looks like a purpose-built Equinix building. It’s important that when a customer deploys anywhere in the world that they get the same experience and SLAs.”

The Business Suites are a departure from the traditional Equinix retail colocation model. Each business suite is a dedicated room with keycard access. The product is currently available only in DC10 in Ashburn, Virginia, but Equinix is constructing its NY6 facility in Secaucus in a similar fashion.

Business suites are a way for someone with a larger footprint requirement to tap the interconnection benefits of Equinix in more of a wholesale type setting. Most of the inventory in DC10 was sold out as of last May.

Ashburn and New York are obvious choices for Business Suites, as they’re the two largest data center markets in the country. Despite performing well, there are currently no plans for a wider rollout.

“We have positioned Platform Equinix as a key part of [the enterprise’s] IT infrastructure and it’s really taken off,” said Strohmeyer. The cornerstone of this effort is Performance Hub.

“It’s a bit of a Trojan horse – they start with three-four racks across the globe and a lot of interconnection. Once they see the power of a third-party data center, they then start growing their deployments.”

Cloud Has Been Good for Equinix

Not only have cloud providers proven to be desirable customers, data center providers enabling cloud usage in general have been a boon. Equinix recently noted cloud connectivity is its fastest growing segment; Stohmeyer reiterated cloud's place in the Equinix strategy. Through providing easy connectivity, Equinix has been marketing toward hybrid and multi-cloud usage to entice enterprises.

Consider this stance versus what some pundits originally thought cloud would do to the data center industry. Jim Cramer advised his Mad Money viewership to get out of data center stocks because cloud was a risk twice, once in 2009 and again in 2011.

Most recently, IDC said that cloud was one contributing factor to what it predicts will be a decline in the number of data centers. The biggest cause of the decline is not a slowing of the colocation industry, but declining enterprise data center growth and outsourcing. This is positive for colocation providers also offering cloud connectivity, and Equinix wants to capture that business.

“We love what cloud is doing to the proverbial basement,” said Strohmeyer. “It’s forcing the CIO to think about how they move workloads away from their own data stores. It’s a catalyst for a bigger architectural discussion.”