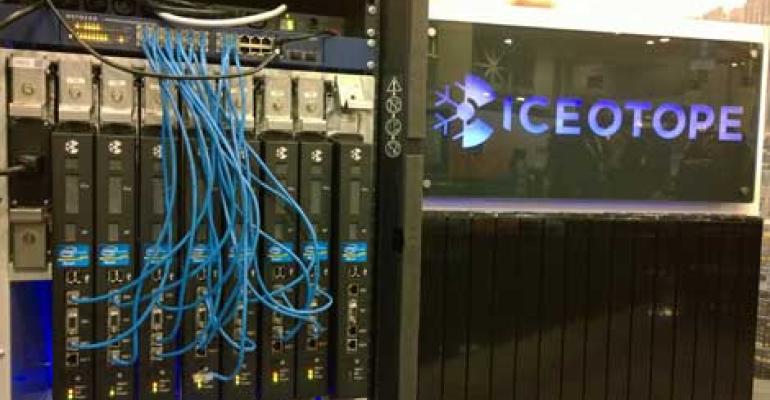 One of Iceotope&#8217;s liquid cooling systems on display at the SC14 conference this week in New Orleans, where the company has launched its new PetaGen design. (Photo: Rich Miller)
Business

NEW ORLEANS, La. - Cooling specialist Iceotope has introduced a new version of its liquid cooling solution, a design known as PetaGen that supports extreme levels of power density and energy efficiency. The new design, which was introduced at the SC14 supercomputing conference, is the culmination of a five-year journey from its debut to production-ready systems.

UK-based Iceotope is among a handful of vendors offering liquid cooling solutions for the data center market, seeking to help companies retool their infrastructures to handle the demands of cloud computing and big data crunching. Earlier this year, the company's technology received a major vote of confidence in the form of a $10 million investment from Aster Capital and Ombu Group, along with a strategic sponsorship with global energy conglomerate Schneider Electric.

Iceotope and other vendors in the space are fueling a renaissance of sorts for liquid cooling in data centers. The idea of bringing liquid coolant directly to the source of heat in the server took a back seat to air cooling in the 80s, but has recently seen growing interest in the market as processors get ever more powerful and data center operators look for ways to reduce the spend on their power-hungry mechanical cooling systems.

In Iceotope’s approach, each server motherboard is completely immersed in a sealed bath of liquid coolant, which passively transfers heat away from the electronics. The system is nearly silent and requires no cooling outside the cabinet, which could allow data center operators to eliminate expensive room-level cooling systems.

In unveiling PetaGen at SC14, Iceotope is pitching its offering to end users focused on high performance computing (HPC), where extremely dense compute loads are ideal for non-traditional liquid cooling solutions. PetaGen is available in several form factors, supporting up to 60kW of IT loads housed in 72 blade servers powered by Intel Xeon chips. The company says the design can reduce power usage to a partial Power Usage Effectiveness (pPUE) of less than 1.1.

Iceotope founder and Chief Visionary Officer Peter Hopton says PetaGen is designed for to cool high-end processors that are increasingly being used for big data and cloud workloads.

"Some of these top-end chips are, for lack of a better term, un-coolable for other liquid cooling systems," said Hopton. "PetaGen was designed to eliminate waste from IT and our new system has the capacity to help solve some serious problems caused by and facing the digital economy today."

An Opportunity in Heat Recycling

Iceotope's design uses a heat exchanger that transfers heat from the cooling liquid (3M's Novec) to a water-filled cooling loop, which can operate with water as warm as 113 degrees F (45 degrees C). After the heat exchange, this water is hot enough to be useful in district heating systems that can warm greenhouses, buildings and even homes. The company sees this as a better option than the cooling towers used in air-cooled systems, that can require large volumes of water.

"Most people don't realize that modern IT use, along with today's 'always-on, always-connected culture is hugely damaging in terms of its environmental impact," said Hopton. "We need to re-evaluate how we use IT now and how we design, build and operate the data center."

Liquid cooling allows users to save on space and energy and support higher densities. But it also tends to have higher up-front costs than traditional air cooling, and has been lightly adopted in traditional data centers, where new technologies gain traction slowly. But the HPC sector lives at the cutting-edge of compute loads, and is pushing barriers of density and cooling capacity.

The first generation of Iceotope's technology was installed at at the University of Leeds in early 2012, and the Poznan Supercomputing and Networking Centre in Poland.