Survey: Nearly Everybody Will be Using DevOps by End of 2015

Rackspace-commissioned survey finds that rapid industry-wide shift to a blended approach to software development and IT operations is inevitable.

DevOps adoption is expected to reach 93 percent by the end of 2015, according to a new survey commissioned by Rackspace. A big portion of that number consists of respondents who have already implemented DevOps practices (66 percent), with more than a quarter of respondents planning to implement DevOps by the end of the year. A significant majority (close to 80 percent) of respondents are using some sort of outsourced DevOps services, a key finding for providers that have services that help customers use DevOps tools and practices, such as Rackspace.

DevOps combines many of the roles of systems administrators and developers. It is a set of principles driving greater collaboration between the different groups responsible for taking a product or service to market. IT automation products are DevOps tools, and agile software development is the cornerstone of DevOps, as the overall environment is becoming more dynamic. Major technology shifts of Internet business and collaboration technologies, open source software, and cloud computing are prompting the shift.

Rackspace has reason to both commission the survey and tout the results. It has been building up its DevOps services, and the survey supports this strategy. The Texas company has focused on managed services for cloud in order to distance itself from other cloud infrastructure service providers.

It’s known for its “Fanatical Support,” a message and philosophy the company is evolving for the cloud services world. Fanatical support extended to DevOps and automation last year, and 18 new services were launched this year. DevOps Automation is the highest tier of managed services.

Vanson Bourne performed the study, interviewing around 700 IT decision makers across the U.S., U.K., and Australia. The key takeaways, according to Chris Jackson, CTO of DevOps at Rackspace, are that the operations team is the primary driving force behind the change to DevOps, and customer satisfaction is the biggest benefit.

Given that DevOps is still in its infancy, such high penetration is almost hard to fathom. It is also hard to capture the maturity and stage of a company's DevOps transition. The survey does examine which DevOps practices have been implemented, with half saying that development and operations teams have been fully integrated, suggesting mature DevOps adoption: 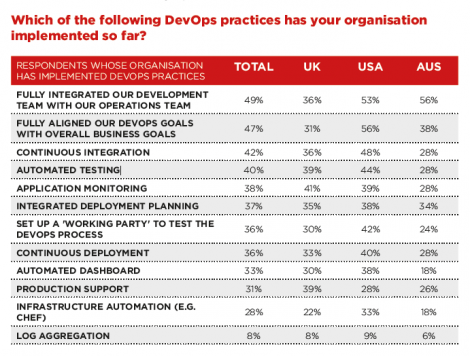 A granular breakdown of how DevOps is being executed across the organization, courtesy of Rackspace

The survey shows that DevOps is important, almost all companies strategizing how to move to this approach. The key priority for future implementations is to align DevOps goals with business goals.

“The results of the DevOps Adoption Study validate that there is significant recognition among global businesses that DevOps is fundamental to fully exploiting the cloud in the pursuit of driving rapid innovation," said Prashanth Chandrasekar, general manager of Rackspace’s DevOps Business Segment.

What's the big deal about DevOps?

The biggest business benefit of switching to DevOps is the increase in customer satisfaction (over 60 percent), according to the survey. Other benefits include a reduced spend on IT infrastructure and a reduction in application downtime or failure rates, cited by about half of respondents as the biggest benefits. One third reported increase in sales and employee engagement as the benefits. 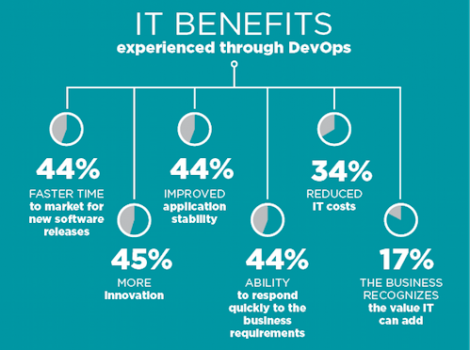 Over 700 IT decision makers breakdown the IT benefits of DevOps (Source: Rackspace)