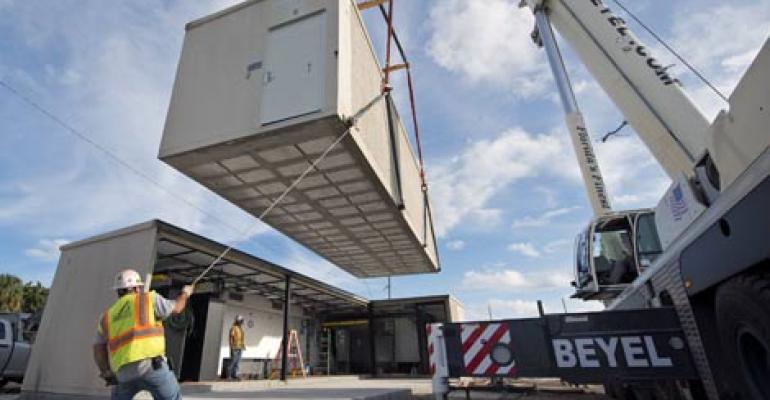 A segment of an Allied Fiber colocation facility is lowered into place by a crane. (Photo: Allied Fiber)
Business

The company is building a series of local Internet on-ramps and off-ramps, tapping dark fiber and modular data centers to bring the core of the Internet closer to the edge of the network.

Jumping onto the fast lane of the Internet usually means finding an on-ramp in one of the major Internet peering points in big-city data hubs. Allied Fiber is seeking to change this by creating on-ramps and off-ramps everywhere, tapping dark fiber and modular data centers to bring the core of the Internet closer to the edge of the network.

Allied Fiber CEO Hunter Newby has been quietly building this dark fiber network since 2010. Last week the company announced a milestone, signing a deal with Summit Broadband, which will expand its operations using colocation facilities along a new dark fiber route in Florida.

Newby called the Summit Broadband deal "a perfect fit with our mission of linking the submarine cable systems in the United States while also providing direct, physical access for all local communities along the way."

Allied Fiber's business is built atop dark fiber capacity: fiber-optic cabling in underground conduits that is yet to be "lit" with Internet traffic. It is building network-neutral dark fiber routes along railway lines owned by Norfolk Southern Railway. Unlike most fiber routes, which operate like a limited-access highway between two points, Allied Fiber uses a system of ducts to provide periodic on-ramps and off-ramps. Better access to dark fiber could improve connectivity to wireless towers and rural networks outside of major markets, bringing the concept of a data center "meet me room" (MMR) to new geographies.

This type of network access requires both fiber and facilities. Newby is using modular data centers to create low-cost colocation facilities along Allied Fiber's network. By placing network equipment in these colo centers, Summit Broadband can allow users in places like Rockledge, Florida to tap the connectivity of its global backbone through the undersea cables at a landing station in Boca Raton.

Allied Fiber envisions a network of carrier-neutral facilities that can bring the rich connectivity of big-city network hubs to second-tier markets along their route.

"We are one big, distributed neutral colo," said Newby, who was an early innovator in the interconnection model as Chief Strategy Officer at Telx. "I want to create and breed a thousand networks."

Allied Fiber recently completed its Miami to Jacksonville fiber route, which is lined with six modular colo sites. The company plans to to complete a network buildout to Atlanta by June, adding five more colo sites along the route.

The southeastern route is part of a larger network construction project laying fiber along rights-of-way for the Norfolk Southern railroad. A Northeast route will run from Chicago to New York to northern Virginia, with at least 20 Allied Fiber colocation facilities lining the route.

Each colo site features a 1,200 square foot facility comprised of three modular components that are assembled on-site. The units are built by CellXion, a unit of Sabre Industries with experience in the mobile infrastructure market. They allow companies to easily add capacity for mobile traffic, edge caching and content delivery and cloud computing connectivity.

"These are basically cell tower huts that we've made bigger," said Newby. "It's a battle-hardened MMR in a box."

The colo modules are designed to be multi-tenant, with generator support, a fence with perimeter security, mantrap and monitoring via remote NOC. The locked cabinets are filled with network gear rather than servers, with average power density of about 4kW a rack, somewhat less than the 6kW to 8kW you might see in a data center.

"It's designed to be a core transport facility," said Newby. "We can add capacity by building adjacent data centers from containers or modular units. We can work with any of the modular vendors on this."

Newby likes the economics of the modular approach. "This way, I don't need to make a big bet on capacity in Rockledge, Florida," he sayd. "When we get to 75 percent capacity, we buy another unit and bring it in on a crane. I can scale to 3,600 feet on the same property."

The Florida project provides an opportunity for Allied Fiber to prove its model, and build momentum for expansion. Newby believes that the ability to connect cell towers and edge networks directly to long haul fiber will prove to be a compelling model, offering cost savings and ultimately greater choice in network providers.

Newby points to his experience with Telx, which built a major operation connecting networks inside 60 Hudson Street, a major Manhattan telecom hub, that soon become the nexus of a national network of sites. Newby believes providing neutral access to dark fiber and colo sites will prove appealing well outside the major data center markets.

"People would say 'why do you think you can do this?' It's like Telx," said Newby. "I learned a lot about the process of how to get to critical mass.

"There are a lot of skeptics and naysayers, because this is bold," he said. "There are also a lot of people rooting for us."

Here's a look at Allied Fiber's network model and how Newby envisions different industry players connecting to it:

A diagram of the Allied Fiber approach to connect its dark fiber route to various properties, including modular data centers.