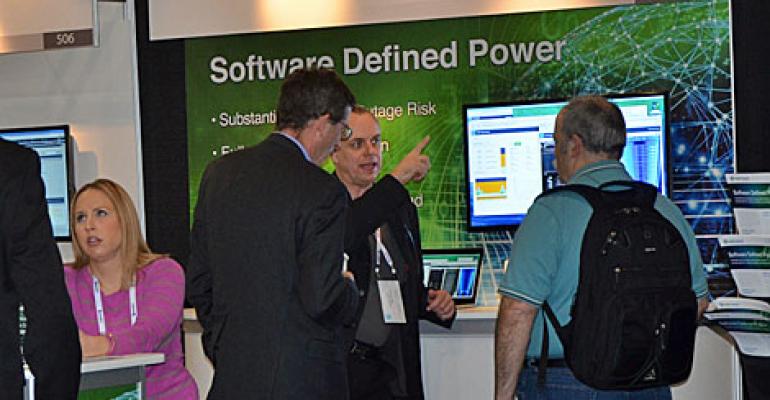 Power Assure&#8217;s former CTO Clemens Pfeiffer (second from the right) speaks with attendees at the company booth at a 2013 industry event. (Photo by Colleen Miller)
Design

The company failed to raise enough money to continue operating, he said, adding that he did not have any further details about what had led to the dissolution.

The DCIM software market is still fairly young but has already gone through a wave of consolidation. A handful of Power Assure competitors have been acquired by larger companies, which have been fleshing out their DCIM offerings to provide comprehensive infrastructure monitoring and management software suites.

Power Assure has been focused on one element of the infrastructure: energy management. Its technology early on was based on algorithms that enabled it to calculate optimal server capacity an application needs and automatically shut off unnecessary capacity or spin up more capacity based on actual application demand.

Recently, it has been pushing the concept of “software-defined power,” the idea of dynamically shifting applications from one data center to another based on power availability and quality in a particular geography at a particular point in time. “It requires creating a layer of abstraction that isolates the application from local power dependencies and maximizes application uptime by leveraging existing failover, virtualization and load-balancing capabilities to shift application capacity across data centers in ways that always utilize the power with the highest availability, dependability and quality,” Pfeiffer described the concept in an article he wrote for Data Center Knowledge earlier this year.

Ahead of its time?

She speculated that perhaps timing was to blame for its inability to sustain itself. “I feel like they had a superb idea, but I don’t think the market is ready yet.”

What the company was proposing would require an entirely new mind set about data center management and a new set of processes.

The DCIM market, she said, is still “in the ad hoc opportunistic phase,” where a lot of new ideas are born but not yet tested against market realities. There’s “flood of great ideas, and then there’s what actually succeeds in the market,” Koppy said.

Power Assure has enjoyed support from partners, investors and the government but appears to not have been able to sustain that support.

It followed a $2.5 million Series A round in 2009 with an $11.25 million round the following year and a $14.5 million Series B in 2011. In 2010, the U.S. Department of Energy awarded the company a $5 million grant as part of the American Reinvestment and Recovery Act of 2009, also known as President Barack Obama’s “stimulus package.”

DCIM is one of the fastest-growing segments of the enterprise software market, according to 451 Research. The market research firm tracks about 60 vendors in the space.

While there is a healthy growth rate, 451 revised its 2013 growth projections downward this year. In 2013, the analysts expected market size to reach $1.8 billion by 2016, but changed the forecast, saying it would reach that size two years later.

The size of portions of total revenue the market generates is greatly skewed toward a dozen or so large companies. Only a handful of players manage to generate more than $26 million in annual DCIM sales, according to 451.

The vast majority of DCIM vendors are companies like Power Assure, smaller players, many of whom make less than $4 million a year in sales.

Some of the smaller players have been acquired by their larger competitors in deals such as CommScope’s iTRACS acquisition in 2013 and Panduit’s acquisition of SynapSense earlier this year. Companies with different portions of DCIM functionality have also partnered as everybody races to have the most comprehensive package out there.

Consolidation is a sign that the market is starting to mature, IDC’s Koppy said. “We will most definitely see more. More partnerships and more buyouts.”