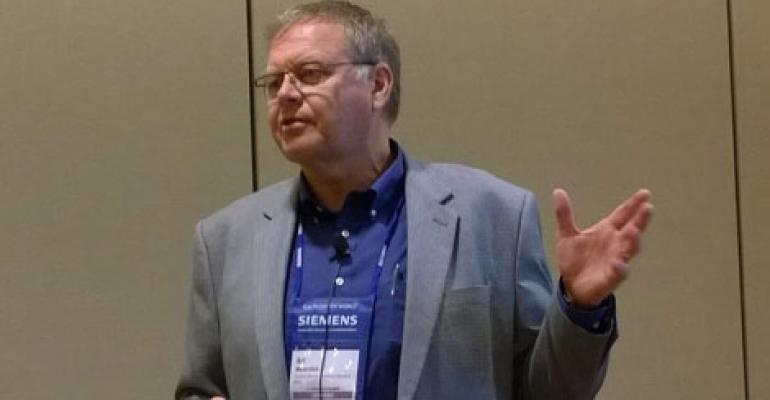 Data Center World: How does the hype translate into real-world challenges inside the data center

ORLANDO, Fla. - About 80 percent of the software being written today is coded to be cloud-ready and run on virtualized infrastructure. That's according to Bina Hallman, vice president of storage systems management at IBM, who said the data is evidence of the looming transition to a software-defined infrastructure in modern data centers.

This shift was the focus of a Monday panel session at the Data Center World conference in Orlando, where specialists in storage, networking and data center environments discussed how the hype around "software-defined everything" translates into real-world change inside data centers.

"Software-defined data centers are a spectacular opportunity," said Art Meierdirk, senior director of business services for INOC, which offers outsourcing services for network operations. "We're moving toward a point where users can manage their businesses in ways that we wouldn't have dreamed of 20 years ago."

Software-defined technologies are driven by virtualization, an abstraction layer which uses hypervisors and virtual machines to organize and manage workloads in new ways. Provisioning virtual resources with software makes it easier to scale applications and use hardware efficiently. Software-defined networking holds the promise of reducing costs by shifting network management task to commodity servers rather than expensive switches.

It's a new world, with major implications for infrastructure. Virtual machines make it easier to move workloads from one location to another, a capability that unlocks a world of possibilities. Companies can save money by shifting VMs between racks and even across data centers, seeking the cheapest and most efficient environment for a given workload or time of day.

"SDN will change the way we think about data centers," said Aaron Rallo, CEO of TSO Logic, which makes capacity management software. "As my workloads start moving around, how do you keep track of them? There's a lot of upside, but you need new tools and analytics."

As workloads move, the power and heat travel along with them, raising challenges for power distribution and cooling. As Rallo noted, this places a premium on communication between the IT team and the facilities staff, two groups that don't always work in tandem within the data center.

A transition for the data center

Software-defined technologies can be implemented in compute, storage, and network. Some may be skeptical about the many buzzwords and futuristic visions, seeing software-defined as the IT equivalent of flying cars. But as these technologies develop and mature, panelists said, they will see increasing traction and companies will need to develop a roadmap for adoption.

"How do you get an infrastructure in place that can run the traditional business, but take advantage of these opportunities in social, mobile and analytics?" Hallman asked. "We believe that open standards are the key to accelerating innovation." The OpenStack cloud platform is one example of an open technology that can serve this function, she noted.

In software-defined networking, the adoption process starts with small-scale implementations, according to Marco Alves, an engineer at SDN Essentials, which offers training services for network professionals.

"A lot of businesses are already testing SDN technologies," said Alves. "Nobody is talking about whether to implement an SDN solution. The discussion is really about what type of solution. To solve these issues, migration strategies are fundamental."

As companies refine their proof-of-concept installations, they will begin to deploy software-defined solutions in gradual steps.
"When the change comes, it will be a phased process," said Alves. "I don't think anyone will do a forklift upgrade and replace their infrastructure."

Rallo agreed. "There's a lot of steps and levels between where data centers are, and where they're going," he said.