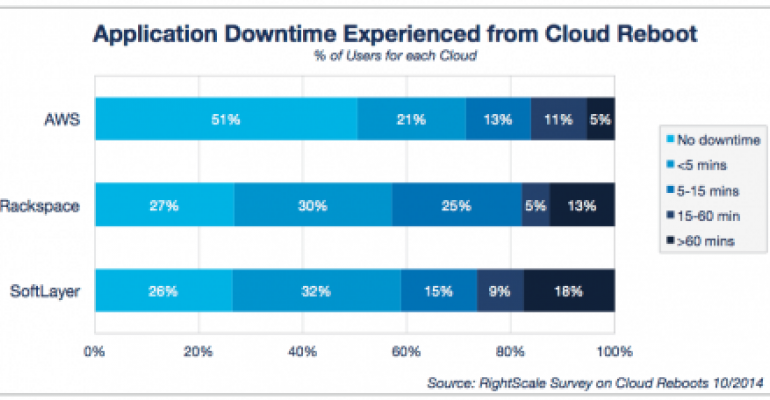 RightScale breaks down the reboot's effects on its users

Cloud infrastructure management company RightScale has released a report on downtime its customers experienced as a result of the great Xen cloud reboot of 2014. Multiple cloud providers rebooted significant portions of their infrastructure in late September to apply a patch for a known security vulnerability that affected certain versions of the open source XenServer hypervisor.

From the relatively small sample size (about 450 RightScale users were affected by the reboot total), AWS was affected the least, 5 percent of its customers dealing with 60 minutes or more of downtime. Half (51 percent) of AWS users reported no downtime, and the other half most likely experienced a traditional reboot and a little bit of downtime usually associated with it.

About 350 users in the sample are on AWS.

“The lower downtime for the AWS reboot could be partially explained by the fact that, unlike the Rackspace and SoftLayer reboots, it did not affect all instances,” wrote Kim Weins, vice president of marketing at RightScale.

AWS had a smaller percentage of affected virtual servers contributing to the skew. RightScale also attributed AWS’ success during the reboots to having a better strategy than the others.

RightScale also included 74 customers with on-premise Xen deployments in the report. A large majority (81 percent) said they weathered the reboots well, though 41 percent said the patching involved a significant amount of work.

The reboot had a somewhat negative effect on the perception of cloud, 10 percent of RightScale users saying they were less likely to continue using AWS, 20 percent Rackspace and 29 percent SoftLayer. There’s a clear correlation of these figures with those that show how many users experienced more than 60 minutes of downtime. In an age where any downtime can negatively impact a business, damage from more than an hour of downtime can be disastrous.

Perhaps the best news in the report was that 37 percent said they planned to create better cloud and IT best practices to handle this sort of thing in the future.