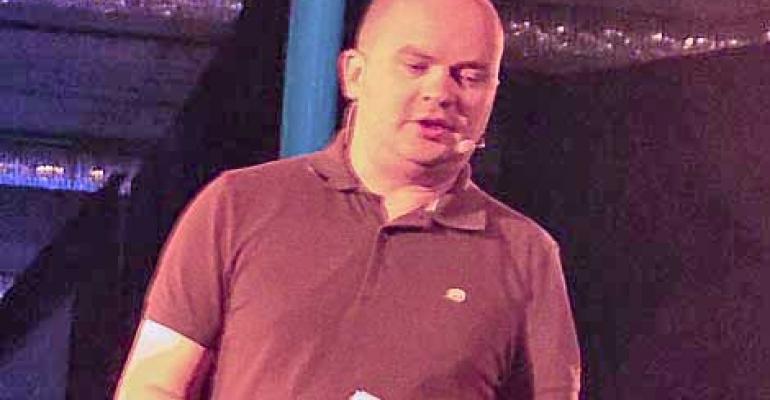 NEW YORK - The U.S. government's IT infrastructure is broken, and it's hurting the country. Applying basic engineering skills that are common at Internet companies could change that situation. But how do you convince technologists to adopt this difficult calling?

If you're Mikey Dickerson, you share a compelling story of how engineering saved the day on something that matters. Dickerson, the executive credited with getting the Healthcare.gov website back on its feet, brought his message to the world's leading gathering of web performance specialists.

At the O'Reilly Velocity New York conference, Dickerson challenged the audience to get involed in fixing the U.S. government's IT infrastructure.

"These are all big problems that need the attention of people like you. These problems are important, and fixable, but you have to choose to take them on. This is real life. This is your country."

Engineering nightmares, but fixable ones?

Dickerson's experience in resuscitating the healthcare site reflects both sides of the government IT experience - the project-killing bureaucracy and incompetence, along with the potential to make a huge difference on technology that can affect people's benefits and lives.

Until last Oct. 22, Dickerson was an engineering manager at Google. That's when he became the head of the "tech surge" of Silicon Valley specialists tasked with rescuing the Healthcare.gov web site, which at that point had been largely offline since it crashed upon its launch three weeks earlier.

What he found when he arrived at the Healthcare.gov offices in Herndon, Virginia, was shocking - especially so for the audience at Velocity, which is focused on web automation.

"There was literally no dashboard," said Dickerson. "There was no place to find out whether the site was up or down, except for watching CNN. Obviously, you're dead in the water if you can't see what's going on with the site."

Fifty-five contractors were involved in the Healthcare.gov site, but none were tasked with keeping the site online so people could use it, he said.

"Amazingly, there was no sense of urgency, because this was just like any other government project," said Dickerson. "Government IT contracts fail all the time. There was almost no place where we could point to a decision and say we'd made the right one."

Dickerson had no idea how long it would take to get the site operational. Political realities forced the creation of a deadline, so the Obama administration announced that the site would be up and running by Dec. 1.

The good news, Dickerson said, was that the site was so busted that implementing basic best practices could make a huge difference. "We created monitoring, and set up a war room," said Dickerson. "We made it like Mission Control, with 100 people from all these contractors meeting twice a day, and I'd ask 'what's wrong today?' And we'd identify who could fix it."

By Dec. 1, the site worked well enough that the media - the key arbiter in the effort to meet the deadline - decided that the team had met its task. By the April 1 deadline for enrollment in plans through the Affordable Care Act, more than 8.1 million people had registered, well beyond the initial goal of 7 million.

"We didn't expect to fix this," said Dickerson. "We just gave it our best shot, because somebody had to. Most of this was labor-intensive, but not very hard."

After months of 17-hour days, seven days a week, Dickerson returned home. That's when the gravity of his experience sunk in.

"I went back to my regular job, and tried real hard to care," he said. "I realized that the impact [the healthcare.gov repairs had] on the country was totally disproportional to anything else I would ever do at my job."

So he went back to Washington and became administrator of the U.S. Digital Service, an effort to create a full-time team to take the techniques that worked with Healthcare.gov and apply them more broadly.

Dickerson encouraged engineers to consider the U.S. Digital Service or the 18F unit of the General Services Administration, which is focused on transforming federal IT. There are also opportunities for government contractors, who are trying to get their arms around the changes in web operations, as well as some promising startups.

The call to service reflects O'Reilly's interest in the potential for technology to transform government. Founder and CEO Tim O'Reilly is a board member of Code for America, which builds open source technology for government use.