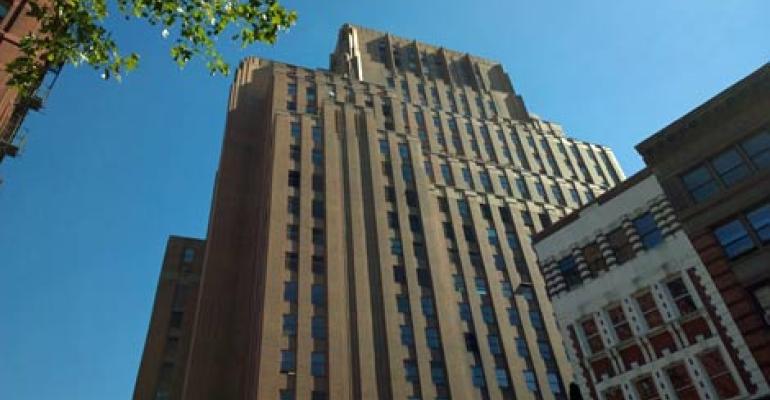 One of New York's premier data center addresses is getting a power-up. DataGryd is upgrading the power infrastructure at 60 Hudson Street, adding generators and additional capacity from ConEd.

NEW YORK - For a window into the ambitions of DataGryd, look to the rooftop of 60 Hudson Street. High atop the iconic Manhattan communications hub, more than 370 feet above the the streets of Manhattan, a hatch in the roof is unlocking the building's future.

That's the entry point for the diesel generators that are expanding the power capacity at 60 Hudson. The generators must be installed by a crane, which lowers the 62,000-pound units into their new home on the 24th floor reinforced with additional steel girders. Two of the massive engines are in place, with four more to come.

The skyhatch and engine room are powering the expansion of data center space inside 60 Hudson, an art-deco landmark which has been a cornerstone in the development of America’s communications infrastructure. Built in 1929 as the headquarters for Western Union, the building powered the growth of the nation's telegraph system and then evolved into a key telecom hub for AT&T and others. With the dawn of the Internet age, 60 Hudson became a key meeting place for networks, with fiber optic cable filling conduits that once delivered telegrams in pneumatic tubes.

But servers, switches and storage units are hungry for power, and 60 Hudson Street needed more of it. Enter DataGryd, a new data center company formed in 2012. The company's founder, Peter Feldman, saw an opportunity to transform four floors at 60 Hudson into high-density space for service providers. To make it work, Feldman had to devise a way to expand the power and cooling capacity for the 80-year-old historic landmark building, located in a noise-sensitive neighborhood. It had to do all this without disturbing the current tenants, many of whom run mission-critical data operations

"We had to modernize and future-proof the building," said Feldman. "We had to turn the building inside out to do it. But now we can meet future market demand."

The first phase of that plan comes to fruition this week, as colocation specialist Telx brings a new data center online on a full floor it has leased from DataGryd.

Expanding a building's power capacity in an urban setting is a major challenge. The upgrades at 60 Hudson offered additional layers of complexity.

"This building is a landmark, and anything we wanted to do had to be approved," Feldman said last week as he showed off the renovations. "People don’t like diesel generators or exhaust or noise. I’ve got to be sensitive to the impact on the neighbors. We worked with the landmarks commission and the city and the mayor on meeting our civic obligations."

The plan featured several facets: adding more grid capacity from Con Edison, an on-site cogeneration facility, and additional generators to provide backup electricity. Tying these together is a utility-scale microgrid that can tap any generation source - the grid, the cogen plant or the generators. This would allow DataGryd to create an additional 240,000 square feet of high-density space within 60 Hudson.

Feldman knows the building well from his days as a co-founder of Telx, one of the largest tenants. He worked closely with the building's owners and the management firm, Colliers International, to develop the renovation plan.

As with many renovations, there were surprises that led to adjustments, most notably Superstorm Sandy. Initially Feldman hoped to install the generators in the sub-basements, which previously housed fuel tanks. The building's tiered "birthday cake" design leaves limited space for generators on upper levels, a practice which has prompted complaints from residents in the TriBeCa neighborhood.

Then the storm surge from Sandy flooded the basements of several data center buildings in the Financial District, crippling generator operations and knocking tenants offline. Although 60 Hudson remained high and dry during Sandy and is not in a flood zone, data center shoppers became wary of mission-critical infrastructure in basements.

The generators were shifted to the 24th floor, which will now be shared between the generators and a scaled-down cogeneration plant. Each 3 megawatt generator had to lowered through the roof in pieces, and then reassembled. The generators will add 15 megawatts of additional backup capacity, with one spares for an N+1 configuration. Each Detroit Diesel engine is equipped with an oversized muffler to reduce noise, and the exhaust vents to the roof to the fumes will not go into the surrounding neighborhood. 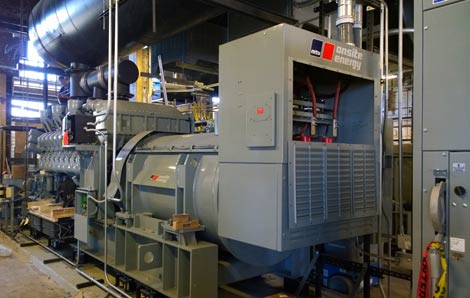 A look at one of the 3 megawatt generators installed on the 24th floor of 60 Hudson Street in Manhattan. The generators provide emergency backup power for new data center space being built by DataGryd. (Photo: Rich Miller)

Extra power capacity will be provided by the turbine for the cogeneration facility, which will be installed once DataGryd's tenants reach about 3 megawatts of power usage. The turbine will generate 4.5 megawatts of medium-voltage (13,200V) power, as well as 900 degree exhaust that can be captured for use in the cooling system (via an absorption chiller providing 1,500 tons of chilled water capacity) and also assist in heating the building. The turbines were the only cogeneration solution that provided the necessary capacity and performance, and could run quietly enough to not disturb the building’s neighbors.

To support the cooling system, modular cooling towers have been added on the roof, which will each support 8,500 tons of condenser water. Feldman's team has also tapped unused risers on each side of the building to run conduit and cabling for the power and cooling systems.

Those risers will connect the data halls and generation plant with a power room on third floor. A key element of Feldman's plan is the creation of a microgrid that can manage power throughout the building, providing medium-voltage electricity that involves less cabling and less power loss during distribution. The microgrid can tap multiple power sources, and provides tenants with flexibiloity about how their power is delivered within the building.

The power infrastructure upgrades required significant expense, but were crucial in lining up an additional 12 megawatts of power capacity from Con Edison, boosting the total capacity at 60 Hudson from 38 megawatts to 50 megawatts.

A Con Edison substation is just 400 feet from the building, making it easy to connect new feeds. The microgrid and access also make it easier for 60 Hudson to export power back to the grid - which is what Feldman plans to do during monthly testing for the 3 megawatt generators. Rather than using a load bank to test the units, DataGryd will ship the power to Con Edison.

Selling the power back to the grid doesn't have a major impact on the economics of the infrastructure upgrades. But Feldman said that when it comes to building good relations with the local power company, every little bit helps.

"On a hot summer day, I can take load off the grid or add to it," said Feldman. "I’ll have enough power to power the neighborhood."

DataGryd will show off the improvements in an industry event Thursday. While there are all kinds of changes happening on the back end, the allure of 60 Hudson Street remains in both the virtual and physical realms. Behind the walls, the building pulses with more fiber and power than ever. Yet the building retains the design flourishes that distinguish it as a piece of New York's heritage, as richly illustrated in the building's ornate lobby. 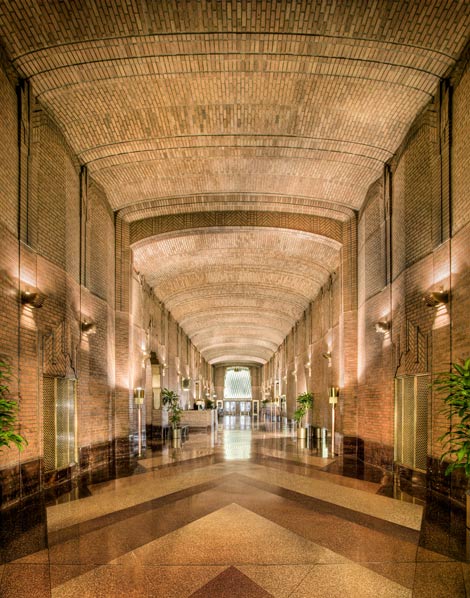