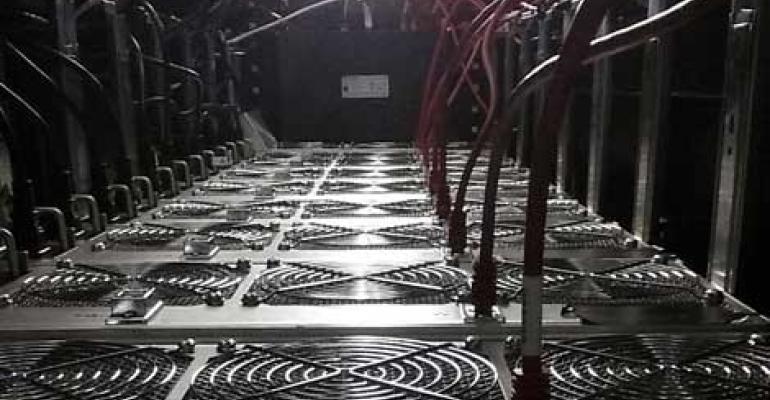 A look inside a rack of Bitcoin mining equipment from Rocky Mountain Miners. (Image: RMM)
Business

An example of this trend is Rocky Mountain Miners, a new company specializing in Bitcoin hosting, which is leasing space with IT infrastructure provider Latisys. Under a multi-year agreement, Rocky Mountain Miners will colocate a portion of its high-density Bitcoin mining operations in the Latisys DEN2 data center in Centennial, Colorado.

Rocky Mountain Miners (RMM) provides tailored solutions and consulting for customers doing large-scale cryptocurrency mining. As the Bitcoin sector attracts new players, providers like RMM can streamline their market entry by installing and configuring mining hardware, which can be a tricky task. There's been an arms race in Bitcoin mining hardware over the past year, with a flurry of new entrants offering more powerful mining rigs.

"There have been a lot of changes in this business," said John Logan Jones, the CEO of Rocky Mountain Miners. "We've learned a lot about this equipment and how to get the most out of the hardware."

When he looked for hosting infrastructure, Jones considered many options. "We were looking at opening our own space," he said. "We concluded that for the amount of money we needed to invest, it made more sense to go with Latisys. Their cutting edge, reliable infrastructure enables us to focus on the installation, monitoring and maintenance of our customers' hardware, ensuring maximum hashrates, uptime and profits."

RMM started out building custom mining hardware for Litecoin, one of the many "AltCoin" cryptocurrencies adapted from the original Bitcoin code. "It was a hobby that turned into a business," said Jones, a former Air Force cryptographer. "We started out building systems for individuals, but are now focused on large-scale mining. Now we're a service provider to the mining industry and one of the first mining services companies."

From its inception, Rocky Mountain Miners has focused on making mining equipment easy to use. Bitcoin and other major cryptocurrencies are mined by custom hardware, often powered by Application Specific Integrated Circuits (ASICs). Many early ASICs were manufactured in China, with other leading vendors based in Sweden, Ukraine and Israel, as well as the U.S. Configuring drivers and software can be difficult, as popular management software (including cgminer, BFGMiner and cpuminer) has been forked to create versions that support new hardware, often with limited GUI support.

Although mining hardware can be managed using Windows computers, most large-scale operators use low-power controllers like the Raspberry Pi. With limited documentation for hardware and software, trouble-shooting often takes place on industry forums like BitcoinTalk or Reddit.

That's why Jones sees an opportunity in managed hosting and consulting for miners. This approach requires a platform, which is where Latisys comes in. A key requirement in a Bitcoin mining data center is high density, as racks of mining rigs can run at 20 kilowatts and higher. The 87,000-square-foot DEN2 facility, built in 2012, was designed to support higher loads.

"The hosted Bitcoin solution is a great example of why ultra-high-density infrastructure is the key consideration for optimizing a variety of hosting and hybrid IT infrastructure solutions - particularly those that require massive parallel processing and scale," said Pete Stevenson, CEO of Latisys.

RMM has already developed liquid-cooled rigs and sees that as part of its future roadmap. "As we grow our operation, chances are we'll have to go to glycol cooling," said Jones.

In recent months Bitcoin mining has become a game for large players with lots of financial strength, making it nearly impossible for solo miners to compete. Jones is convinced that the cryptocurrency world has plenty of room for innovation and says smaller players can continue to find niches. That's especially true, he said, in the world of AltCoins, where new entries are building distributed storage and other services atop the core blockchain technology that powers cryptocurrencies.

"Bitcoin hashing is very important, but there will be different kind of services that require different infrastructures," he said. 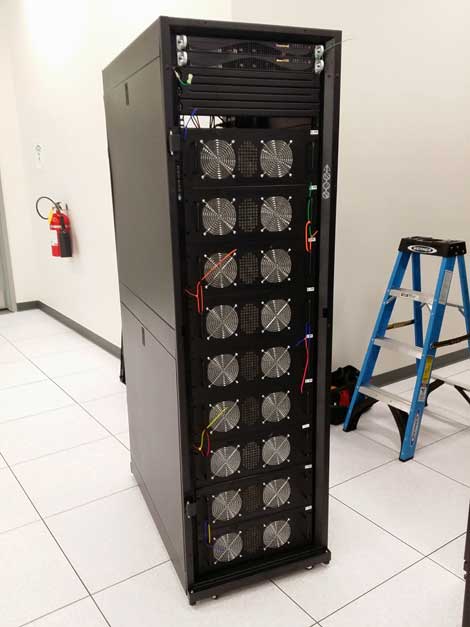 This rack of Bitcoin mining equipment will run at 20 kW in a Latisys data center. (Image: Rocky Mountain Miners)