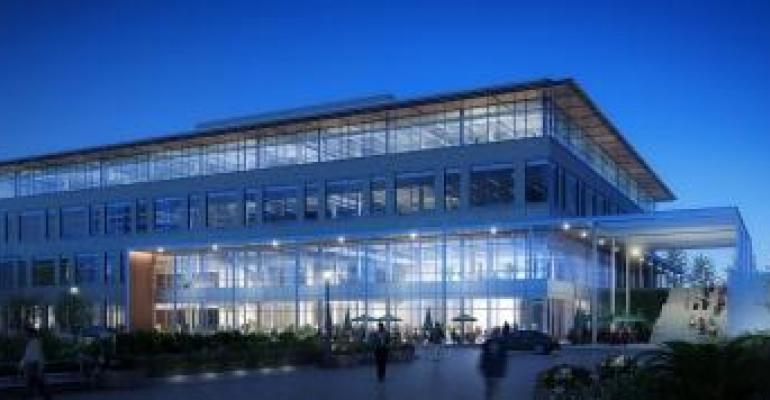 The Highland Mall in Austin, Texas, is being repurposed as a Rackspace office building. (Rendering: Gensler)
Companies>Rackspace

Making a habit out of using defunct malls as office buildings, Rackspace has agreed to lease a building in Austin, Texas, that used to house the Highland Mall.

The building will give Rackspace additional office real estate in the vibrant and quickly growing city, where it already has an office building. There is a thriving tech startup scene in Austin with no shortage of venture capital.

The building belongs to Austin Community College, which bought it in 2010. The idea to renovate the four-story 194,000 square foot building and lease it to Rackspace came from Live Oak-Gottesman, a developer who suggested it in a request for proposals to ACC.

Live Oak-Gottesman will renovate the building and get paid by a portion of Rackspace’s lease payment, according to an ACC news release.

Once the data center services company’s offices at Highland open – which ACC expects to happen in late 2015 – it will offer paid internships and tech training for ACC students. Rackspace is reportedly planning to relocate 570 employees to the new campus.

Richard Rhodes, ACC president and CEO, said, “Rackspace is one of the area’s top employers and has a strong commitment to education."

This will not be the first time the company will have moved into a former shopping mall. Its current headquarters building in San Antonio, Texas, is the former Windsor Park Mall.

There are scores of massive defunct properties all over the U.S. that used to house shopping malls. The list grew with proliferation of online shopping as well as fallout from the 2008 recession.

Some of the properties have been repurposed, such as the two buildings in Texas. While Rackspace is a data center company that occupies former shopping malls as office buildings, there are also companies that convert these properties into data centers.

One example is Ubiquity Critical Environments, a company established by Sears Holdings, a long-time brick-and-mortar retailer that now owns a lot of the shuttered retail real estate. Ubiquity is tasked with repurposing former Sears Auto Centers for data center use.

Another example is a company called AiNET, which has turned a former department store within a mall in Maryland into a data center but expressed interest in buying the entire property in 2013, whose owners were facing foreclosure after defaulting on a loan.