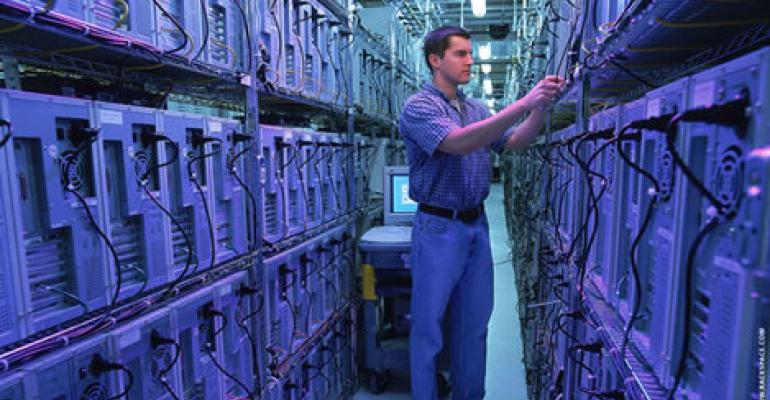 Rackspace has been leader in Gartner’s North American “Magic Quadrant” for the category for the past two years. This is the first time the market research firm has published a European Magic Quadrant for cloud-enabled managed hosting, determining that Rackspace beats all competitors in Europe as well, including European companies Interoute, Colt, BT Global Services and Claranet, as well as its U.S.-based competitors playing in the European markets, such as Verizon and CenturyLink, among others.

More competition than in North America

All the companies mentioned above are in the top-right section of the quadrant, designated for leaders in the managed cloud hosting category, Rackspace ahead of others in terms of both vision and ability to execute. London-based service providers Colt Technology Services and Interoute are both close to Rackspace on both axes.

The Texas company's competitive landscape is very different in North America, where, according to Gartner, the only other leader in the cloud-enabled managed hosting category is Jersey City, New Jersey-based Datapipe.

To the left of the “Leaders” section of the European quadrant is the “Challengers” section, which includes Attenda, IBM and AT&T.

Leading niche players in the market, according to Gartner, are NTT, Fujitsu, Telefonica, Vodafone, Sungard, Easynet and SFR (formerly Société Française du Radiotéléphone). The analyst firm has not identified any companies that would fit into the “Visionaries” section of the quadrant.

While identifying Rackspace as a leader in Europe, Gartner cautioned that the company does not have any data center presence outside of the UK, which is something to consider for non-UK customers with “data residency requirements or latency concerns in European regions farther away from the UK.”

Another caution was Rackspace’s lack of an integrated self-service firewall capability. This means customers have to deploy host-based firewalls or dedicated managed firewall appliances.

The third potential drawback is Rackspace’s global portal strategy, which the company is still rationalizing. Customers using Rackspace to deploy applications globally may at some point end up with different interfaces and logins. 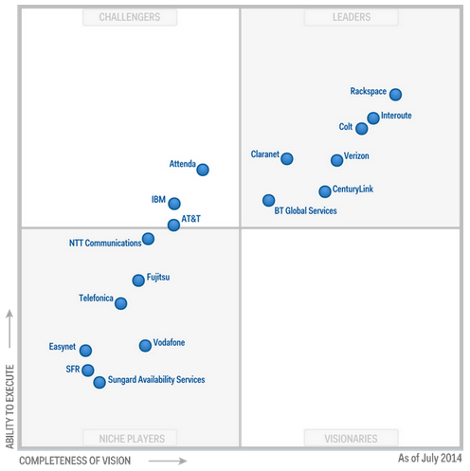 Rackspace claims to have been the first company to do managed hosting. “Fifteen years ago, when scores of companies rented out access to single-tenant servers with little or no support, we at Rackspace created the managed hosting business,” John Engates, the company’s CTO, wrote in a blog post published Wednesday.

This claim is hard to confirm, and Gartner analyst Lydia Leong took issue with it in a Twitter comment. She said there were many companies providing managed hosting since at least 1995, including Exodus, Digex, UUNET, IBM and AT&T, among others.

Early on, the provider strengthened its expertise in Linux and Windows system administration, as well as network security, with the goal of relieving customers of the burden of managing complex systems.

It is now applying the same ethos to cloud services, of which there is a myriad of kinds, and where complex interrelations and infrastructure sprawl are a constant. The non-entry-level tier of its new managed cloud services offers customers the option to essentially outsource end-to-end operations of their entire stack deployed in the Rackspace cloud.

Correction: A previous version of this article erroneously said that Datapipe was based in San Jose, California. The service provider is actually headquartered in Jersey City, New Jersey. Data Center Knowledge regrets the mistake.