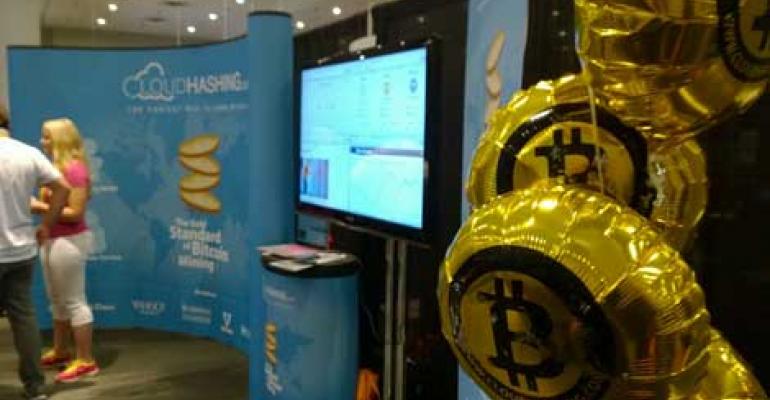 CloudHashing, a unit of PeerNova, is one of the Bitcoin mining operations expanding its operations in data centers. (Photo: Rich Miller)
Business

Bitcoin Infrastructure May Grow by $600M in Second Half of 2014

Bitcoin mining operations are expected to spend at least $600 million to deploy infrastructure in the second half of 2014 to process transactions using the fast-growing cryptocurrency.

Bitcoin mining operations are expected to spend at least $600 million to deploy infrastructure in the second half of 2014 to process transactions using the fast-growing cryptocurrency.

That investment will continue into 2015, according to a panel featuring some of the largest players in Bitcoin mining at Friday's CoinSummit conference in London. A significant portion of that spending will benefit data center providers with clients in the cryptocurrency game.

Projections of future spending are often optimistic. But these experts say their projections are, like much of the Bitcoin world, based on the math.

"It comes down to the financial incentives," said Dave Carlson, founder of MegaBigPower, a large Bitcoin operation in Washington state. "Over the next two years there will be 2.6 million Bitcoin mined."

At current price of about $630, that adds up to at least $1.6 billion in Bitcoin that will be earned by mining operations through "block rewards," an incentive paid out every 10 minutes for using their computers to process transactions on the Bitcoin network. If the price moves higher, as is anticipated by many Bitcoin miners, that opportunity will be even greater.

"How much does it take to capture a share of that $2 billion?" Carlson asked. "You could invest $100 million and do very well. That's how I've been thinking."

The growing interest in Bitcoin and other virtual currencies has spurred a massive investments in servers and infrastructure to process transactions. Computing power in virtual currency is measured by the "hash rate," the number of Bitcoin calculations that hardware can perform every second. Since January, the Bitcoin network has grown from a total compute power of 10 petahashes per second to 135 petahashes per second.

The mining panelists at CoinSummit expect that growth to continue through the fall, resulting in a year-end hash rate of between 400 petahashes and 700 petahashes per second. The cost of deploying a petahash ranges from $1.5 million to $2 million, depending on where the capacity is deployed. Operators like Carlson that deploy in warehouse-based hashing centers are at the lower end of that range, while providers like PeerNova, which use wholesale data center space, are at the higher end.

That suggests a range of $600 million to $1.4 billion in new investment by the end of 2014. The industry's largest players are already expanding their infrastructure.

"You'll see some announcements from us shortly on data centers we're opening,' said Marc Aafjes, chief strategy officer at BitFury, an ASIC manufacturer that recently raised $20 million from venture capital firms. "I think that will be a differentiator in the near future."

BitFury illustrates a trend in which hardware vendors that make custom ASICs (Application Specific Integrated Circuits) for Bitcoin are shifting their focus to mining. While they continue to sell mining rigs to customers, these companies are also using them to populate large industrial mines. BitFury operates large hashing centers in Iceland, Finland and the republic of Georgia.

"I think the economies of scale favor data center installations," said Timo Hanke, the CTO at Cointerra, an ASIC manufacturer that has also begun developing data centers to host cloud mining services, including one in Utah that was featured in the Wall Street Journal.

PeerNova was formed by the merger of ASIC vendor HighBitCoin and cloud mining pioneer CloudHashing, creating a vertically-integrated company that can handle the entire supply chain, from design of the chip to deployment in the data center.

"When we are building our machines, we build at the data center level," said Naveed Sherwani, the CEO of PeerNova, which leases wholesale data center space in Iceland and Dallas. "Machines can be tuned to their location within the data center aisle. We need to figure out how to run 150,000 to 200,000 machines."

PeerNova's current mining ASIC, the PetaOne Blade, features a 28nm ASIC chip. Sherwani says that PeerNova's roadmap calls for future chips with 16nm and 9nm semiconductors, putting it in the same neighborhood as Intel's current roadmap. "I think in the next two years we are going to see a dramatic improvement in ASICs in power and CapEx," he said.

Building franchise networks to scale up

As the mining action scales up and larger players emerge, it becomes challenging for smaller operations to compete. Carlson has recently launched a franchise program to help MegaBigPower stay competitive.

"If we're going to scale along with the network and maintain our market share, we're going to have to (grow) quicker," said Carlson. "Our way of doing that it to decentralize. We're seeing an opportunity for the small business startup mine that has the ability to make the economics work."

MegaBigPower will provide Bitcoin mining hardware for franchisees who can supply industrial facilities with 1 megawatt to 5 megawatts of power. A similar program has just been announced by ZeusMiner, which makes ASIC hardware focused on AltCoin mining using the Scrypt protocol (Bitcoin mining uses the SHA-256 protocol).

“We want to find global partners who can provide a site to host hundreds of miners with cheap power supply to deliver more cost-efficient hashing rates,” ZeusMiner said.