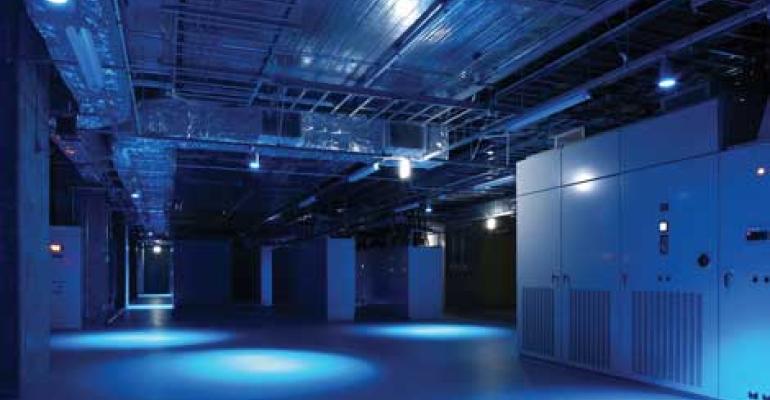 The interesting things revealed in the SEC filing you don't have time to look for.

There is always a few interesting data center tidbits in docs high-profile firms hand to the SEC before they go public. Digging through the docs to find them, however, is not necessarily something a data center manager or an IT ops person has the time to do, so we do it for you. The biggest upcoming IPO in the high-tech world everybody is talking about is by Box, so here they are: the five things in the cloud storage and collaboration firm's recent SEC filing data center pros would find most interesting (well... at least the five things we found most interesting):

1. Data center capacity planning is a real headache for Box. Right-sizing the infrastructure so that you don't spend too much but can still handle a growth spurt is an age-old problem in the data center world, and Box is not an exception.

It just so happens that CEO Aaron Levie and CTO Dylan Smith chose a business that is so capital-intensive that it's extremely difficult to have a healthy profit margin (as we mentioned in last week's coverage of Box's recent $150 million funding round). Much of that capital goes to hardware and the data center resources to house it, and any miscalculation in capacity planning will have a sizable impact on operating results.

In the company's own words: "If we overestimate the demand for our cloud-based storage service and therefore secure excess data center capacity, our operating margins could be reduced. If we underestimate our data center capacity requirements, we may not be able to service the expanding needs of new and existing customers and may be required to limit new customer acquisition, which would impair our revenue growth."

The problem here is that right now just a few customers use Box to organize all of their files. Cloud storage and collaboration tools, however, are a relatively new way of doing things for enterprises, and it is very possible that more of them will look to Box for a complete content storage solution. While it would be welcome news for a company like Box, inability of its infrastructure to absorb the growth would be disastrous for the business.

There are two primary Box data centers in northern California and a disaster recovery site in Las Vegas (3.6 megawatts total across the three sites). The company has not made a secret of the fact that its primary data center provider is Equinix (copy of a contract with the provider included in the package of documents submitted to the SEC is further proof).

Another data center provider contract on the list is with Switch Communications -- operator of massive data centers in Las Vegas that is more likely than not the provider that hosts Box's disaster recovery site.

3. Box has been able to beat its uptime SLA. At the disaster recovery site in Las Vegas, the company uses a third-party storage backup solution. But that is only one part of the meticulously engineered infrastructure that delivers more uptime than the company promises to clients.  Box's uptime SLA is 99.90 percent, and its average monthly uptime for the 12 months ending with January of this year was 99.93 percent.

The design uses a redundant network infrastructure and server clusters designed in a way that ensures a cluster stays up even if individual nodes fail. The servers are deployed in high-availability pairs, and the entire environment is replicated at the disaster recovery site. "Customer files are backed up to another location that would be out of any disaster zone due to proximity," the company's reps write in the SEC documents.

To prevent hacker penetration, Box uses Secure Socket Layer (SSL) encryption for data in transit and 256 bit Advanced Encryption Standard (AES) for files at rest. It provides customer IT admins with detailed logs of uploads, downloads, preview and deletion of their content with all the associated metadata.

4. Third-party-verified performance lead over competition. In addition to the three primary data centers, Box has a number of edge locations elsewhere around the U.S. and around the world hosted by Equinix. In 2012, it announced an expanded relationship with the provider, adding locations in Chicago, Ashburn, Amsterdam, Sydney, Hong Kong and Tokyo. These locations made up what the company calls the Box Accelerator, providing faster service to customers in the surrounding regions. 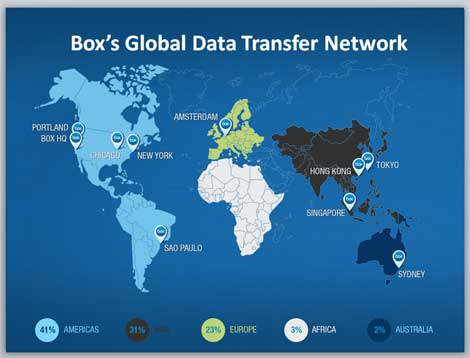 Neustar, an Internet analytics company, has validated Box's claims that the network provides 2.7-times-faster average upload speeds than the closest competitor across all locations. It's hard to say who Box considers to be its closest competitor, but the other leaders in the space are Citrix, EMC and Dropbox, to name a few.

When a customer uploads a file, Box's proprietary routing technology, which runs on each node in the infrastructure, finds the fastest path for the data to take.

5. Schneider Electric is one of Box's biggest customers. As of the end of January, Box had 25 million users and provided services to more than 225,000 organizations, but one customer that would be of particular interest to someone in the world of data centers is Schneider Electric. One would be hard pressed to find a data center that does not use at least some Schneider gear.

The French energy management behemoth has nearly 70,000 employees using Box -- a deployment that has grown from the initial 2,000-person one in 2012. Schneider stores more than 20.2 terabytes of data on Box in a centrally managed, collaborative content store. Content is shared internally across divisions and numerous subsidiaries as well externally with partners and customers.