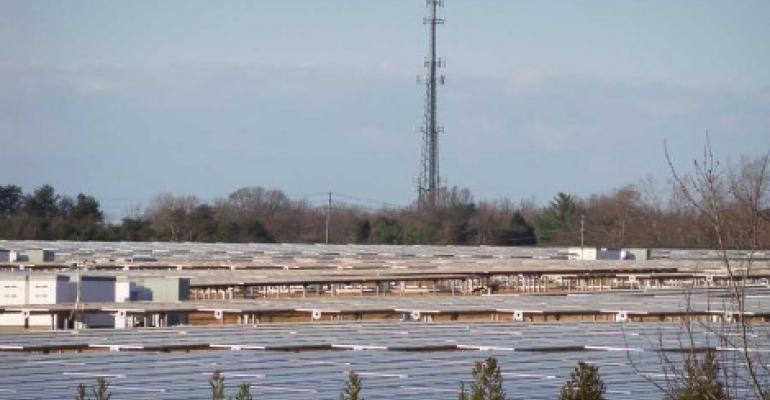 Apple is planning a third solar farm in the vicinity of its Maiden, North Carolina, data center.

Local officials approved a plan to annex land for the future solar farm to the City of Claremont on Monday, The Hickory Record reported. Claremont is about 20 miles north of Maiden.

The company is expected to invest $55 million in the 100-acre 17.5 megawatt plant, which will be its third in the area. It has one directly at the Maiden data center site and another one in Conover, another nearby town.

As concern with the impact of Internet on the environment has been raised by Greenpeace and in the press, some data center operators have been investing in renewable energy and actively promoting their actions. Companies like Google, Facebook and Microsoft, which also operate massive data centers, have made substantial investments in renewable energy generation to support their operations.

Apple is big on Solar, also planning a 20 megawatt solar farm in Reno, Nevada. The company's data center energy supply is 100 percent renewable, making it a Greenpeace darling. Also in North Carolina, it uses fuel cells that make electricity out of biogas from nearby landfills.

The newspaper reports that the upcoming solar project in Claremont will create 75 indirect jobs, which the company is sourcing locally. The market value of the land is more than $1.4 million. Apple also gave the city two tracts of land earmarked for greenways, recreation and public purposes.

North Carolina law says that 80 percent of the appraised value of a solar energy electric system is excluded from the city’s tax base.

Prior to Apple getting the thumbs up from Greenpeace, Gary Cook, senior IT analyst at Greenpeace called Apple out at an Uptime Symposium saying that it and Facebook should “wield (their) power to alter the energy paradigm.” Apple has stepped up in a big way since and continues to expand its use of solar and other renewable energy.

Cook praises what Apple has done since. In response to the news he said, “Apple’s latest investment in solar energy shows that it is committed to maintaining its record of powering the iCloud with 100 percent renewable energy. iCloud users should feel good knowing that clean, solar energy is powering their songs, videos and photos."

Cook also took the opportunity to call out another big fish Greenpeace has been gunning for: Amazon. “Jeff Bezos should take notice of Tim Cook’s leadership as Apple proves that we can power our online lives with renewable energy, leaving Amazon further in the dust," he said.

"With Amazon’s release of the new Fire smartphone and the associated growth in its photo storage, Amazon needs to commit to powering its data centers with 100% renewable energy, as its peers have done, or it risks becoming an even bigger polluter.”