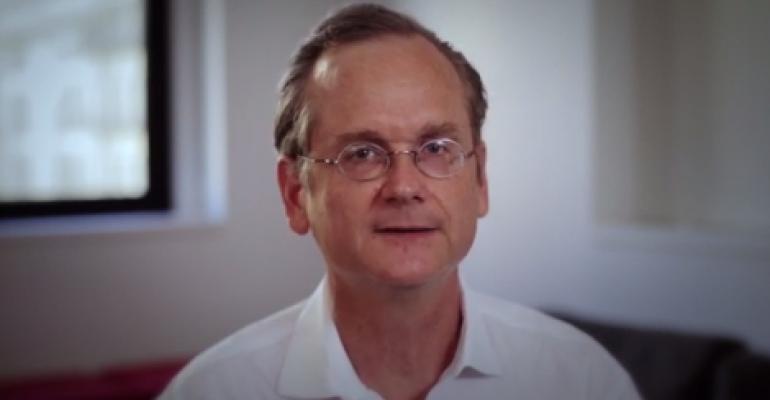 Lawrence Lessig, a political activist and Harvard Law professor, commands respect among developers because of his support of the open source movement. This reputation has helped fix outages that plagued the pledge website for his Mayday Super PAC from day two. (Image: Mayday PAC promo video)
Business

The online fundraising campaign for Lawrence Lessig’s Super PAC to end all Super PACs kicked into gear on May 1, and on May 2 the site started crashing. The small server hosting what was then a simple Wordpress website couldn’t handle the influx of donations and had scaling issues.

Thanks to Lessig’s reputation in the developer world and support for his Mayday PAC vision, however, a group of volunteers that included top engineering talent from all over the country quickly came together to resuscitate the site, which would go on to raise more than $1 million over a period of two weeks.

Using a combination of public cloud infrastructure and open source developer tools, the team, within a week, replaced a simple blog-style site with a fully-fledged web application that in addition to collecting money and hosting promotional material enables users to create their own pledge pages.

Mayday PAC’s goal is to raise millions in cash to support contenders in congressional races who pledge to fight for campaign finance reform. Super PACs (Political Action Committees) can raise unlimited amounts of cash and spend it to support political causes as long as they don’t give any of it directly to candidates and their campaigns.

Mayday’s goal is to exploit this loophole in order to close it. Lessig and company’s goal is to raise $12 million and use it to “make fundamental reform the key issue in five congressional races” in November, according to the Super PAC’s website.

Before the fundraising effort could cross its first $1 million threshold, however, the organization needed to fix some fundamental scaling issues. Before Lessig had a chance to send a call out for help on Twitter, a number of concerned engineers were already knocking on the door, offering to volunteer and fix the site, JT Olds, one of those volunteers, recalled.

Olds is an indistinguished engineer at Space Monkey, a distributed storage startup competing with the likes of Dropbox. On May 1 he was simply excited about Mayday and made a donation, and on May 2 he saw that the site had started to have issues and offered to help.

A replacement site with backend hosted on Google App Engine (a Platform-as-a-Service product) was already in the works, being built by a volunteer from Google. Meanwhile, the Wordpress site had to stay up, so the team that quickly formed (Olds included) decided to get a “beefy” Media Temple server to host it. “That weekend we ended up putting up a new architecture for the website, and over the course of the next week, we rewrote the site to be hosted by Google,” Olds said.

Besides limited horsepower of the server it was hosted on, the problem with the Wordpress site was caused by a plugin it was using to interface with Stripe, an online credit card payment processing service. They eventually got a hold of the developer that wrote the plugin and a Wordpress developer and fixed it. Olds said the site would probably have worked fine on the Media Temple server until the end of May (when the initial $1 million campaign was closing), but it was already decided to move it into cloud.

By that time there was already an active developer community chatting about the issue online and the majority was clamoring for migrating the site onto App Engine. The team ultimately chose Google’s cloud because the faction of people pushing for it was simply bigger than the other faction. “It was sort of a social decision of where we went with the code,” Olds said. But there were a few technological and cost advantages to going that route as well.

Cloud was less expensive. Aaron Lifshin, another volunteer who has since become Mayday CTO, said the Media Temple server cost about $750 per month. Now that everything is in the cloud, “it costs us a dollar a day or something, two dollars a day sometimes,” depending on demand. Once the re-architected site was launched, the Media Temple server was retired.

With Media Temple, Mayday was paying for anticipated peak demand all the time, while App Engine (like other public cloud infrastructure services) scales up and down automatically, and Google charges only for the capacity the site actually uses, Olds explained. There are also reliability benefits to App Engine, which offers replication across multiple VM instances, all automatically load-balanced.

The site’s backend services – a payment service, the service that lets people create their own pledge pages and authentication via Facebook, Google or Twitter accounts – are all now hosted in Google’s cloud. The landing pages are hosted on GitHub Pages, a GitHub service that hosts websites using code stored in its popular open source code repository.

Open source to the rescue

Both Lifshin and Olds said the Mayday site was saved so quickly by high-caliber engineers who worked for free because many engineers care deeply about open source and support Lessig. The Harvard Law School professor is a well-known political activist who in addition to fighting for campaign finance reform devotes a lot of time to the issues of copyright and net neutrality.  One of the founders of Creative Commons, he is a big supporter of the open source movement.

Rough going in second round, Valley bigwigs on board

Currently in the middle of its second much more ambitious fundraising round, Mayday, while running on a modern cloud architecture, is struggling to hit its $5 million goal by July 4. Donors had pledged about $1.4 million as of Wednesday afternoon -- nine days before the deadline.