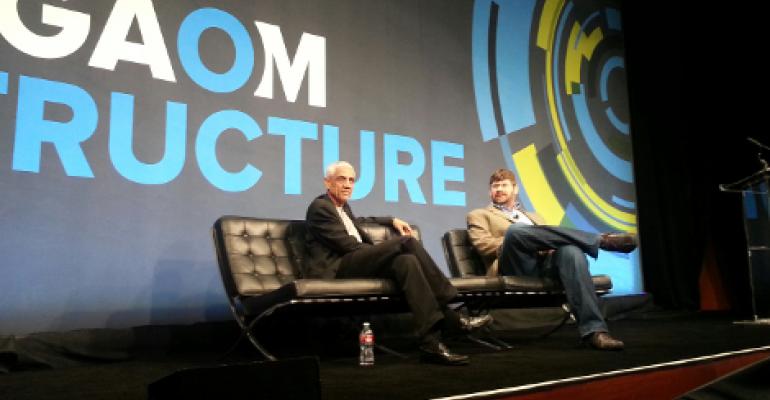 Khosla: Get the Humans Out of the Data Center

One of Silicon Valley’s most vociferous and controversial VCs says people suck at running IT, are too expensive and should be replaced by technology

Between battling activists in California for his right to block the only access road to a picturesque public beach that happens to run through his property and deciding which tech startup founder will get a lifeline to continue slaving away around the clock for another 12 months, India-born venture capitalist Vinod Khosla is happy to make some time to remind the public that machines are much better at doing things than humans are.

In May, the billionaire who co-founded Silicon Valley legend Sun Microsystems, told an audience at a Big Data and biomedicine conference in Stanford that we will have better healthcare when we have fewer doctors and more machines doing their work. This week, speaking at the GigaOm Structure conference in San Francisco, Khosla said the most important opportunity in the business of IT is getting rid of all the IT people.

“It’s ridiculous to have humans manage the level of complexity that we have humans manage inside the data center,” he said. Cost of hardware and software is a tiny fraction of the total cost of ownership of IT infrastructure because of the massive human cost. “People are a big cost in IT. Not equipment itself. Let’s take that out.”

The opportunity is in building a data center operating system that will automate resource management much like a computer OS does. This is what Google is doing with tools like Omega, which automates management of its global data center infrastructure. This is what Mesos (an open source cluster manager) is ultimately aimed at, he said.

Companies using Amazon Web Services or Microsoft Azure clouds instead of buying and running their own servers is a way of reducing IT staff. “All I’m saying is do it for the enterprise too,” Khosla said.

An innovation void that had to be filled

A big change in IT is only starting to happen, and it isn’t the hardware incumbents that are leading it. “I haven’t seen a new architectural innovation from an IBM or a HP or a Dell – and I’m going to get some nasty phone calls – in 20-30 years,” he said. “Innovation in computer architecture fundamentally stopped … and then this thing happened on the side.”

By “that thing” he meant Google, which innovated because it had to. Speaking at the same event earlier, Urs Hölzle, senior vice president of technical infrastructure (and employee number eight) at Google, said the company was initially forced to rethink data center infrastructure because it had to cut cost as it scaled. Off-the-shelf gear did not allow for that. Eventually, however, technical necessity became the impetus for innovation. Off-the-shelf systems just weren’t good enough for what the company was doing.

“They’ve invented a new way of doing things,” Khosla said. “I don’t think Google talks to Cisco about getting its networking gear. I don’t think they even look at those product lines.”

Other web companies – Facebook, Amazon – were in the same position and came up with their own ways of doing data centers. Google and Facebook share bits and pieces of that innovation with the industry. Both have open sourced a ton of software, and the latter has been open sourcing hardware it has designed through the Open Compute Project.

In the most recent examples, Google open sourced Kubernetes, an application container manager that is a leaner version of Omega, earlier this month, and Facebook Vice President of Infrastructure Engineering Jay Parikh announced this week at Structure that the company would contribute design of its first own top-of-rack network switch to the Open Compute Project.

Besides scale, web companies engineer for agility, because the rate of change in their world is much higher than it is in the enterprise. They build new applications and features constantly and deploy them immediately, and their infrastructure needs to be flexible enough to handle it. “And the same is happening in smaller ways inside the enterprise,” Khosla said.

It is only going to become truer in the enterprise over time, which is a big opportunity for startups. “Giving everybody else the benefits of what Google and AWS (Amazon Web Services) are doing for themselves is a massive opportunity … to innovate and start new companies, and I think we’re starting to see the beginning of it,” Khosla said.

The startup world is privy to this. Docker, which has built a commercial offering around an open source technology for application containers (a technology similar to an ingredient in Google’s secret sauce) of the same name, released version 1.0 of its software at the first and yet extremely well-attended DockerCon in San Francisco earlier this month. On the same day, Mesosphere, a startup that is commercializing the aforementioned open source cluster manager Mesos, announced that Andreessen Horowitz (another heavyweight Silicon Valley VC firm) had injected it with a $10.5 million Series A.

VC will flow to hardware startups in due time

As GigaOm executive editor Tom Krazit pointed out in his conversation with Khosla on stage, there hasn’t really been a whole lot of VC investment in data center hardware startups. Khosla replied that the money would come in due time. “There’s a cycle of innovation going on, which then leads to a cycle of investment,” he said. “I’m pretty optimistic there’ll be a lot more interest in this area, as marquee offerings, like my friend Andy Bechtolsheim’s new company Arista, really start to get the ball rolling.”

Bechtolsheim co-founded Sun together with Khosla and a third partner, Scott McNealy, in the early 80s. He was also the first major investor in Google in the 90s. His current company Arista, which makes network switches for hyper-scale data centers and whose customers include Facebook, Morgan Stanley, Netflix and Equinix, held a successful IPO on the New York Stock Exchange on June 6, its shares debuting at about $12 more than expected.

Another example of a successful next-gen hardware startup is Nutanix, which has blended storage and compute in one box, making SAN and NAS useless, raised about $100 million in a Series D round in January. Khosla Ventures participated in the round. “Nutanix is doing really, really well,” he said. There are others, and once the successful ones ramp up, more venture capital will open up to companies in this space. “Once you get a couple of role models, investors tend to follow.”