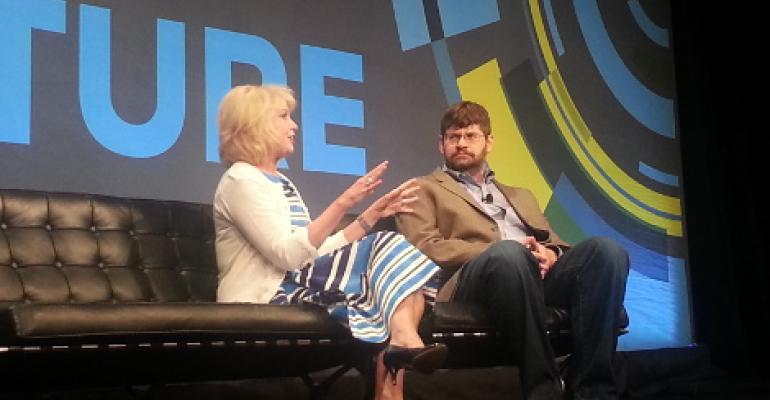 Getting deeper into the business of building customized processors for hyper-scale data centers, Intel has cooked up a hybrid chip that bolts a Field-Programmable Gate Array onto its high-end Xeon E5 server chip. The two work coherently and will come in a single package, socket-compatible with regular Xeon chips.

FPGAs are a popular way for customers to test different chip configurations before hard-wiring them into their infrastructure. Intel is offering the hybrid chip as a dynamically configurable destination for off-loading certain workloads from the main CPU.

Diane Bryant, general manager of Intel’s data center group, said the new chips will act as accelerators for applications that can take advantage of the off-loading capabilities. Users will be able to customize the accelerator, however, for their specific workload.

Bryant announced the product at GigaOm Structure in San Francisco Wednesday. The chips are not yet available, and she could not say when exactly they would become available other than suggesting it would be within about a year.

Using FPGA for off-loading provides between 10 and 30 times better performance, Bryant said. “By moving it into the Xeon package we’ll double that performance benefit.”

Intel plans to offer the solution as a way for a customer to test what configurations work and then order Server-on-Chip cards with those specific configurations as a permanent solution.

The second option will be to just deploy the original hybrid chips at scale to gain the ability to constantly reconfigure them as needs change. “You can reprogram for a different algorithm or a different workload on the fly,” Bryant said.

Custom chips have become a big business for Intel. Hyper-scale data center operators, such as Facebook, Google or Amazon, want to customize every single piece of their infrastructure stacks (including server chips) for their specific needs, because at their scale even modest performance gains mean many millions of dollars in savings.

Last year, Intel said it had delivered 15 custom CPUs to end users, including Facebook and eBay. More than double that amount is in the pipeline this year, Bryant said.

In addition to the Internet giants, Intel considers cloud service providers and telco companies a big market for custom chips.

The chipmaker has been engaged with many of the large-scale cloud service providers since about 2007, when it realized how much they were affected by their data center technology. “This has been a continuous progression of customization,” Bryant said.

“These are highly technical corporations. These folks know exactly what they need to accelerate their workload.”

Intel is not alone in the custom-chip market. It faces competition from AMD and other companies that license processor architecture from ARM Holdings and modify it to optimize for various workload types. The company does not take this competition lightly.

“We have always had competition and we will always have competition,” Bryant said. “We are amply paranoid about competition.”

Because of this paranoia, the company always invests heavily in adding products to its portfolio to make sure every workload runs best on Intel.

Having run Intel’s entire IT operation as CIO in the past, Bryant is very conscious of the fact that customers do not like to have only one vendor for a piece of technology in their data centers. “I’m not naïve to the fact that everyone would like a second source,” she said.