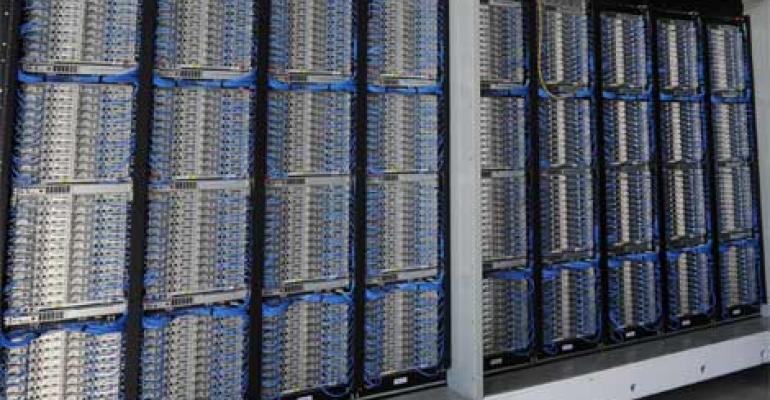 One of the ways Microsoft supports its cloud servers is packing them in ITPAC modules which can be deployed quickly to expand capacity in any location (Photo: Microsoft)
Business

Did Washington State Just Lose Microsoft's $1.1B to Iowa?

Back in 2008 Microsoft and Yahoo halted Quincy, Washington, data center construction projects. The reason was tax breaks, or lack thereof.  The spat was eventually resolved and the companies built numerous server farms in Quincy. Microsoft's recent announcement of a $1.1 billion dollar data center build in Iowa, however, has led some to suggest that there may have been a sequel without a happy ending.

Last month, the Seattle Times published an editorial saying the Iowa project was a billion-dollar lesson to the State of Washington. The state legislature adjourned this year without extending some high-tech tax breaks that were set to expire, and six weeks later came the Iowa news.

The editorial is not the first time Washington State lawmakers have been shamed for inaction on data center tax breaks. During the 2008 confrontation Microsoft's state government affairs director DeLee Shoemaker said: “States such as Iowa and others have come on board with very attractive tax incentive packages to get data centers to locate in their communities. These other states that are in tough economic times and are looking to attract new business and new investments … Washington state is no longer competitive for this type of business.”

The strategy worked. Pressure from the tech companies got the taxes reinstated and Quincy bloomed. Today, there are nine large server farms and a growing community in what was once green-bean country.

"Tax incentives are becoming one of the more important factors in selecting a site," Rick Kurtzbein, data center analyst at 451 Research, said. "It extends from the state level down to the local municipality. There’s a bunch of activity in Minneapolis, for example, in part thanks to tax cuts."

Iowa is not new for Microsoft, which already has a data center in West Des Moines, first announced in 2008. The company has big footprints in both states and is in position to pit them against one another.

In December of 2013, Microsoft was looking to expand in Quincy, stating intentions to acquire 200 acres of land. Iowa offered a $20 million break on sales tax, and Washington was competitive, but only if construction commenced before July 2015, when the tax breaks were set to expire.

Shoemaker went on record saying that Iowa went after the business harder and noted once again that failure to offer tax incentives made Washington look less competitive for future decisions. But Microsoft may simply have been setting groundwork for a better tax environment in its home state in the future. Quincy offers a lot of cheap and environmentally friendly power, generated by hydroelectric plants, which alone makes it a very attractive location.

"I believe that some manipulation goes on on the part of tech giants," Kurtzbein said. "States will compete with one another for these large deals. There's an opportunity to play them against one another."

Incentives do work for states

On the opposite coast, for example, the State of Virginia sweetened the pot in fear of losing construction projects to surrounding areas, and DuPont Fabros, Microsoft, Digital Realty, Capital One and RagingWire all announced intentions to invest and take advantage of the beefed-up incentives. Construction there is booming. Texas also decided to add incentives, and more data center construction followed.

The economic impact of data centers is undeniable. “Data centers themselves hire relatively few employees, however, the businesses that colocate in the larger facilities can certainly add to the jobs," Kurzbein said. "Hosting companies, cloud companies or really with any enterprise, you can see an increase in jobs around the customers that go into these larger data centers. Those employees use local restaurants and hotels if they’re travelling. In the best of all worlds, you get a 'herding' effect, where you attract more and more providers.”

The herding effect is now happening in Iowa, where massive builds from Google and Facebook are also in the works. Google's investment in the state blew past $1.5 billion. Facebook has already started construction of a second 476,000 square foot building to house its growing armada of servers. Now Microsoft is spending $1.1 billion.