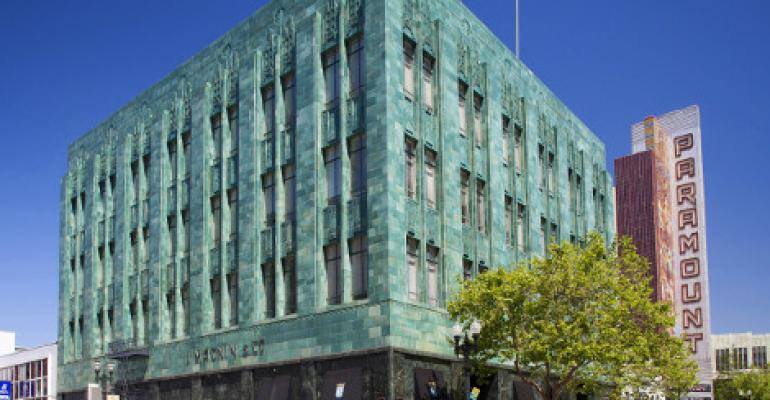 Vigilent&#8217;s offices are located in Oakland, California, in a building next to Oakland&#8217;s famous Paramount Theatre.
Business

This is the first time Schneider is getting into controlling mission critical systems in data centers. Its DCIM software has not gone beyond monitoring and asset management until now.

“Schneider Electric has been … careful [about] moving into controlling things on the IT floor,” Henrik Leerberg, global product line director for data center software for the French power distribution and automation giant, said. “We’ve been controlling buildings for years … but in the IT space, having a central piece controlling a lot of critical equipment has been kind of … foreign waters for us.”

As vendors compete in the growing DCIM market, they have been expanding capabilities to provide more and more of a holistic view of a data center’s status. They expand capabilities by acquiring smaller vendors or partnering and integrating solutions.

Schneider has done a little bit of both. In 2011, it bought intellectual property for a piece of DCIM software from a company called Viridity.

Vigilent has a “sophisticated machine-learning control software” that dynamically controls capacity of air conditioning units based on demand, its CEO Dave Hudson said.

Before the control software is deployed for on-going management, however, Vigilent instruments a data center with sensors, installs control kits for air conditioning units and goes through an initial monitoring period. Control decisions are then based on that baseline assessment.

The deal is significant for Vigilent, a 70-plus-employee Oakland, California-based startup. Schneider's sales and marketing muscle has the potential to get its software into thousands of data centers around the world, Hudson said.

StruxureWare comes in a variety of flavors, and the data center version is only one of them. The company sells StruxureWare in modules, so customers can pick and choose from a list of DCIM capabilities and buy only the pieces that fit their needs.

Schneider plans to complete the integration with Vigilient by November, Leerberg said. Once that is complete, there will be a new module called Cooling Optimize in the StruxureWare portfolio. It will be based entirely on Vigilent’s technology but branded as StruxureWare.

To use it, however, customers will need to have at least one other base component of StruxureWare in place, Leerberg said.

Both vendors will market the integrated solution, but Vigilent will continue selling a stand-alone product as well.

A Vigilent deployment in a typical data center with about 50,000 square feet of white space costs about $250,000 on average, Hudson said. Such a deployment will usually pay for itself within two years, he estimated.

Schneider charges StruxureWare customers differently, on a per-rack basis, and the plan is to adopt the same billing scheme for the future cooling-optimization module. Leerberg said the module will cost about $300 per rack, which is about the same amount the vendor charges for other StruxureWare modules. But, the bigger the deployment, the lower the cost per-rack, he added.