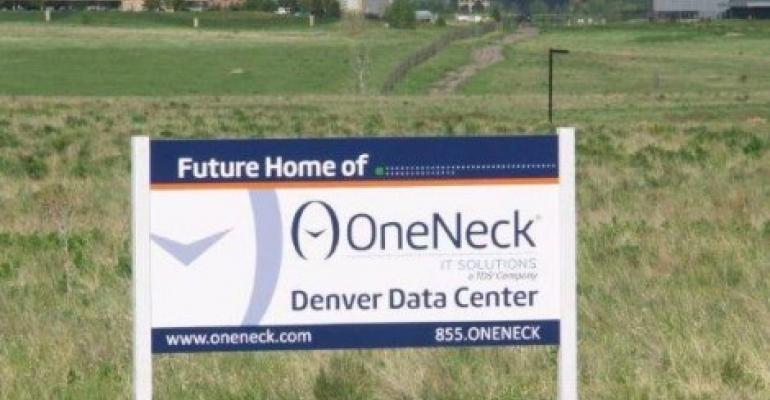 OneNeck It Solutions is investing $20 million on a new data center in Colorado, its first in the state. OneNeck parent company TDS acquired Englewood-based MSN Communications in October 2013, unifying it under the OneNeck IT brand.

At the time of the acquisition, the company announced intentions to build, which it has now confirmed. OneNeck has lined up construction companies and has secured incentives from Douglas County Commissioners. The project leverages a personal property tax rebate and construction fee waivers.

“In an effort to continue strategically supporting investing in projects that provide a strong economic foundation for Douglas County, we are proud to support OneNeck in this endeavor,” Jill Repella, Douglas County commissioner, said. “We believe in providing an environment where businesses can succeed. For this reason, it is a pleasure to team up with OneNeck on their data center build, a project that will certainly add to our community’s economic growth.”

The planned 35,000 square foot data center is being built on 11.2 acres of land on Concord Center Drive in Englewood. Expected completion is early 2015. OneNeck will deploy its ReliaCloud Infrastructure-as-a-Service in the new data center in addition to offering managed services. This will be its seventh data center. Its other facilities are in the Midwest and Arizona.

The overall project is designed for up to five phases totaling 160,000 square feet and it will support data center modules. The electrical system will have multiple levels of redundancy and backup. The company expects the facility to provide cabinet power densities of 5kW on average, with some capable of going up to 20kW.

“We are excited to make this additional investment in the Denver area,” says Phil LaForge, president and CEO of OneNeck. “Our data center will be built to withstand natural disasters, which means area businesses can rest assured [that] their IT infrastructure is safe, protected and always accessible in our new ... data center.”

The MSN Communications acquisition gives the overall company strong footing in the area prior to the building of this data center. TDS has been bolstering their cloud strategy via a mix of internal development and targeted acquisitions. It acquired OneNeck in 2011 for $95 million as a major foundation for its cloud.

About 30 local companies will be involved in the construction of the building. Denver-area contractor JE Dunn Construction will coordinate the project with support from INVISION Architecture, Faith Technologies and North American Mechanical.

ReliaCloud is an IaaS solution built on an infrastructure stack by Cisco, EMC and VMware. It is desgined for resource-intensive applications and databases.