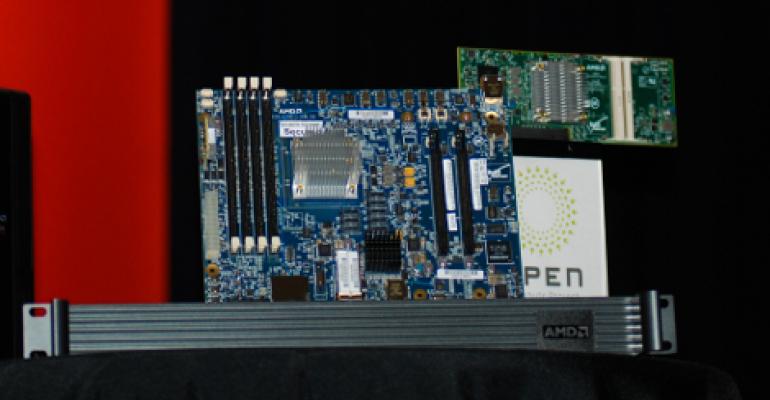 Chipmaker ties GPU-assisted computing, ARM and x86 into a single strategy for the server market.

AMD has decided there is no need for a single server design to be limited to an x86 processor or an ARM chip and announced a plan to create a reference architecture for a system where the two are fully interchangeable.

The plan is to enable hardware vendors to design and validate one server for both ARM and x86 chips. If it works, the approach may significantly speed up the adoption of low-power ARM chips – today used primarily in mobile devices – by server vendors and end users.

The Sunnyvale, Calif., chipmaker calls the initiative “Project SkyBridge,” and promises to have the design framework and first products out in 2015. SkyBridge System-on-Chips (SoCs) will also carry AMD’s graphics processing units (GPUs) for more compute horsepower.

Suresh Gopalakrishnan, vice president and general manager of AMD’s server business unit, said AMD was the only company able to bring x86 and ARM together and give hardware manufacturers an opportunity to leverage investment into a single system across two distinct chip architectures. “This is a unique thing that only AMD can do,”he said.

AMD’s arch nemesis Intel does not license ARM chips, positioning its Atom chips as the alternative to ARM in the data center. AMD’s competitors in the ARM ecosystem today cannot match the amount of IP the Silicon Valley chipmaker has built around the x86 architecture over the years.

ARM and x86 versions of the SkyBidge SoC will be pin-compatible and have the same IO, memory and GPU cores, Gopalakrishnan said.

The company has not said whether there is interest from hardware vendors in its “ambidextrous” computing project.

Both ARM and GPU-assisted computing have been key to AMD’s strategy in the data center market recently. The company has been struggling to win share of the x86 server market away from Intel and has been promoting ARM as the future of scale-out data centers.

This week’s announcement is both an acknowledgment that the x86 architecture will continue to be a mainstay in the data center as well as a roadmap for addressing that reality while leveraging its existing investment in ARM and Heterogeneous System Architecture (its name for using GPUs to offload processing loads from the CPU).

AMD also announced that it had bought an architectural license for ARM cores from the United Kingdom’s ARM Holdings, which means it can now modify the cores. Until recently, the company only had an implementation license for ARM’s Cortex-A57 core, which meant it could implement the cores without modifications.

“The architectural license allows us to take the instruction set and … implement it in any way we want,” Gopalakrishnan explained. The license enables the company to leverage the institutional processor engineering expertise and IP it has accumulated over its lifetime to fine-tune the ARM architecture for its needs.

AMD will be able to “make it faster, make it higher-performance, based on all the stuff that we’ve been doing for a while.” While there are many modifications AMD can do, the primary ones are increasing the amount of instructions the chip can process in one clock cycle and increasing core frequency, he explained.

At a press conference in San Francisco, Calif., Monday, AMD for the first time demonstrated in public a 64-bit ARM server in action. A motherboard powered by the company’s Seattle SoC ran a WordPress website and served video.

AMD started sampling Seattle in January, becoming one of the first companies out with a 64-bit ARM processor. Another front-runner in this space is Sunnyvale-based Applied Micro.