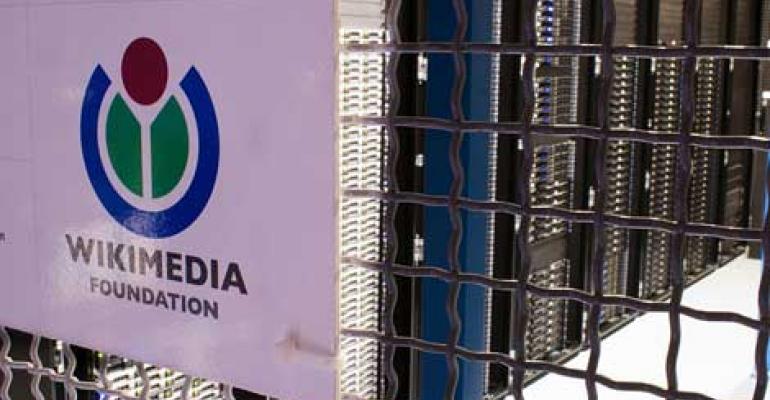 A Wikimedia cage inside one of the foundation&#8217;s data centers
Business

Foundation takes space at a Dallas-Fort Worth data center as it phases its Tampa, Florida, hosting footprint out

The Wikimedia Foundation, which is behind one of the world’s busiest websites, Wikipedia, has chosen a CyrusOne facility in the Dallas-Fort Worth region of Texas as its new data center. The non-profit organization announced it was on the hunt for space last October, a journey that has now ended in Carrollton - a town just outside of Dallas.

The decision comes after 39 bids, 18 site visits and the eventual short list of three vendors. Wikimedia was not without its suitors, and the deal is a win both in terms of size and publicity for CyrusOne, the Carrollton-based colocation provider.

Wikimedia’s primary data center is in Ashburn, Virginia, which it named as its official home in January 2013. The foundation has been winding down its original hosting presence in Tampa, Florida, which is where Wikipedia "grew up," according to a post on its engineering blog.

Wikimedia said it was seeking a facility that could handle the full load of its global traffic in case of emergency, as well as handle partial load at all times. The organization will build its presence in CyrusOne with this in mind.

CyrusOne provided competitive pricing in addition to a modern facility with highly redundant and efficient power and cooling infrastructure that Wikimedia was seeking.

Also going into the decision was the fact that the State of Texas maintained an independent power grid, which was key in maintaining uptime in case of grid outages in Ashburn. Outages are a sensitive subject for Wikipedia, which was knocked offline by a fiber cut in 2012.

“We look forward to working with CyrusOne in years to come as we continue to increase reliability and responsiveness of Wikimedia’s sites and services to provide free knowledge to hundreds of millions of people around the world,” Mark Bergsma, director of technical operations and lead operations architect at the foundation, wrote in the blog post.

In its initial request, the company revealed it was seeking capacity for at least 32 enclosures, with expansion possibilities.