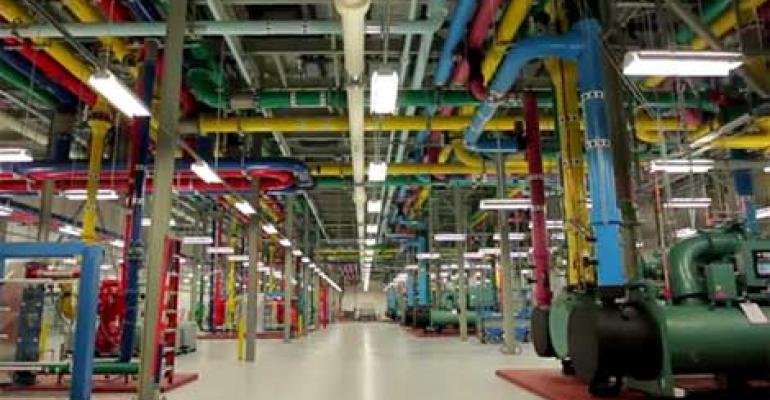 A look inside the cooling plant at a Google data center. (Photo: Google)
Companies>Google (Alphabet)

Officials approved the construction of a new facility, which will be twice the size of the existing Google data center in Irish capital.

Google is expanding in Ireland and has recently received municipal approval by Dublin City Council for its new €150 million (around $205 million US) data center in west Dublin. The company first announced it was planning to construct a new 30,361 square meter (326,803 square feet) last February.

The new data center is expected to be twice the size of its existing € 75 million data center opened in Dublin in 2012, the Irish Times reported. The facility will be two stories high and reside next to its existing facility in Clondalkin, Dublin 22. The development will create up to 300 construction jobs as well as 60 full-time jobs once operational.

Google chose Dublin for its data centers because it believes the location has the right combination of energy infrastructure, available land and workforce.

Dublin is unique amongst major European data center hubs in that its appeal is based on climate, rather than connectivity. While the thriving data center communities in London, Amsterdam and Frankfurt are built atop network intersections in key business cities, Dublin has become one of the world’s favored locations for free cooling – the use of fresh air to cool servers.

It is a prime example of how free cooling is giving rise to clusters of energy-efficient facilities in cool climates.

Google continues investing significantly in expansion worldwide, after spending $7.3 billion on its data centers in 2013.

Also in Dublin,  Microsoft announced plans for a $230 million expansion of its existing cloud hub in December, where it has now invested more than $806 million (€594 million). Microsoft is several miles down the road from Google’s Dublin campus in Profile Park, where it completed a $100 million expansion in 2012.