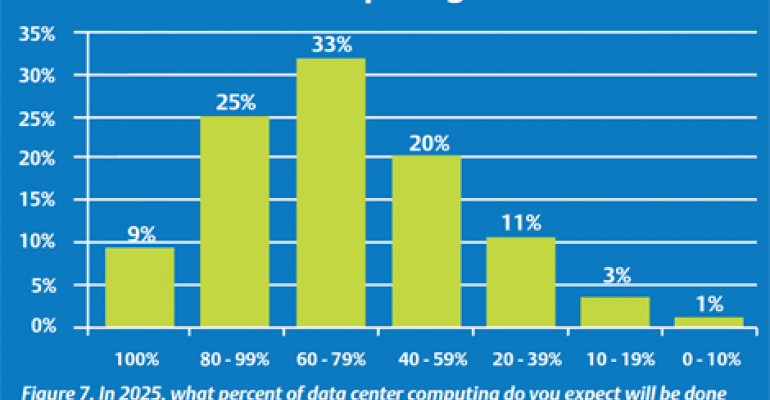 What will the data center look like in 2025? An Emerson survey suggests we'll see smaller data centers, higher densities, and more use of renewable energy.

What will the data center look like in 2025? Enterprise data centers will be much smaller, power densities will be much higher, and the majority of IT workloads will have moved to cloud computing platforms. That's the consensus from data center professionals surveyed by Emerson Network Power for its Data Center 2025 Project, who were tasked to imagine what facilities will look like 11 years from now.

For perspective, consider how much has changed since 2003. That was the era of the dot-com bust, a surplus of data center capacity, rack densities in the 250 watt to 1.5 kW range, and no social media revolution.

"We didn’t know what to expect," said Steve Hassell President, Data Center Solutions at Emerson. "We wanted to step all the way back and get a feel of where the industry is going. There were expected results such as increased utilization of the cloud, and some ambitious predictions, such as largely solar-powered data centers and power densities exceeding 50kW per rack.

"The common denominator was that most believe we’ll undergo a massive change to parallel the change that occurred the 11 years prior," added Hassell. "The pace of change is only going to increase."

Emerson tapped over 800 data center professionals to generate the findings for Data Center 2025.  Sixty seven percent of participants believe at least 60 percent of computing will be cloud-based in the year 2025. It’s also likely that enterprise data centers will at least shrink in size: 58 percent expect that data centers will be half the size of current facilities or smaller, while 10 percent of participants believe the enterprise data center of 2025 will be one-tenth the size of current facilities. 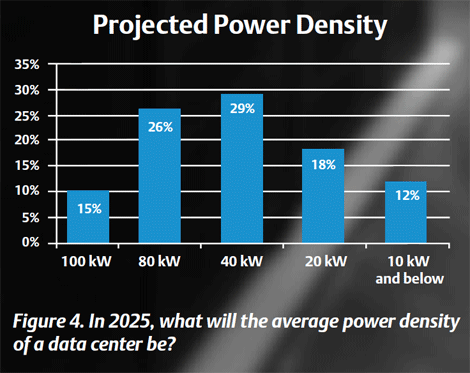 What about power? On average, experts predict power density in 2025 will climb to 52 kilowatts per rack. However, a significant majority of participants in survey (64 percent) believe that it will require less energy in 2025 to produce the same level of data center computing performance available today.

Despite long-held expectations of soaring power densities, Emerson Network Power’s Data Center Users’ Group notes that average density has remained relatively flat since peaking at 6kW nearly a decade ago. Yet the Data Center 2025 findings predict a radical change that will affect the physical environment of the data center. 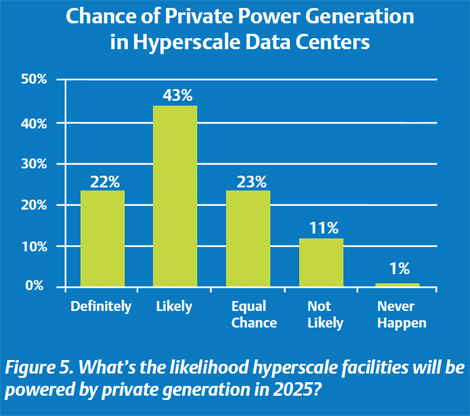 Other notable survey results and forecasts from the report:

“The data center of 2025 certainly won’t be one data center. The analogy I like to use is to transport,” said Andy Lawrence, vice president of Datacenter Technologies and Eco-efficient IT at 451 Research. “On the road, we see sports cars and family cars; we see buses and we see trucks. They have different kinds of engines, different types of seating and different characteristics in terms of energy consumption and reliability. We are going to see something similar to that in the data center world. In fact that is already happening, and I expect it to continue.”

"The future, to us, is looking increasingly like one that is automated, and converged," said Emerson's Hassell, "The facility side and the IT side is coming together and operating as an integrated unit. It’s the only way to deal with the speed and complexity."