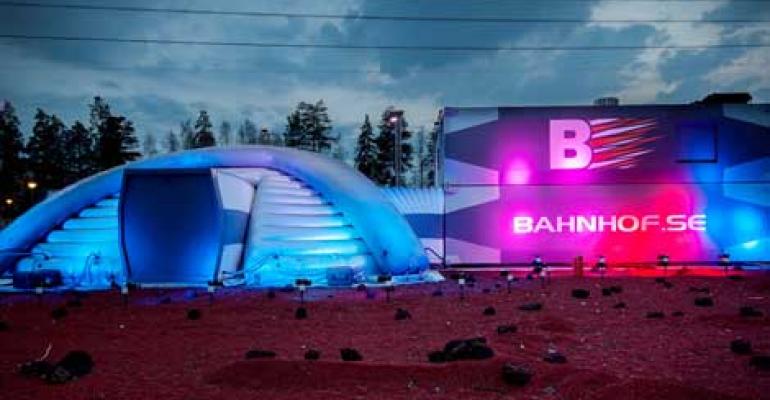 Bahnhof&#8217;s modular data center, known as Lajka, has gone live. The modules are designed for high-security, but with a space station aesthetic. (Photo: Bahnhof)
Design

Servers as Radiators: Can a Data Center Heat Stockholm?

Sweden's Bahnhof are known for creating offbeat data center designs, including a subterranean bunker designed to look like the lair of a James Bond villain.Now the company is talking about recycling the heat generated from the data center to heat surrounding housing.

Sweden’s Bahnhof is the master of offbeat data center design projects. Sexy sci-fi is its design aesthetic, with most of its data center designs looking like they came straight out of a movie from the future.  There’s the “James Bond Villain” data center, and modular data centers that look like space stations.

One of the company’s most ambitious projects has taken a new direction. Bahnhof says it is searching for a new home for a unique data center that could also warm homes in downtown Stockholm, CEO Jon Karlung said this week.

The company's original plan was to convert a huge former natural gas holding tank in Stockholm into a five-story data center. The gasometer is a cylindrical building erected in 1893, constructed with red bricks and enclosed by a spectacular wood and steel ceiling structure as ceiling, which Bahnhof says contributes to the “sacral character of the space.” The project has been delayed by more mundane considerations.

“Unfortunately the politicians took a while before they could decide,"  said Karlung. "It’s not scrapped, but in the meantime we’ve focused on another thing.”

Due to the political delays for the gas station progress, the company is now negotiating with the city for a different spot. The idea behind the new project is to resell the energy from the excess heat from the data center to the local utility, which can use it to heat the surrounding homes.

“It’s in a central area in Stockholm,” said Karlung. “The solution we’re building today. The data center is a big radiator, and if you live in cold climate this makes a lot of sense. We pump the heat back and sell it to the utility company.

“The financial and business model is quite valid, but I think it will not be at the gas meter at this moment," said Karlung. "It’s locked in the political (process). In the meantime, you have to find another idea. The model for reheating is purely financial. If you get half the money back, it will be very hard for others to compete. If you have a city that’s cold in the winter, you have to heat it up. It’s strange it hasn’t been done.”

In fact, the concept of using excess heat to warm nearby buildings has been discussed within the industry, and there are a handful of implementations. TELUS in Vancouver is a prime example, with TELUS tapping waste heat from its data center in Vancouver to power heating and cooling systems of its adjacent $750 million mixed-use Telus Garden development. In London, Telehouse began using excess heat in a Docklands data center to heat nearby homes and businesses in 2009. IBM has a data center in Switzerland that warms a nearby community swimming pool.

There was also an unusual concept put forth by researchers from Microsoft and the University of Virginia in a paper published in 2011. It suggested that large cloud infrastructures could be distributed across offices and homes, which would use exhaust heat from cabinets of servers to supplement (or even replace) their on-site heating systems.

The primary challenge for Bahnhof is finding a location for the project within a densely populated urban area.“The reason why this has not been widespread, is that very seldom do you have a district heating system built,” said Karlung. "You need a city, a densely populated area and you need a district heating system. Currently in Stockholm, heat is being generated by burning coal.”

While one project has been put on hiatus, Bahnhof has successfully launched its modular “space station” data center, named Lajka. “The modular project went live a couple of weeks ago,” said Karlung. “It’s a containerized solution, but it’s not containers. It’s a high security facility in a modular installation.”

The design features a spacious double-wide module built with bullet-proof steel that will house servers, which attaches to “The Dome,” an inflatable central vestibule that houses security staff.

"For the moment, we will use it ourselves," said Karlung. "But there are blueprints for it, and it’s possible to buy. The product line isn’t quite there yet but it’s possible to make if you want to make it. I assume if you’re a military organization, it would make sense. You can drive by with a truck and put it into place quickly.”

The company is known for the "James Bond Villain" data center, a high-tech server farm built in a former nuclear bunker beneath Stockholm. The subterranean lair is outfitted with waterfalls, a greenhouse-style NOC, and a glass-enclosed conference room “floating” above the colocation floor. The facility reflects Karlung’s belief that data centers shouldn’t just be cool – they should LOOK cool, too. 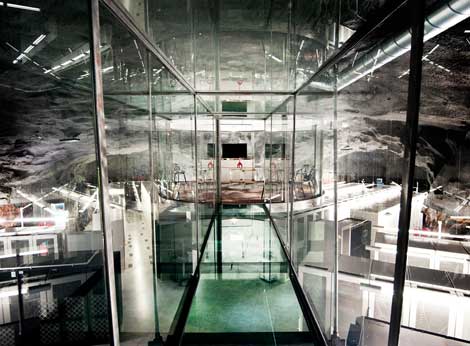 The "floating room" at the Pionen underground data center, a glass-enclosed conference room raised above the data hall within the subterranean facility. (Photo: Bahnhof)