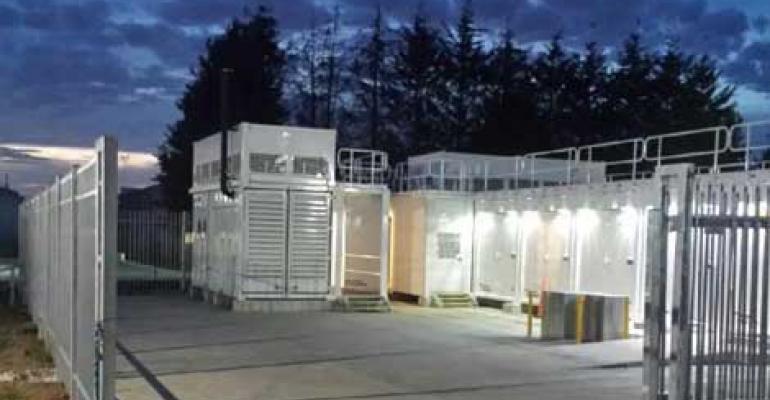 The exterior of a recent deployment of a Datapod modular data center system for a government customer near Melbourne. (Photo: Datapod)
Design

Datapod has recently completed a modular data center deployment for an Australian Federal Government Department in Australia, where the customer required densities of 15kW to 30kW per rack.

Datapod has recently completed a modular data center deployment for an Australian Federal Government Department in Melbourne. Datapod is based in Australia, but has gone global with its modular design, which provides flexibility and the ability to assemble a complete deployment from components. The modular form factor has been effective in situations where a client requires meaningful power densities, as was the case with the Melbourne installation.

"The customer selected a medium density design, housing two dozen racks (24) with an average power density of 15kW with a 30kW peak," said Datapod Director Adam Smith. "The project called for a one-stop shop, including all site-infrastructure, site preparation and security. As every module was a standard build we were able to have the system assembled and tested in the factory then shipped to site. This enabled us to deploy the system onsite in just a few days.

“The customer requested a proven modular architecture that would form the basis of their whole fleet of new-generation facilities, enabling them to transfer assets; increasing or decreasing capacity as their business needs evolved,” said Smith.

Datapod was founded in 2007, and has deployed dozens of modules for customers in defense, oil and gas industry and major research institutions. It has deployed modules in Europe and Asia, and is now expanding to the Americas, Middle East and Africa.

The company's offerings include both all-in-one containers with both IT and infrastructure equipment, or specialized modules which can include "entrypods" that serve as access control man-trap systems or "utilitypods" holding generators and fuel tanks.

“The customer had a wide range of data center providers to choose from, with local and overseas providers submitting tenders for the project. It was Datapod's proven capability, end-to-end architecture and ability to guarantee lifetime vendor support that gave the customer the confidence in choosing Datapod,” Mr Smith said.