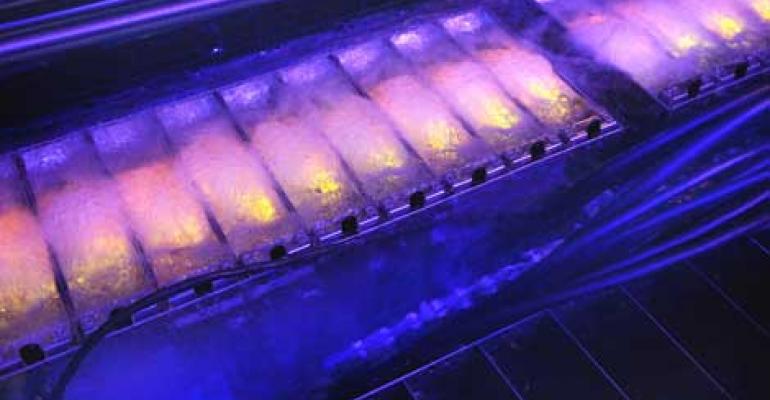 New From 3M: Boiling Liquid to Cool Your Servers

Will the high-density servers of the future live in blue-lit pools of boiling liquid? Making the case for a new approach to cooling, 3M this week unveiled a proof-of-concept for its immersion cooling solution.

Will the high-density servers of the future live in blue-lit pools of boiling liquid? Making the case for a new approach to cooling, 3M this week unveiled a proof-of-concept for its immersion cooling solution in a Minneapolis lab. Instead of racks, the ICE-X supercomputing hardware from SGI is fully immersed in a tank of Novec, a dielectric fluid from 3M.

It's the latest step forward for 3M in its effort to commercialize open bath immersion (OBI), a passive two-phase cooling technique which uses a boiling liquid to remove heat from a surface and then condenses the liquid for reuse, all without a pump.

3M is positioning its Novec-based immersion tank as a technique to manage high-density workloads that are difficult to cool with traditional air-based HVAC systems. 3M says OBI can reduce cooling energy costs by 95 percent by eliminating the need for raised flooring and room-level air cooling. It uses a smaller footprint for the same workloads, and can reduce water consumption by eliminating municipal water usage for evaporative cooling.

This week's demo is the next step in the company's plan to commercialize OBI, a technology Data Center Knowledge has been tracking since 2012. It's notable for the involvement of SGI, a leading player in high-performance computing, and chipmaker Intel, whose E5-2600 Xeon chips were used in the proof-of-concept.

"Through this collaboration with Intel and 3M, we are able to demonstrate a proof-of-concept showcasing an extremely innovative capability to reduce energy use in data centers, while optimizing performance," said Jorge Titinger, president and CEO of SGI. "Built entirely on industry-standard hardware and software components, the SGI ICE X solution enables significant decreases in energy requirements for customers, lowering total cost of ownership and impact on the environment."

For Intel, the collaboration represents its latest step to support immersion cooling, where liquid comes into direct contact with components. In 2012, the chipmaker began optimizing its technology for servers immersed in oil. 3M and SGI are taking a slightly different approach with open bath immersion. But Intel clearly sees the value in preparing for a future in which denser HPC environments may prompt more users to consider immersion.

"Intel is continually innovating and improving microprocessor technologies to meet today’s datacenter demands and is working with companies like 3M and SGI to explore advanced cooling technologies that improve energy efficiency in data centers while also containing operating costs," said Charles Wuishpard, vice president, data center group and general manager, Workstation and High Performance Computing at Intel. "As the backbone of the data economy, modern data centers must increase the raw performance they deliver, but also do so efficiently by containing power consumption and operating costs."

The companies are working with the Naval Research Laboratory, Lawrence Berkeley National Labs and Schneider Electric to deploy an identical system "with the intention to demonstrate the viability of the technology at any scale." Meanwhile, cooling specialist Allied Control has deployed several OBI-based solutions for Bitcoin mining.

"These advancements are a significant stepping stone in accelerating industry wide collaboration to optimize computer hardware design.” said Joe Koch, business director for 3M Electronics Markets Materials. "We are thrilled with the work that our collaboration with SGI and Intel has produced."