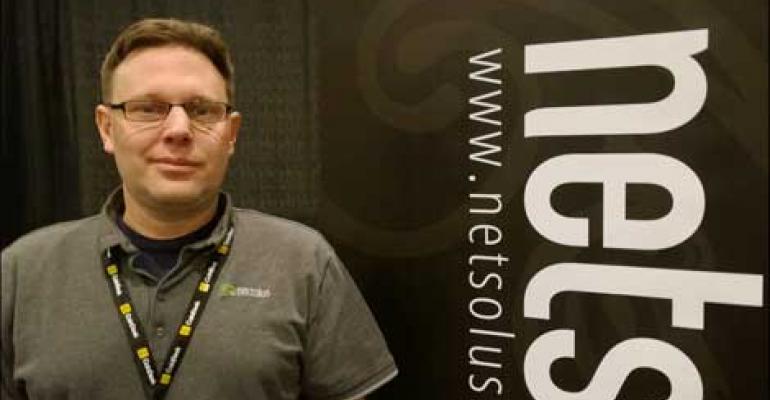 Netsolus is perhaps the best example of a data center provider riding the Bitcoin wave. The Kansas City company says its Bitcoin mining clients represent 75 percent of the company's revenue.

NEW YORK - Many data center providers are testing the waters of the market for hosting Bitcoin hardware. Netsolus has jumped in with both feet, and quickly built a niche in hosting custom gear for virtual currency. Bitcoin customers represent 75 percent of the revenue for the Kansas City-based service provider, which is now building custom data centers for large industrial mining customers.

"We're going to be bringing close to 20 megawatts online," said Bryan Ballard,the Chief Technology Officer for Netsolus, who discussed his company's virtual currency hosting business Monday on a panel at the Inside Bitcoins conference in New York. "We're seeing more of the industrial miners."

Netsolus is perhaps the best example of a data center provider riding the Bitcoin wave, and building a business focused on the needs of the virtual currency community. It's made some adjustments to accommodate the requirements of mining hardware rigs, which feature custom chips called ASICs (Application Specific Integrated Circuits) that run constantly as they crunch data for creating and tracking bitcoins.

The company's new facilities will be very different than its primary data center in the Oak Tower, a former central office for AT&T in Kansas City. The Netsolus-built Bitcoin mines will be lower-tier facilities that forego traditional raised floors and redundant power infrastructure, opting instead for powered shells with slab floors filled with custom ASIC systems housed on shelving.

Netsolus now has five data centers, including several custom Bitcoin mining sites totaling about 3 megawatts of power capacity. The company is discreet about the details of these expansion sites, and the clients like it that way.

“We keep the locations secret," said Ballard. "They all have codenames. We have 20 employees in our shop, and only three of them know where all the facilities are."

Netsolus is a 13-year old company that has historically focused on colocation and managed services. It discovered the Bitcoin market through its relationship with Butterfly Labs, a Kansas City company that builds custom ASIC hardware for mining virtual currency. Butterfly refers customers to Nimbus Mining, a cloud mining operation that hosts hardware with Netsolus and powers a chunk of its operations with Butterfly hardware.

These cloud mining companies still require Tier III-level reliability. "There is a small subset of the Bitcoin community that is offering (hosted mining) contracts," said Ballard. "We’re seeing a high uptick in the contract miners, but we expect that to subside over the next year. They need uptime, so they need the equivalent of enterprise-style requirements. The rest of the miners don’t need that."

Large-scale mining operations are focused on finding the lowest cost possible, which places a premium on cheap power and bare-bones infrastructure.

"Reliability and uptime are not that big a problem," said Josh Zerlan, VP of Product Development at Butterfly Labs, who was also a panelist at Inside Bitcoins. "You don’t need this huge infrastructure to support quadruple-nine uptime. If half the Bitcoin miners in the world go offline, that doesn’t stop the network. Density is the issue."

"In traditional data centers, you’re trying to find the right confluence of fiber, power and bandwidth," said Ballard. "Our bandwidth is negligible. It’s all about finding the right cost of power and finding enough shelving. We’re looking at old steel mills, and other sturdy facilities with good power."

In the meantime, Netsolus expects a continuing influx of smaller customers making the transition from mining Bitcoin at home. "They don’t expect to pay more than they pay for electricity to mine at home," said Ballard. "So that’s tricky."

The tipping point for the homebrew mining crowd is cooling, which introduces a seasonal component.

"Having a lot of mining hardware in your house isn’t a problem during the winter," said Ballard. "But the weather is getting warm. This is like Game of Thrones, except it’s 'Spring is Coming.' We’ll get a big rush of people for spring."