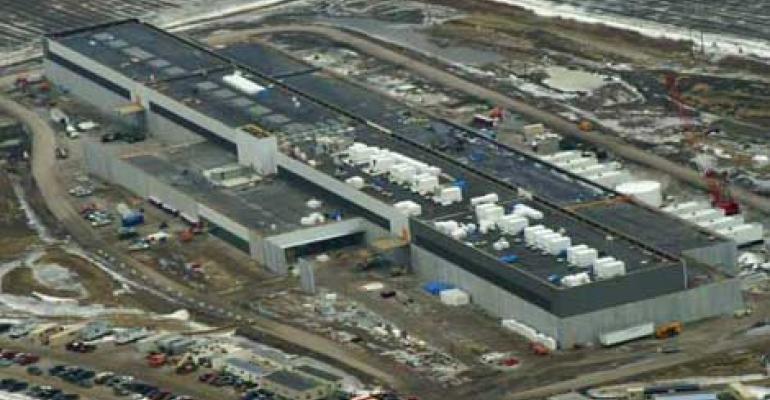 An aerial view of construction progress on Facebook&#8217;s new data center in Altoona, Iowa. The company is ready to begin construction on a second building. (Photo: Facebook)
Companies>Meta (Facebook)

Facebook revealed some aerial photos as well as a peek inside the data hall in its new, 100 percent wind-powered data center in Altoona, Iowa.

Facebook is giving us a peek at construction progress of its data center in Altoona, Iowa with some new photos. The company provided two new aerial views of the data center as well as a look at the interior data hall. The “shell” of the facility is well in place, eight generators are on site, and the framework for the data hall is coming together.

Once Altoona comes online, it will be a critical part of Facebook’s overall infrastructure. The building will be approximately 476,000 square feet, and the project currently averages more than 400 people per day working on construction, logging more than 372,000 hours on the project.

The Facebook Altoona data center was first decloaked back in April of 2013. After years of secret scouting missions, the company began building the $299.5 million first phase of the campus. As can be seen from the aerial photos, the facility is unusually long. The company plans to build a total of three data centers on its 200-acre  Altoona campus, which is nestled alongside Route 80 and has access to significant supplies of fiber and power.

While the first phase of Altoona retains Facebook's existing data center design, the company is developing some new, innovative design initiatives that were discussed at the Open Compute Summit in January. One involves using as a modular “chassis” approach to construction, shipping large pre-fabricated building blocks that can be rapidly put together, much like Legos, to create a building.

The chassis approach is much like the concept behind the assembly of a car on a chassis. The frame is built, and then components are attached to it on an assembly line. Cable trays, power busways, containment panels, and even lighting are pre-installed in a factory. It begins with a pre-assembled steel frame 12 feet in width and 40 feet in length.

The second design focuses on the use of IKEA-style kits filled with lightweight parts that can be assembled on-site to create rows of racks and ducting inside a data hall. Made famous by IKEA, the "flat pack" approach - you know when you buy a bookshelf and it comes in flat packages with easily assembled pieces - here, the walls of a data center are panelized so they fit into standard modules that are easily transportable to a site. 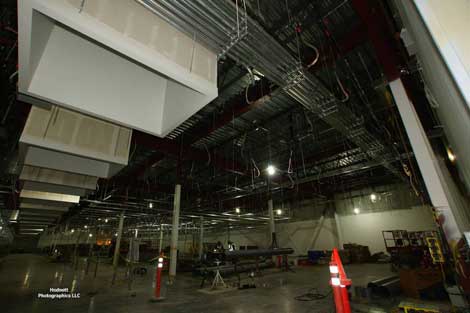 A look at the data hall inside the first phase of Facebook's data center campus in Altoona, Iowa. (Photo: Facebook)

A deeper look into the new design approaches is available here.

This approach to design will enable the company to contruct and deploy new capacity twice as fast as their previous approach, according to a blog post by Marco Magarelli. Having already built three massive data center campuses, it will be interesting to see these big ideas regarding design in action.

One of the deciding factors on choosing Altoona for the company’s fourth data center was the opportunity to help develop a new wind project in the state. This is Facebook's first major foray into renewable energy (although it has a 100 kilowatt solar array at its Prineville data center).

The new data center will be supported 100 percent by wind energy, another innovative move that made Greenpeace hit the “Like” button. The wind energy will be 100 percent supplied by a local plant. MidAmerican Energy won the contract and will build and maintain the Wellsburg wind plant. The wind farm will provide 138 megawatts of clean, renewable energy to the data center.

The company continues to innovate from the power right down to the server. While Altoona’s energy needs will be met entirely with wind, the company has additionally committed to being clean across its facilities worldwide.