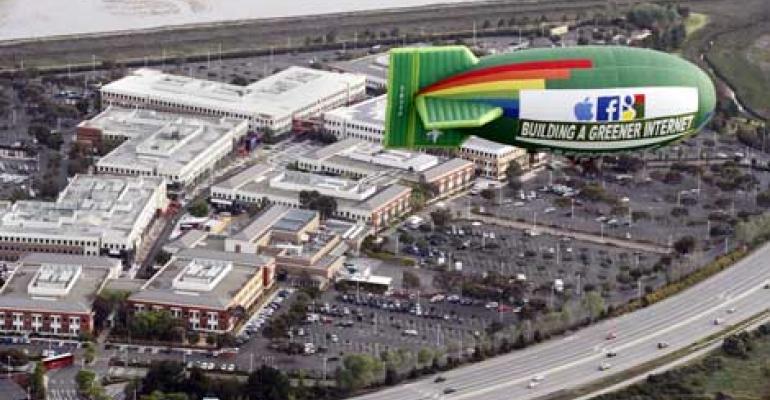 A blimp sponsored by Greenpeace flies over the Facebook headquarters campus in Palo Alto, Calif. congratulating Apple, Facebook and Google for their progress using renewable energy in their data centers in 2014. (Photo: George Nikitin, Greenpeace)
Energy

Greenpeace's campaign for renewably-powered Internet took to the skies over Silicon Valley Thursday, conducting a flyover of major tech company headquarters with a blimp festooned with messages highlighting the environmental group's new report on energy sourcing and sustainability.

The Greenpeace thermal airship bore several messages - one praising Facebook and Google for their use of renewable energy, and one challenging four other tech companies that it cited for their continued use of coal-derived power. The “Who’s Next to Go Green?” side bore the Twitter hashtag #clickclean below the logos of Amazon, Twitter, Netflix and Pinterest, four companies Greenpeace says are relying upon "polluting energy" in their data center operations.

The 135-foot long, 41-foot diameter thermal airship took off from the Palo Alto airport at 8:00 am and flew over the 101 highway rush hour commute on its way to Facebook’s campus, then over to Google’s campus, before returning to the airport to land after the 1 hour and 10 minute flight. Another Bay Area flight is planned for next week, depending on weather conditions. 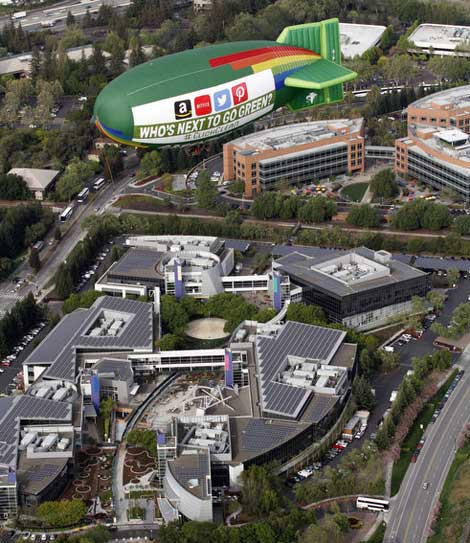 The Greenpeace blimp hovers over the Googleplex in Mountain View, Calif. Thursday morning. The sign on the airship challenges Amazon Web Services and its customers to make greater use of renewable energy in their data centers. (Photo: George Nikitin, Greenpeace)