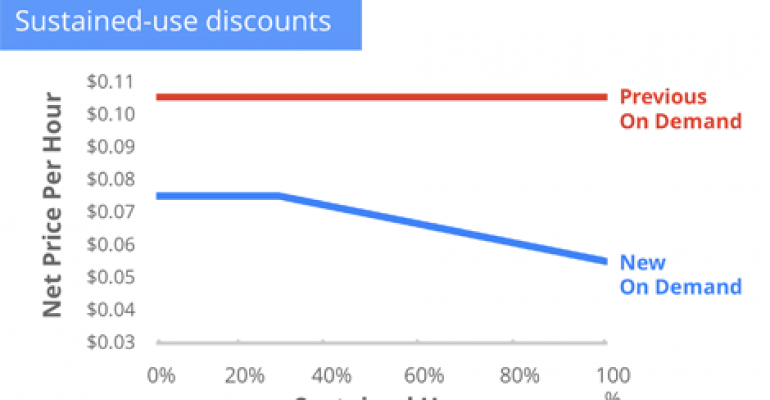 Google has announced major price cuts for its Google Cloud Platform services, including sustained use discounts automatically reward users who run VMs for over 25 percent of any calendar month. (Image: Google)
Cloud

Google introduced on-demand pricing for it's cloud, which slashes current prices and ensures that cloud pricing is more consistent with price drops in hardware. The company also introduced and demoed a slew of new features, including a seamless Live Migration DNS as a Service, and support for Windows, SUSE, and RedHat.

The company also introduced CloudDNS, as well as added a command line tool and Managed VMs, which blur the line between Platform as a Service and Infrastructure as a service, allowing developers to leverage the best of both worlds.

Google also added support for VMs using the Windows operating system, something that has long been in demand by customers. Preview support of Windows Server 2008 R2 is available starting today. The company also announced general availability of Linux operating systems from SUSE and RedHat Linux on their cloud.

"Pricing hasn’t followed Moore's Law: over the past five years, hardware costs improved by 20-30 percent annually but public cloud prices fell at just 8 percent per year," Hölzle wrote in a blog post summarizing the announcements. "We think cloud pricing should track Moore’s Law, so we’re simplifying and reducing prices for our various on-demand, pay-as-you-go services by 30-85%:

Google will have on-demand price reductions as well as sustained-use discounts, starting with a 32 percent price drop today. Storage dropped a staggering 68 percent, at .026 per GB, or .02 per GB DRA. BigQuery prices dropped 85 percent.

“The Google cloud platform is a central part of our infrastructure development, and we’re investing heavily in it to make it as great a platform to external users as it has been to internal users at Google,” said Hölzle, who said Google has laid the groundwork for years and years of future improvements. The aim is to make developers more productive.

With Google's new pricing, the on-demand price for VMs is now lower than the three-year reserve for most providers. Hölzle said there is too much complexity optimizing cost and performance. Hölzle says that current clouds force too many trade offs.

“Pricing is still way too complex,” said Hölzle. “It seems like you need a PhD to figure out the best option.”

That was reinforced by an analysis from cloud integrator RightScale that compared Google's new pricing to cloud market leader Amazon Web Services, which allows users to manage future capacity through the ourchase of reserved instances.

"The new Google sustained-use pricing avoids the complexity, lock-in, and upfront costs of AWS reserved instance purchases," RightScale notes. "Google users will automatically receive the best price for their level of usage, with no planning required on their part. However, tying the sustained-use discounts to Google’s monthly billing cycle could create an incentive to make decisions such as switching instance sizes on the monthly billing boundaries."

This kind of pricing is tricky for customers. Reserved instances have a purpose: they try to reward you for predictable sustained workload. With Google's approach to pricing, a customer's price begins to drop once they use a VM for more than 25 percent of the month, equating to a 53 percent discount over today’s prices. This applies to all instances of a certain type in a region. As long as the VM in aggregate is used more than 25 percent, customers get the discount.

One big feature is Live Migration in Google Compute Engine. “As a cloud provider, you’re faced with a dilemma," said Hölzle. "Because you can either have an up to date infrastructure - patch operating systems, upgrade, introduce new features and so on at a rapid pace - or you can provide long-running VMs to users. But you can’t really do both. Live Migration solves this dilemma and lets us provide both.”

Google's Chris Elliot gave a demo of Live Migration to show how seamless it is for customers. Elliot moved an application to a new physical machine live. The instance flashed yellow, signaling its move to a new physical host. An engineer in Seattle simulated a physical hardware failure, which triggered the live migration. 1080p video streamed while the instance was undergoing live migration. The migration occurred with no effect to the video.

The company can live migrate customers around hardware issues, giving customers the safest environment to work on. It has added intelligence to that layer It is completely transparent; customers can’t tell when live migration occurs and work normally. The only way they know is a little note in the operations log telling them of the migration. It also allows Google to upgrade infrastructure in the background with no negative effects to those hosted on its cloud. The instance retains the same IP and same configuration, only the physical machine has changed.

“There is a lot of innovation under the covers,” said Hölzle.

On the Big Data front, Google added predictable throughput for BigQuery, its tool for running SQL-like analytic queries against multi terabyte database. You can analyze any amount of data at 5 gigabyte increments with a chosen level of throughput at a fixed price. Compared to current industry pricing, it’s 75 percent less expensive.

The company also introduced DNS as a service, built and operated by Google, with a simple API and integrated into the Google console. You can now manage your network configurations and DNS in the same place.

The company has also blended PaaS and IaaS. Managed Virtual Machines Combines the freedom of the IaaS Compute engine, with the capabilities of the PaaS AppEngine. With just a few configuration line changes, you can take an AppEngine machine out and use it in Compute Engine.

A year ago in May Google Compute Engine went into preview, as well as PHP support for App Engine. The company added Layer 3 Load balancing in August. Demoed in November, it can handle a million requests per second from a cold start. It’s based on the same codebase that powers load balancing for google.com

In December, Compute Engine went into General Availability. The company then introduced cloud datastore, based on BigTable, the system that start noSQL revolution. In August, the company added encryption at rest for Google Cloud storage. Cloud SQL went into General availability last month.Offline disk import was added in June 2013.

The company has made improvements to BigQuery, added Dedicated Memecache, and added a mobile backend starter for iOS. This makes it easier to build applications for Apple phones in addition to Android. In December, it added Persistent Disks, and last month it released Cloud SQL into general availability, with a  99.95 percent Service Level Agreement. HIPAA support was added in February of this year as well.