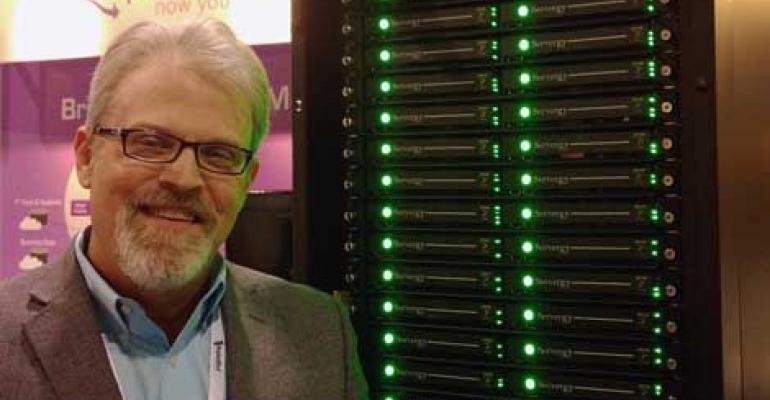 Servergy founder and CEO Bill Mapp in front of a rack of servers at a recent industry event. The company has unveiled its initial line of CleanTech servers. (Photo: Rich Miller)
Blades

Servergy recently released its first Cleantech server, a "brawny core" server about the size of a legal pad. But Servergy's ambitions go beyond just rethinking the form factor and power envelope for servers.

SAN JOSE, Calif. - Bill Mapp wants to create data centers that are both denser and greener. In 2009 Mapp founded Servergy, and set out to rework server design to pack more computing horsepower into a smaller footprint.

After four years in the lab, the company announced $20 million in funding late last year to support the launch of its first Cleantech server, a "brawny core" server about the size of a legal pad. Each Cleantech CTS 1000 server is a half-rack unit deep and uses about 100 watts of power, allowing users to build high-density solutions in a compact footprint.

But Servergy's ambitions go beyond just rethinking the form factor and power envelope for servers. At last month's Open Compute Summit, Servergy unveiled a prototype for a highly flexible new 64-bit server platform. The Cleantech Multi-Architecture Platform will support a range of processors - including x86, ARM, Power or MIPS - to create specialized computing solutions for applications that must move large volumes of data at high speed.

A Sweet Spot in Acceleration

"We're not just a server company," said Mapp. "I/O acceleration is really our sweet spot in this big data world we're living in." That need for speed and scale has importance in many areas of the next-generation data center architecture.

Servergy is an IBM business partner, and in November it raised $20 million funding from accredited investors to support the launch of its CleanTech servers.

Cleantech servers are based on Freescale Power chips and run PowerLinux software from SUSE. They are available in either DuoPak or QuadPack configurations, allowing users options for density and form factor within their racks. Here's a look at a CTS 1000 server: 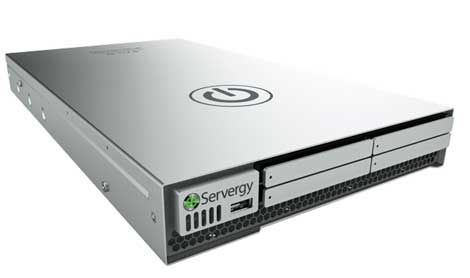 A close look at Servergy's CTS-1000 server, which is about the size of a legal pad. (Image: Servergy)

The servers are designed and built in the U.S., weigh only nine pounds, and feature two 10GbE and two 1GbE ports. The CleanTech CTS line uses Power Architecture technology, an instruction set architecture that spans applications from satellites to automotive control to servers. Initially developed by IBM, Motorola and Apple, Power Architecture technology has since gained support from the world's most innovative brands and become the preferred platform for many mission critical applications and markets.

“We went all the way back to the innovations lab drawing board and used a zero-sum step-function engineering approach from the ground up to create the next generation of hyper-efficient enterprise servers," said Mapp. "Our servers are small, fast, efficient, cool, quiet, light-weight, but also powerful and scalable enough to handle the rapidly growing data, space, cooling and energy demands of data center operators globally." 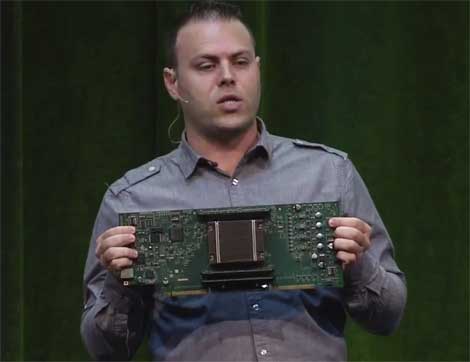 At the Open Compute Summit in January, Servergy's William Mapp displays one of the company's new motherboards that complies with the OCP GroupHug standard.

William Mapp showed off a motherboard that aligns with the "GroupHug" project, which creates a common slot architecture specification for motherboards that supports processors from multiple vendors. He said the new board allows a holistic approach to IT infrastructure solutions that can accommodate a range of processor options.

"We want to be able to step back, look at the workload, and say 'what is performing the best,'" said Mapp during his presentation. "We could go a lot of different ways. Benchmarking is required, and every watt makes a huge difference."