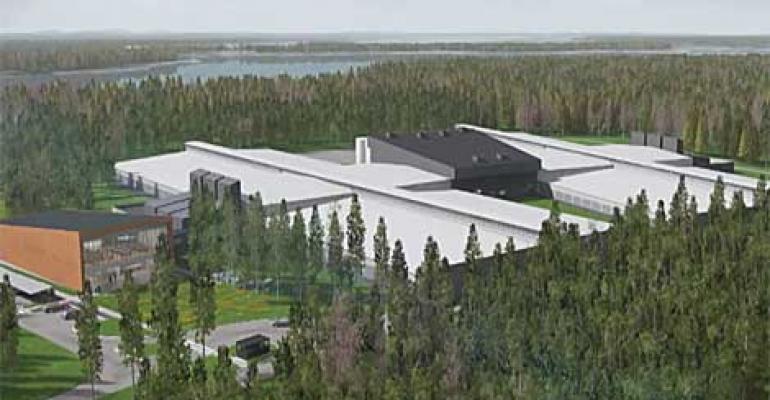 Facebook Rethinks How It Builds Data Centers: Legos or IKEA?

Facebook is working on ways to streamline its data center construction, but it hasn't yet decided whether to go the Lego route or try the IKEA approach. The goal is to create a repeatable design for a "Rapid Deployment Data Center" that can work anywhere in the world. 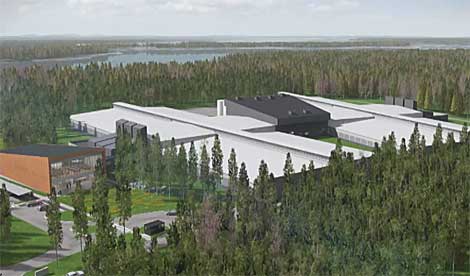 Is this what Facebook's data centers will look like in the future? This illustration depicts one of several new designs Facebook is developing. Click for a larger image.

SAN JOSE, Calif. - Is Facebook ready to ditch its penthouse? The company is working on ways to streamline its data center construction, but it hasn't yet decided whether to go the Lego route or try the IKEA approach.

Facebook has built three massive data center campuses, but wants to accelerate the process and create a repeatable design for a "Rapid Deployment Data Center" that can work anywhere in the world. The goal is to effectively cut construction time in half.

"We'd like to deliver twice the amount of data space in the time it would normally take," said Marco Magarelli, Facebook Strategic Engineering & Development team. "We wanted to find new ways of doing things faster and better. So we got together with some industry experts in data center design and lean construction approaches, like those often used in hospital buildings."

In a session at last week's Open Compute Summit, Magarelli discussed the outcome of this process, outlining two new design concepts that Facebook is considering for its future facilities. One design involves a modular approach to construction, shipping large pre-fabricated "building blocks" that can be rapidly put together, much like Legos, to create a building. The second design focuses on the use of IKEA-style kits filled with lightweight parts that can be assembled on-site to create rows of racks and ducting inside a data hall.

Both approaches would totally revamp the way Facebook cools its servers. The company currently employs a "penthouse" cooling system which uses the upper floor of the building as a large cooling plenum with multiple chambers for cooling, filtering and directing the fresh air used to cool the data center.

The new designs shift the cooling chambers to the perimeters of a single-story facility, dramatically shrinking the amount of real estate required for cooling.

"This opens up the possibility of removing structure," said Magarelli. "Can we take away the penthouse?" 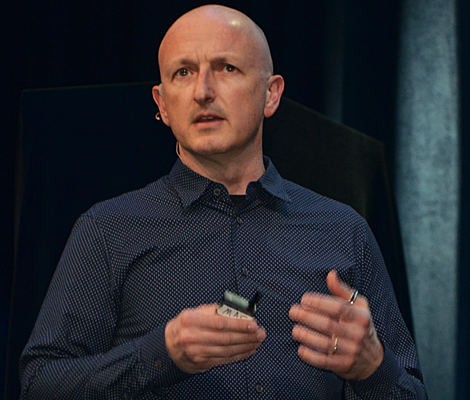 Let's take a closer look at both design concepts:

The first approach looked at new ways to package the infrastructure for Facebook's data centers, seeking to transport components in large building blocks that could be assembled on-site. This concept has been widely used with modular data centers, which use factory-built "skids" of power and cooling equipment to supply the back-end infrastructure, and containerized data halls to house servers.

Facebook prefers a data hall to modules, so it sought ways to containerize elements of its server area. Working with a vendor, it first examined whether it could fully package its containment systems and overhead ductwork.

"We looked at containerized solutions, but our hot aisle is 16 feet tall, which would be quite a logistical issue to transport over the road," said Magarelli.

Instead, they sought to package the above-rack ductwork for rapid transport and deployment.

"We would assemble these 40-by-12 foot modules (containing the cold aisle caps) that could then be shipped out to the site," said Magarelli. "Then we would deploy all these chassis across our data hall."

The idea would be to create three building blocks - data hall modules, electrical skids and mechanical units containing the cooling chambers - and bring them together at the construction site, delivering two data halls in the time it would take to build one.

Here's an overhead view of how this design would be put together, with data halls A and B:

What would the new cooling system look like? The mechanical units on either side of the data halls would house a series of cooling chambers featuring louvers, filters and fans that would manage the air temperature and humidity before it enters the data hall. Here's a visual depiction of the mechanical units at the outside of each data hall, which would include an air-handling systems. 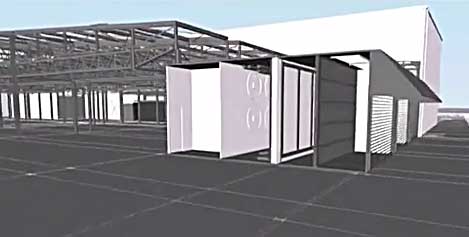 For a comparison with the existing penthouse systems, see our video posts: Facebook's Penthouse Cooling System and The Evolution of Facebook's Data Center Cooling.

The second vendor developed an approach using pre-packaged kits to speed the on-site assembly of Facebook's data halls. "We're all familiar with the IKEA model, where you go into a store, and you buy what you're going to build, and it's very efficiently packed," said Magarelli.

This design takes a different approach to construction of Facebook's aisles and containment systems. "Today we have a fairly rigid roof structure that needs to carry the weight of all our distribution, and we suspend all our structures," said Magarelli. "It requires a lot of work up on lifts and a lot of assembly in the field."

The new design would feature a kit of parts to assemble rows of racks that are supported by the floor rather than suspended from the ceiling. The construction kit features 8-foot by 14-foot panels, along with instructions to allow a construction crew to quickly assemble rows of cabinets and ductwork.

Magarelli says this approach builds on the fact that Facebook's construction teams are getting faster and more efficient with each successive build. "We wondered whether we could develop a package that we just send out to the site and assemble," said Magarelli. "We're projecting that we'll find great savings."

Since this approach involves a more lightweight approach to construction, Facebook wanted to test its durability. The company has created a mock-up of this design in a lab in Menlo Park.

"We're making a lot of progress on both of these concepts," said Magarelli, who said he would provide future updates as Facebook refines its concepts.