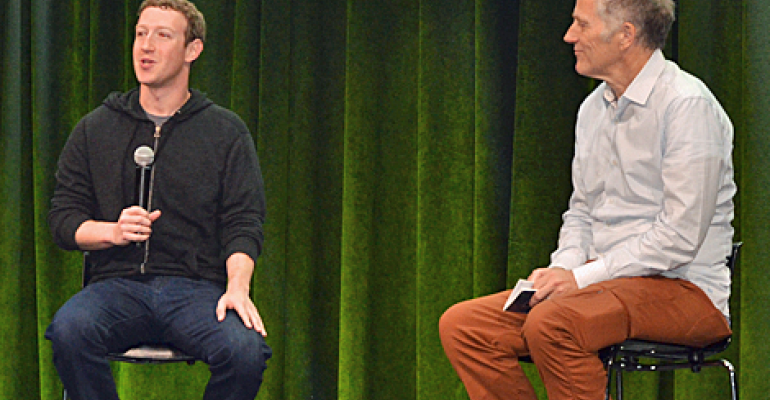 SAN JOSE, Calif. - Over the last three years, Facebook has saved more than $1.2 billion by using Open Compute designs to streamline its data centers and servers, the company said today. Those massive gains savings are the result of hundreds of small improvements in design, architecture and process, write large across hundreds of thousands of servers.

The savings go beyond the cost of hardware and data centers, Facebook CEO Mark Zuckerberg told 3,300 attendees at the Open Compute Summit in San Jose. The innovations from Open Compute Project have saved Facebook enough energy to power 40,000 homes, and brought carbon savings equivalent to taking 50,000 cars off the road, Zuckerberg said.

The innovations created by Open Compute provide a major opportunity for other companies to achieve similar gains, he said

"People are spending so much on infrastructure," said Zuckerberg, who discussed Facebook's initiatives with technology thought leader Tim O'Reilly of O'Reilly Media. "It creates a pretty broad incentive for people to participate."

The focus on open hardware was a logical outgrowth of the way the company views the world, according to Zuckerberg.

"Facebook has always been a systems company," he said. "A lot of the early work we did was with open systems and open source."

The $1.2 billion in savings serves as a validation of Facebook's decision to customize its own data center infrastructure and build its own servers and storage. These refinements were first implemented in the company's data center in Prineville, Oregon and have since been used in subsequent server farms Facebook has built in North Carolina, Sweden and Iowa.

"As you make these marginal gains, they compound dramatically over time," said Jay Parikh, Vice President of Infrastructure Engineering at Facebook."We're actually saving a ton of money."

The designs for Facebook's servers, storage units and data centers have since been contributed to the Open Compute Project, the non-profit community organization driving the open hardware movement.

This happened, Parikh said, because Facebook was willing to set aside the conventional ways that servers and data centers were built, and try something new. The Open Compute Project can extend these savings to other companies, he said.

"You really should be looking at OCP," said Parikh. "You could be saving a lot of money."