One of the ways Microsoft supports its cloud servers is packing them in ITPAC modules which can be deployed quickly to expand capacity in any location (Photo: Microsoft)
Companies>Microsoft

In a dramatic move that illustrates how cloud computing has altered the data center landscape, Microsoft is opening up the server and rack designs that power its vast online platforms and sharing them with the world. 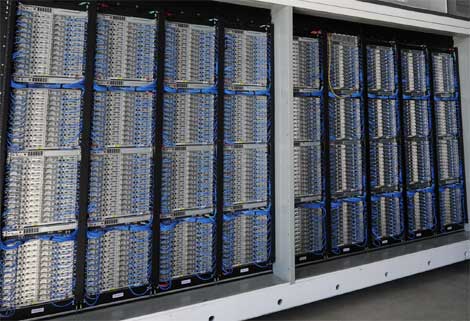 These are some of the more than 1 million servers powering Microsoft's Internet infrastructure. The company is joining the Open Compute Project and sharing the designs of its servers and storage. (Photo: Microsoft)

SAN JOSE, Calif. - In a dramatic move that illustrates how cloud computing has altered the data center landscape, Microsoft is opening up the server and rack designs that power its vast online platforms and sharing them with the world.

Microsoft has joined the Open Compute Project and will be contributing specs and designs for the cloud servers that power Bing, Windows Azure and Office 365. The company will discuss its plans tomorrow in the keynote session of the Open Compute Summit in San Jose.

Why would Microsoft, long seen as the standardbearer for proprietary technology, suddenly make such an aggressive move into open hardware?

“We came to the conclusion that by sharing these hardware innovations, it will help us accelerate the growth of cloud computing,” said Kushagra Vaid, General Manager of Cloud Server Engineering for Microsoft. “This will directly factor into products for enterprise and private clouds. It's a virtuous cycle in which we create a consistent experience across all three clouds.”

Azure Clouds for the Enterprise

The designs and code for Microsoft's cloud servers will now be available for other companies to use. A larger circle of vendors will be able to build hardware based upon the designs, which in turn will allow enterprises to create hybrid Windows Azure clouds running on the same hardware across its on-premises data centers and in Microsoft’s cloud.

The Open Compute Project (OCP) was founded by Facebook in 2011 to take the concepts behind open source software and create an “open hardware” movement to build commodity systems for hyperscale data centers. It has spurred the growth of a vibrant development community, which is now expanding its focus to cover network equipment.

Microsoft now wants to reap the benefits of that ecosystem, which has rapidly transformed Facebook’s initial server and storage designs into commercial products. It also hopes to expand OCP’s efforts to include management software.

"The depth of information Microsoft is sharing with OCP is unprecedented," said Bill Laing, Microsoft Corporate VP for Server and Cloud, in a blog post. "As part of this effort, Microsoft Open Technologies is open sourcing the software code we created for the management of hardware operations, such as server diagnostics, power supply and fan control. We would like to help build an open source software community within OCP as well."

Competition in the Cloud

Microsoft’s move to align with Open Compute reflects the intensifying competition in cloud services, where Microsoft, Google and Rackspace are among the players seeking to wrest share from market leader Amazon Web Services. Tapping the OCP’s nimble ecosystem of hardware vendors could accelerate innovation on Microsoft’s cloud platform, resulting in an integrated hybrid cloud platform that can keep pace with AWS.

Microsoft’s contributions to OCP will include hardware specifications, design collateral (CAD and Gerber files), and system management source code for Microsoft’s cloud server designs, which will also be posted to the open source code repository GitHub.

This effectively creates a second hardware track within Open Compute, as Microsoft’s designs have followed a slightly different path than the initial OCP servers.

12U Chassis, Server and Storage Blades

The primary building block for Microsoft’s infrastructure is a 12U chassis which can house 24 half-width blades, which can be either servers or storage blades. As with the OCP’s Open Rack, the power supplies and fans have been shifted from the server to the chassis level.

Microsoft also uses a shared signal backplane, and has shifted all of the cable connections to the back of the chassis, allowing system admins to quickly swap servers and storage by plugging the blades into the trays within the chassis. Up to four of these chassis can fit into an extra-tall 52U rack, allowing Microsoft to deploy up to 96 servers in a single rack. For more details, see Closer Look: Microsoft's Cloud Server Hardware.

“One of our goals in creating this hardware was to accommodate different requirements for all these workloads,” Vaid said. “It is a hyperscale design, but still provides a balance of driving towards hyperscale and balancing a wide range of workload requirements. It is our hope that the community will be able to adapt it in a much more meaningful way.”

Microsoft may also benefit from OCP’s development of open network switches, which hold the potential to dramatically slash the cost of networking hardware. Microsoft moves enormous volumes of data around the globe, operating a huge edge network that manages content delivery for Xbox Live and other online services.

Microsoft's entrance into OCP has implication for its hardware partners. Microsoft has historically worked closely with Dell and HP, which in recent years have been losing ground in the hyperscale server market to OCP-centric original design manufacturers like Quanta, WiWynn and, Synnex/Hyve.