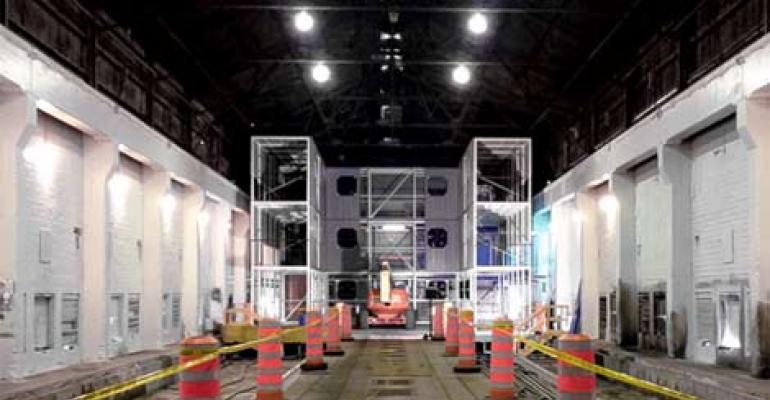 French hosting company OVH is adapting its innovative data center design for its new facility in Quebec, where it plans to deploy up to 36 cube-shaped "hosting towers" filled with servers. 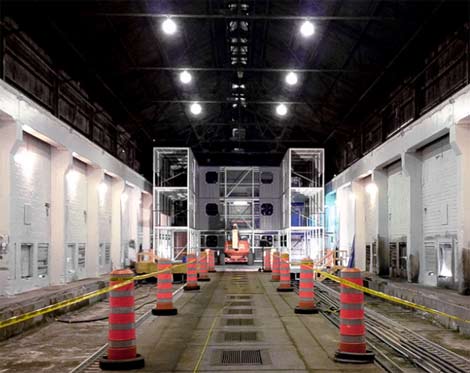 The framework for a "cube" assembly rises inside the OVH data center in Quebec. Each four-sided stack of containers can hold approximately 10,000 servers. (Photo: OVH)

The Cube has come indoors. French hosting company OVH is adapting its innovative data center design for its new facility in Quebec, where it plans to deploy up to 36 cube-shaped "hosting towers" filled with servers. This approach builds on a design concept that OVH pioneered at its facility in Roubaix, France and replicated using shipping containers at a second site in Strasbourg.

The company’s newest campus in Quebec is a unique facility, housing a factory to assemble servers as well as the data center to house them. It is the engine for OVH’s ambitions in North America, where it hopes to sell hundreds of thousands of servers.

OVH is super-sizing its design in Beauharnois, Quebec, where it houses its servers inside a former Rio Tinto Alcan alumnium plant located alongside a dam that will provide 120 megawatts of hydropower to support the facility. The property includes several long buildings that serve as air handlers, using an airflow design reminiscent of the Yahoo Computing Coop.

"This building was already designed to let the air in from different sides and have warm air rise and exit out the top," said Germain Masse, the Chief Operating Office of OVH.

Within these large halls, OVH is deploying the "data center within a data center" concept. Each building is filled with multiple hosting towers. Fresh air enters from the exterior wall, travels through the racks of servers, and then exits the IT corridor via large fans that vent the air outside into the open center.

Last year OVH North America built two hosting towers capable of housing 10,000 servers each. Today OVH has nearly 15,000 servers in production at Beauharnois (BHS for short). During the first quarter of 2014, a third tower will be built.

"We can deploy a new cube every four months or so," said Masse. "You can wind up spending a lot of money so we do it in phases."

The property can accommodate as many as 36 towers, creating a potential capacity of 360,000 servers. Here's a look at the data center: 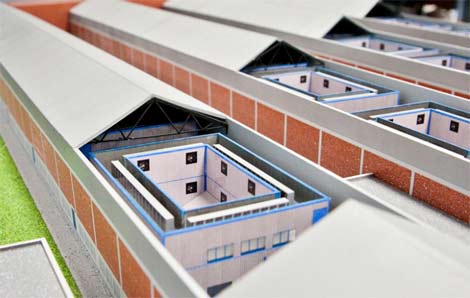 A cross-section cutaway provides a visualization of how the cube structures fit inside the larger building at the OVH Quebec data center. (Image: OVH) 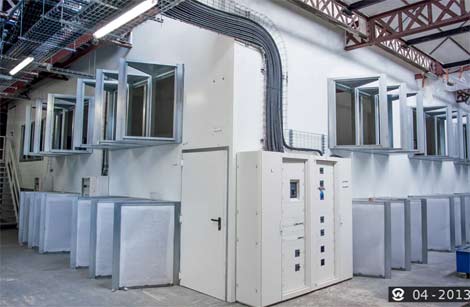 A close-up of a finished hosting tower, with the power and cooling infrastructure in place. Each assembly can house up to 10,000 servers.