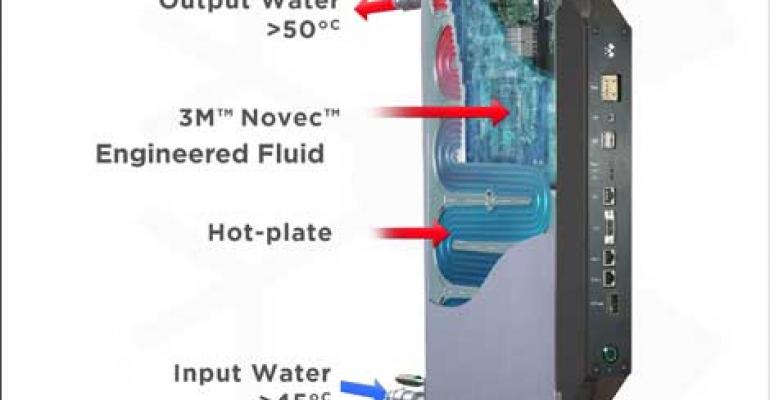 Liquid cooling specialist Iceotope has raised more than $10 million in venture capital funding from investors, and will work with Schneider Electric to commercialize its technology, the company said this week. 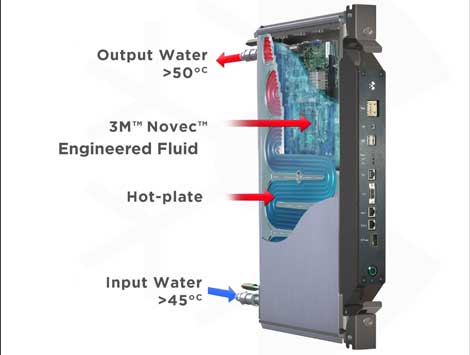 A diagram of the Iceotope liquid cooling system, which uses 3M Novec fluid and water in a heat exchange system. (Image: Iceotope)

After years in product development, liquid cooling specialist Iceotope has raised more than $10 million in venture capital funding from investors, and will work with Schneider Electric to commercialize its technology, the company said this week.

Iceotope describes its solution as "free cooling anywhere." It encapsulates servers in heat pipe modules containing 3M's Novec fluid as its heat removal medium. The company was founded in 2009 and made a brief trip through administration in 2011 before restructuring. On Monday the company announced that it had raised a Series A funding round of $10 million led by Aster Capital and Ombu Group, along with a strategic sponsorship with global energy conglomerate Schneider Electric.

The funding is the latest sign of support for liquid cooling technologies, which are moving to the fore as more companies adopt high-density IT infrastructure. In September Intel said immersion cooling is highly efficient and safe for servers. In October, researchers from Lawrence Berkeley National Laboratory reported that liquid cooling used less energy in certain circumstances than air-cooled servers.

Isotope could also see major benefits from its alignment with Schneider Electric, a major player in the data center power and cooling. "We have been looking at various technical approaches to liquid cooling for years and concluded that Iceotope has created a scheme that addresses performance and user experience expectations," said John Bean, director R&D for Data Centre Cooling at Schneider Electric.

“This really is the deal of the century for us” said Peter Hopton, founder and CEO of Iceotope. "As a start-up in the north of England, it’s fantastic that Iceotope’s technology has attracted the investment of an international consortium. We strongly believe that our technology has the potential to revolutionize the HPC and data centre industry and we’re thrilled that it’s not gone unnoticed. The support provided by our new investors, along with a new partnership opportunity with Schneider Electric, will have a big impact on the development of the company and will allow Iceotope to build a global product ecosystem based on Iceotope liquid cooling platform.”

In Iseotope's approach, each server motherboard is completely immersed in a sealed bath of liquid coolant which passively transfers heat away from the electronics to a heat exchanger formed by the wall of the module, where water is continuously re-circulated and cooled. The company says the system can work with water supplies of up to 50 degrees C and still keep servers cool. The Iceotope solution comprises a range of hot-swappable compute modules from Intel, AMD and other vendors that slide inside a high density, low power and fully cooled cabinet.

Iceotope installed its first production system at the University of Leeds in early 2012, and recently equipped the 3,200 square foot Poznan Supercomputing and Networking Centre in Poland.

"Iceotope can deliver breakthrough energy efficient solutions into the area of data centres infrastructure," said Jean-Marc, Managing Partner at Aster Capital, a leading clean tech venture firm backed by Schneider, Alstom and Solvay. "We have been impressed by the effort and the progress made by the Iceotope team in the last couple of years and we envision that, thanks to our corporate sponsors, especially Schneider Electric and Solvay, we will be able to strongly support Iceotope development and make it the future liquid cooling market leader within HPC and data centre markets.”

Here's a look at the Iceotope system in action. In this video, Richard Barrington demonstrates the hot-swappable capabilities in an Iceotope intallation at the University of Leeds: